For economic truth-tellers like the Miles Franklin Blog, we are living through Dark Ages – which commenced when the global economy peaked in 2000, and expanded when it permanently broke in 2008.  Its cancerous impact has become ubiquitous starting with the no-holds-barred corruption of economic data – as exemplified by this damning article published this morning.  Moreover, financial markets have been temporarily commandeered by overt and covert money printing, funding “manipulation teams” such as the President’s Working Group on Financial Markets (stocks), the Federal Reserve (bonds), the Exchange Stabilization Fund (currencies), and the gold Cartel.  Moreover, Wall Street has developed and deployed catastrophically dangerous “financial engineering” techniques – utilizing derivatives, high frequency trading algorithms, and other illegal and/or immoral tactics to control prices, backed both explicitly and illicitly by the Western seats of power.  And of course, relentless propaganda is emitted from not only the “evil troika” of Washington, Wall Street and Washington, but so-called “good guys” – who like typical bottom feeders, seek to skim from a dying system.

Sure, we’re “incentivized” to speak positively of precious metals, and negatively of “anti-precious metal” factors like the positive developments in the economy and geopolitics.  However, “talking our book” does nothing to influence outcomes; and more importantly, we have been speaking this way since the PM bull market – and global economic conflagration – commenced at the turn of the century.  In other words, unless one has a blatant anti-PM agenda – or a specific beef with us personally – it would be impossible to dispute a single macro-economic forecast we have made.  From the tech and real estate bubbles, to monetary inflation and economic stagnation – much less, dramatic gold and silver outperformance despite an omnipresent suppressive Cartel – the simple logic we have applied has served us and our readers, well.  Again, we are decidedly not financial advisors; but instead, economic commentators seeking to educate of the time-honored inevitable result of fiat currency fueled credit expansions.

Throughout the past year’s “tapering” propaganda scheme – which frankly, commenced April 12th, 2013 when following a “closed door meeting” between Obama and the ten largest “too big to fail” bank CEOs the previous day, gold and silver were assaulted by tens of billions of naked paper shorts, yielding historic two-day declines of $230/oz. and $5.50/oz., respectively.  Since then, amidst collapsing global economic activity; soaring inflation and debt accumulation; generational unrest, geopolitical tension, and currency volatility; and unprecedented money printing, the Cartel has increased PM suppression exponentially relentlessly attacking PM prices every second, of every day.  Thus, whilst the power of the printing press – and covert market support – have been utilized to bull stocks and bonds to record levels of overvaluation, gold and silver prices have been driven well below the cost of production despite historic physical demand and miniscule above ground inventories.  The fragile “premise” behind such action has economic “recovery.”  However, even the most jaded market observer realizes American activity has weakened to its lowest level since the 2008-09 crisis, whilst global activity – as exemplified by the nearly all-time low level of the Baltic Dry Index – is even worse.

Here in the States, where the nation’s “reserve currency” status and advanced “financial engineering” technology has created the widest divergence between financial markets and economic reality, we’re told “deflation” is our greatest enemy – as the cost of living surges to record highs, and inexorably declining real wages cause more than half the population to rely on government entitlements.  Meanwhile, we’re supposed to be “encouraged” by record low interest rates – when in fact, only the “1%” receive them whilst the remainder face surging debt service costs. 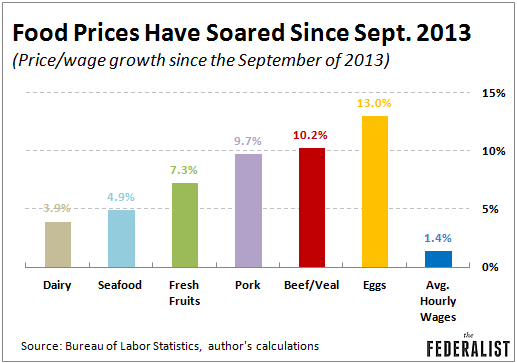 If low interest rates were a panacea, we wouldn’t be experiencing two-decade lows in home ownership and mortgage purchase applications, or a so-called “housing boom” that only boosted prices in “1% homes” above $1 million; which, by the way, have already started rolling over, per yesterday’s “unexpected” Case-Shiller decline.  Let alone, a nation where an astonishing 35% of consumers are currently being pursued by debt collectors – or a world where six years of “ZIRP” – and in some cases “NIRP” – has produced nothing but debt, inflation and stagnation. This morning, we started with ADP’s “adjusted” employment data falling far short of expectations – including just 3,000 new manufacturing jobs in a nation of 321 million people, amidst a veritable ocean of major layoff announcements, such as Microsoft last week and Amgen this morning.  I wonder what the “non-adjusted” numbers were; or, for that matter, if the 3,000 manufacturing jobs were even full-time.  Either way, now that ADP’s sole goal is apparently to “goal-seek” its way to the BLS’ own fraudulent jobs numbers, the odds point to an NFP disappointment on Friday; let alone, when its certain-to-be horrific internals are analyzed.

Fifteen minutes later, we were treated to the “crown jewel” of economic data fraud when 2Q GDP was reported to have surged by a ridiculous 4.0%.  Never mind the BEA’s own set of unsubstantiated “adjustments,” or the fact that a whopping 1.7% of said 4.0% “growth” was due to inventory building; likely exemplified by the record channel stuffing at the nation’s worst company, Government – General – Motors.  Let alone, the insinuation that “personal consumption” was up 2.5% when retail sales rose just 0.8%, or that durable goods spending rose a whopping 14.0% despite durable goods orders rising by just 0.5%.  Or, of course, the “pink elephant” in the room – of the essentially guaranteed likely wildly volatile revisions GDP data have engendered in recent years.

In the report’s aftermath, PM prices actually surged higher – with gold, for the umpteenth time in the lead-up to this week’s COMEX options expiration capped at exactly the key round number of $1,300/oz.  Silver has been fighting its own war in the mid-$20s with the Cartel as intent on taking out its 200 DMA at $20.22 as gold’s at $1,287/oz.  Even with the upcoming “key attack events” of this afternoon’s FOMC policy statement and Friday’s NFP employment report, support will likely be strong around these levels.  Plain and simple, metals cannot be produced profitably at these levels; while cumulatively, the mining industry cannot survive much longer at these levels.  Moreover, data fraud like today’s – no doubt, generated to “cover” the Fed’s statement – will undoubtedly isolate America’s economic “island of lies” further urging accelerated global PM demand.  As for the all-important 10-year Treasury yield, its risen back to 2.53% ahead of the FOMC statement pressuring equities despite sitting well below the 2.60% “line in the sand” the Fed so desperately wants rates above.  No doubt, they’ll carefully craft their statement to reflect a non-committal stance toward policy change, as they know the economy is not really recovering with equal conviction that an incrementally more hawkish stance could yield plunging financial markets.

Putting this whole charade to a reality check, I was listening to CNBC on my way home from the gym when the fraudulent GDP number was published.  The CEO of Aetna, America’s third largest healthcare provider was asked, “Are you living in a 4% world?”  His answer was a resounding no, followed by comments that “we are still seeing layoffs and group attrition in the large employer segment.”  And this, from one of the largest benefactors of America’s lobbying establishment; let alone, Obamacare.

We’re quite curious how successful TPTB will be in influencing economic sentiment via their post-FOMC and NFP propaganda and market manipulations.  Frankly, we don’t care – as ultimately, the reality that worldwide “QE to Infinity” is here to stay must be universally recognized; likely, sooner rather than later.  And when it does, the reality of a world much closer to negative than positive 4% will permeate public consciousness – and investment decisions no matter how hard TPTB attempt to mask them.