Why do I spend so much time discussing collapsing oil prices, you ask? Well, for one, because as we wrote back on October 15th – when WTI crude was $83/bbl, compared to $43/bbl this (Monday) morning – “crashing oil prices portend unspeakable horrors.” And this, just a week after October 7th’s “2008 is back“; as obvious signs of global economic collapse were evident before the price of the world’s most important commodity crashed. As for said “unspeakable horrors,” the political, economic, and social ramifications will be devastating here in the States – where hundreds of high cost, junk-bond financed shale producers face certain bankruptcy, and one-third of S&P 500 capital expenditures dramatic downward revisions. That said, the overseas impact will be still uglier – where everyone from corrupt, inefficient state oil companies to greedy socialist governments desperately need cash. And care of the the global flight to the U.S. dollar’s liquidity that threatens to go parabolic, foreign governments and citizens are watching their currencies collapse in unprecedented fashion. To wit, Saturday’s Audioblog was titled “Death of the BRICS – and with them, the entire Global Economy”; and lo and behold, on Sunday, massive protests throughout Brazil demanded everything from President Rousseff’s resignation to a military coup. Yes, my friends, things are getting ugly out there; and believe me, this is just the tip of the iceberg – as plunging oil prices are just as much an “Achilles Heel” to TPTB’s can-kicking goals as surging gold and silver prices.

Of course, the other part of my interest in oil prices stems from having spent ten years as a Wall Street buy-side and sell-side energy analyst.  Thus, I have a vast, broad knowledge of how the global energy industry works, which I intend to share with Miles Franklin Blog readers.  Based on the sum total of two decades of observation and research, it is my strong belief that crude oil has NEVER had a worse supply/demand imbalance; which ominously, appears likely to get a lot worse before it gets better, as the deadly combination of massive overcapacity, record inventories, significant Middle East supply additions, and the aforementioned “Frack-Log” run headlong into weakening demand, care of an historic economic Depression.  And if anyone wants to play “devil’s advocate” with our assumption that WTI crude will challenge the 2008 spike low of $34/bbl, we’d like to show some pictures to slam the point home.  And no, OPEC won’t “save the day” with production cuts; as not only are most OPEC nations experiencing massive economic contraction; currency collapse; and budget deficits; but their leaders know full well that the only chance the industry has for long-term health is to bankrupt high cost shale oil producers.

To wit, this fantastic article by Wolf Richter depicts just how ugly the energy collapse is becoming – and equally worrisome, how unlikely it is to improve anytime soon. To that end, let’s start with the U.S. rig count, which supports a significant amount of corporate capital expenditures; and consequently, goes a long way towards explaining why not only are S&P 500 earnings now expected to decline in 2015, but why the Fed’s own economic model now anticipates first quarter GDP growth approaching ZERO.   Yes, the Baker Hughes U.S. oil rig count has plunged by an astonishing 46% since October, putting it on a par with the 60% rig count collapse in late 2008 to early 2009, when WTI crude plunged to $34/bbl. Only this time around, the shale oil bubble pushed the rig count so high, it would have to fall another 59% just to get back to its 1987-2011 average! 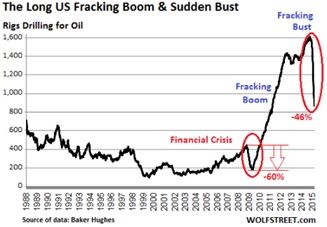 And the scariest part of all, is that U.S. crude oil storage may well be 100% full by this summer – yielding the potential of not only a near-term rig count plunge of this magnitude, but prices falling below the 2008 lows. To that end, the below chart is one of the ugliest I have ever seen; essentially, re-defining “aberration.” To wit, in 20 years of following the oil and gas markets, I have never seen anything close to the current, skyrocketing level of U.S. crude oil inventories. 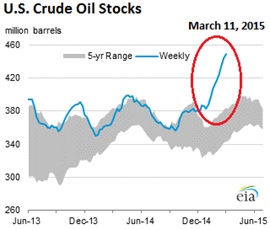 That said, what’s even more terrifying is the fact that despite the 46% oil rig count plunge, U.S. energy production continues to rise – hitting a new all-time high of 9.4 million barrels per day last week. 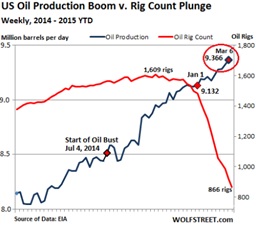 Worst of all, I haven’t even discussed the namesake of today’s article yet; i.e, the “Frack-log” of potentially dramatic production increases if and when prices rebound; and again, for the foreseeable future, the operational word is “if.”  To wit, the current shale production strategy of “stockpiling” completed wells, but holding off on fracking (adding chemicals that cause oil to be released) until prices become more economic.  In other words, not an oil backlog, but a “frack-log” of potential supply increases; care of the aforementioned, historic explosion in oil drilling, destined to overhang U.S. supply for as long as the shale oil industry hangs on.  And given that it’s financed with $500 billion of leveraged loans and junk bonds – most of them heavily underwater – you can bet moronic creditors will “extend and pretend” such loans as long as possible; to both avoid the painful reality of write-downs, and hope and pray the government decides to bail them out (with printed money, of course).

Well, it’s mid-morning Monday, and the madness continues, in full force. European stocks and bonds – except for Greece, of course – are on an historic tear; unquestionably, “front-running” the 16+ month ECB QE program that started last week, irrespective of the fact the European political, economic, and social environment has not been worse in centuries; or, for that matter, European financial assets have never been more overvalued, by a long shot. Meanwhile, with WTI crude down another three-plus percent to a new six-year low of $43.20/bbl as I speak, the PPT is doing exactly what it did on Thursday; i.e., following up Friday’s steep (albeit, “hail mary” lessened) equity losses by executing it’s time honored rule that “all bad days must be followed by good ones.” Throw in the fact that the Empire State Manufacturing Index missed expectations, with the new orders component hitting a 16-month low; the NAHB housing index plunged from 55 to 53 (versus expectations of 56); and not only did February Industrial Production come in at +0.1% versus the +0.3% estimate, but Manufacturing production declined by 0.2% whilst January was revised from positive 0.2% to negative 0.3%; and you can see just how comical the market rigging has become.

Remember, Janet Yellen delivered “the most dovish FOMC statement in memory” to Congress just two weeks ago; and thus, most likely, Wednesday’s policy statement will be more dovish still. As noted in this weekend’s Audioblog, the only way the inevitable “currency carnage,” the PPT and gold Cartel are going berserk trying to maintain “stability” ahead of Wednesday afternoon’s FOMC statement and Whirlybird Janet press conference.

That said, “Economic Mother Nature” always wins; and as she’s already “recaptured” nearly every global market, it’s just a matter of time – perhaps a very short amount; before “last to go” markets like paper gold and silver are “recaptured” as well – particularly as the mining industry, as we speak, is in a state of all-out implosion.