Much speculation abounds regarding China’s gold holdings.  They officially claim 1,054 tons as of April 2009.  We suspected they might “re” announce their holdings again last year at this time as it was five years after their last announcement and China has a habit of “five year plans”.  Alisdair Mcleod believes they have 20,000 tons or more which very well may be the case, I can easily make a case their holdings are far in excess of 10,000 tons just from the data since 2009.  In the words of our newest presidential candidate, “at this point, what difference does it make?”.  We’ll get to this shortly.

Before getting into the answer to this question, it might be better look at China’s “bubbles” first. 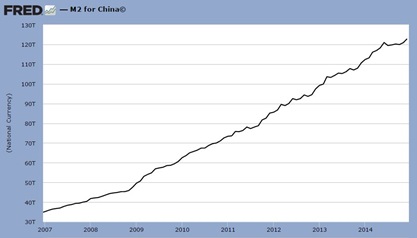 As you can see, China’s money supply has gone from 30 trillion yuan to over 120 trillion yuan in 8 years.  The growth rate compounds out to about 18% annually.  The following chart shows their money supply growth slowing drastically, China will need to reflate soon! 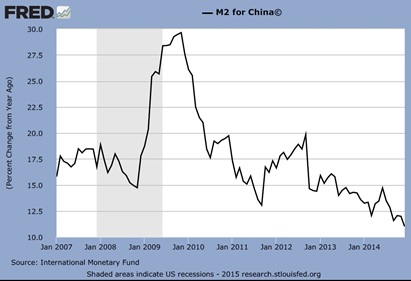 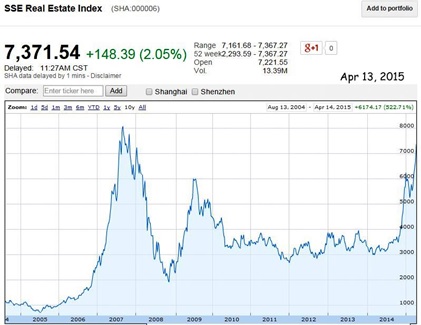 Their market has virtually doubled in over 90 days, is this “normal”?  Could this be a function of the market anticipating a reflation in money supply …or maybe a devaluation of the yuan versus a marked up gold price?  I’m not sure but putting their money supply together with market action tells me one of several things.  Money supply must begin to grow more rapidly soon, the yuan will need to be devalued or their market values are unjustified, something must give.  Add to this the fact China’s economy (maybe with slightly cooked numbers) is growing slower than any time in the last six years and it becomes even more clear, China must do something soon.  It is my guess and has been for quite a while, China will pull a page from FDR’s playbook and revalue gold versus the yuan …and the yuan versus other currencies from top to bottom.

So, why exactly does it matter how much gold China has accumulated and what are the ramifications depending what the number is?  First, if the number comes in “large” (it will), it means China “likes gold” and believes it to be a worthy monetary reserve asset.  A large number would give gold China’s “stamp of approval” so to speak.

Next, we have the “mathematics” to the equation.  If the number comes in anywhere near 10,000 tons, the natural question then becomes “where oh where did it all come from”?  This is a VERY important question because as I’ve said many times before, gold can only come from current supply and also from above ground supplies in vaults.  We know the total annual global supply (ex China and Russia) is about 2,200 tons of which China has chewed up a very large percentage over the last six years.  Total global production has been 11,000 tons over the last six years, we know India and Russia have been importers, not to mention all the other geographical demand and jewelry.  A number even close to 10,000 tons will raise the question of “how?”, how could China have accumulated this much gold if the world is not producing enough to make the math work?  In other words, if China bought virtually all of the global supply, what was used to satisfy the rest of the world’s demand?

The answer is easy and so will be the reaction.  The gold MUST have come from Western vaults, namely N.Y. and London.  It would also explain the refineries working 24/7 to melt 400 ounce bars and create kilo bars …they were in fact heading to China!  The big questions will be “which vaults?” and then of course “who’s gold was it?”.  This really matters because a number of 10,000 tons or more would most likely mean the U.S. has dishoarded its gold …and/or sold gold which belonged to someone else.  It will bring up the rule of law if the gold is someone else’s, it will bring up Constitutional law if the gold came from Ft. Knox, West Point or another depository.  Please remember that five years ago or so, gold on the market was turning up which had very similar, if not identical “fingerprints” to our own “coin melt” from the 1930’s.  To me, this was as big a telltale sign as gold turning up in 1989 with the “Czar’s stamp” on it.

The report of 10,000 tons or more held by China will on its own drive gold prices exponential because of the logic that market participants will connect swiftly.  Between the “stamp of approval” and “where did the gold come from”, people will understand the West were the sellers.  Does selling one’s gold make your currency weaker?  Of course it does.  Does a weaker currency make it harder to accumulate gold?  Again, yes.  It is my contention that not only will a weaker currency (the dollar) make it harder to “catch up” and replenish the empty vaults, China will have incentive to “help this process along” by forcing the price higher and more difficult to accumulate.

As mentioned and illustrated above, China has not been immune to the bubblemania gripping the world.  They are living their own bubble and have exploded their own money supply yet now have the need to goose it again.  If this reverses and becomes an outright contraction, China will be faced with the same dilemma the U.S. was in 1932-1933, they will need to re price gold higher in an effort to devalue their currency and reflate their own system.  It is for this reason I believe they will “set” a price and bid for any and all gold similar to what FDR did when gold was revalued to $35.

A holding’s announcement and higher bid will do much for China.  It will cement their position of financial strength and also lock many buyers out …not to mention turn some holders into sellers.  Thus increasing China’s holdings even more.  The higher gold price will act as a “filler” for many of the losses China will surely take from paper financial holdings.  A higher gold price will be their internal financial penicillin assuring the financial wounds heal rather than spread and infect the entire body.  Quite oversimplified but please understand this has been the remedy many times before throughout history, either willingly or dragged by the ears!