Chinks in the Armor

Unquestionably, the global economy is at its lowest point in generations and sadly the path of least resistance is down.  Western bankers and politicians created this mess by abandoning the gold standard in 1971 and used the subsequent “free money” Ponzi scheme to create an unprecedented, unpayable mountain of debt.  Consequently, current Western “leaders” are using every bit of “financial engineering” technology imaginable to mask it; in the best-case scenario, preserving a terminally cancerous status quo a few years more.  From covert money printing to 24/7 market manipulation, widespread propaganda, and fraudulent accounting, no interventionist stone has been unturned in the name of “kicking the can” that last mile.  However, it is impossible to usurp “Economic Mother Nature” indefinitely; and now that the “diminishing returns” of such deceptions are becoming impossible to hide, it’s just a matter of time before the “chinks in the armor” turn fatal.

With that background, I have many “chinks” to discuss starting with the gold manipulation the MSM assures us is not possible – even if “sixth sigma” trading anomalies occur every single day.  Take for instance, the below charts of the COMEX open on Monday and Thursday.  Do they look just a bit similar to you – with gold stopped by the same “Cartel Herald” formation at exactly a 1.0% gain, just as ten-month “line in the sand” at $1,300/oz. was crossed?

Or for that matter, today’s COMEX open in which gold, amidst some of the thinnest global market conditions of the year (excluding crude oil surging toward last summer’s highs), gold suddenly plunged $5/oz.  Don’t forget, Tuesday is COMEX options expiration day; which only exacerbates the manipulators “defense” of key numbers like $1,300/oz. gold and $19.50/oz. silver.

I know, I know.  That doesn’t “prove” manipulation, since no one admitted it or was convicted of such.  That is, until yesterday when the UK Financial Conduct Authority fined Barclays a £26 million for manipulating gold prices citing a specific trader for “sending out a burst of orders aimed at moving the price” in an effort to pull off a “mini puke” of the price.  Really, a mini puke? You mean like the one depicted above?

The mainstreaming of gold manipulation – per the damning video aired by German television yesterday – is gaining momentum.  As of yet, the MSM hasn’t understood the real scandal instead, focusing on “front-running client orders” and “manipulating the physical fix.”  The true issue, of course, is the 24/7 suppression that has enabled a fiat Ponzi scheme to destroy the global economy to the benefit of the “1%” at the expense of the rest.  In due time, this “chink” will become a gaping hole as the disparity between physical supply and demand, and the fraudulent paper veneer becomes too large to bridge.

Speaking of physical fundamentals, I need to bring up one of the largest “pink elephants in the room” i.e., the accelerating decline in gold and silver supply, with essentially zero chance of reversing.  We have discussed this topic ad nauseum – as in that “other” reason to own precious metals and the rise and fall of South African mining – and provided ample evidence to support our conclusions, as below. 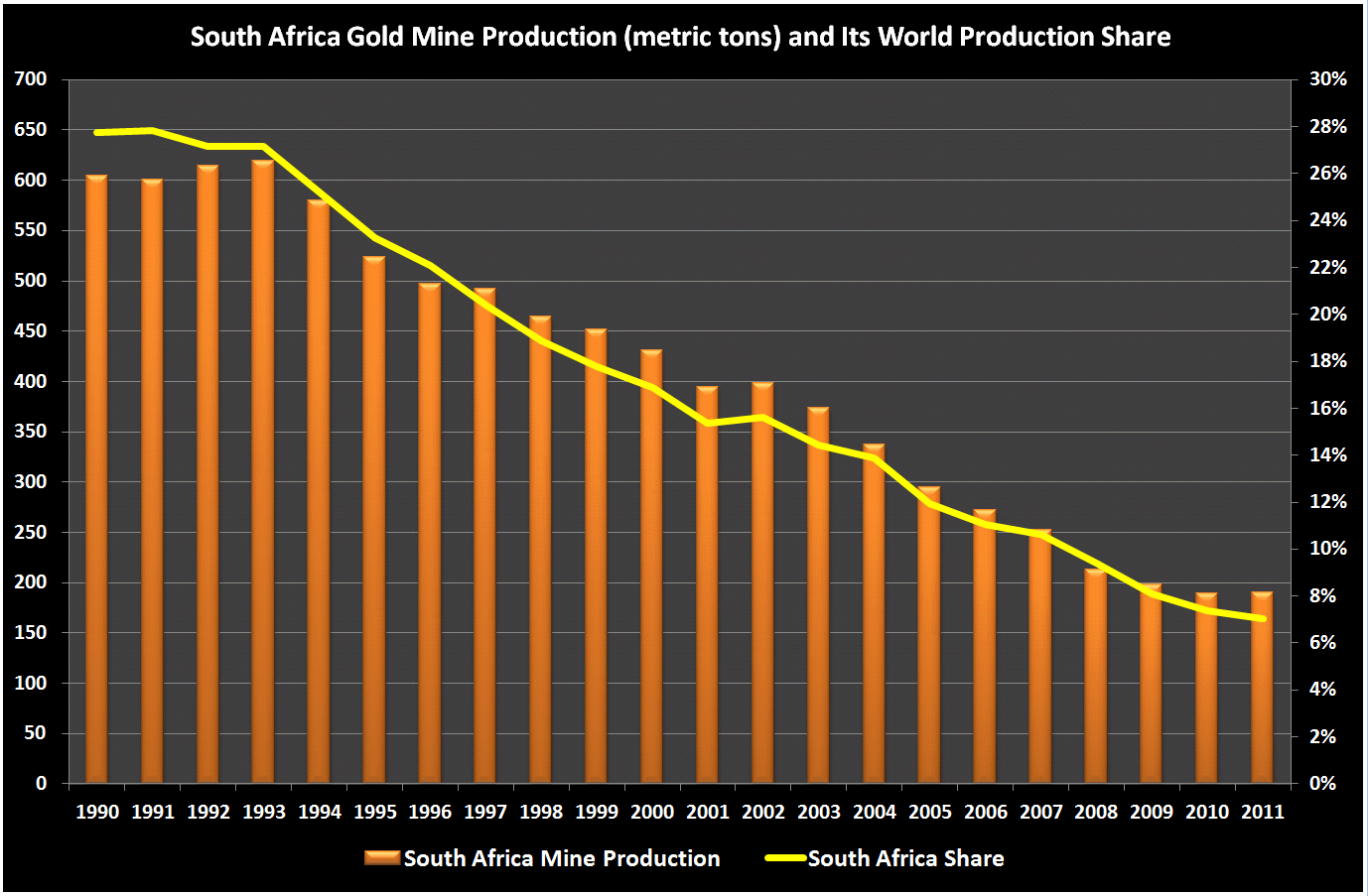 To that end, major news emerged earlier this week further supporting our assertion of “peak cheap gold”; and thus, solidifying the floor under prices irrespective of Cartel manipulation.  And that is, America’s largest shale oil deposit had its recoverable reserve calculation reduced by an astounding 96% providing a crushing blow to the U.S. energy industry.  Long time readers know I spent ten years as a Wall Street Energy analyst and thus, have seen countless new technologies touted as the “big one” that would save America – from ethanol, to tar sands, to the Austin Chalk formation.  As I wrote last year in unending energy independence hype there is just as much chance that shale oil fizzles out as becoming the “big one” and in just a year’s time, a combination of significant reserve downgrades and accelerated depletion profiles are starting to tip the scales toward the former.

Perhaps that’s why oil prices have barely budged from multi-year highs, despite the aforementioned global economic weakness.  Well, that and a veritable blizzard of money printing combined with inexorable population growth which for all intents and purposes has gone parabolic.  The end of China’s one child policy will only exacerbate this issue; and given that energy prices comprise roughly 20% of mining costs, the cost of producing gold and silver will likely rise indefinitely – perhaps, in dramatic fashion.

Such inflation is all encompassing and for “the 99%,” gold mining costs are far from a pressing issue.  However, most people don’t realize just how much energy prices play into day to day costs – from food, to medical services, to just about everything we “need versus want.”  Last week, for instance, I wrote of how paper prices at Staples have nearly doubled in the past few months and when I asked the salesperson why, his response was rising fuel costs have dramatically increased the cost of transporting it.  Consequently, companies are doing everything in their power to cut costs like Hewlett-Packard announcing 16,000 job cuts or IBM cutting retirees from its health insurance plan, and in some cases, unethically – like Walmart reducing employee hours enough to push them below the full-time benchmark or consumer goods producers “shrinking” portions to deceive buyers.

Such trends only increase the burden of government to socialize society, yielding higher taxes, reduced productive output, and increased money printing – that must be monetized to enable the financing of related deficits.  In turn, the money printing catalyzes higher consumer prices yielding an endless loop that cannot be reversed.  As one particularly sharp analyst recently espoused, “The problem with Keynesian stimulus is that you need to do ever more of it, and make it ever bigger, in an effort to outrun the unintended consequences.”

Sadly, as the worldwide fiat Ponzi scheme has matured corporations and governments alike have attempted to whitewash such issues with fraudulent data and statistics.  FASB’s 2009 decision to allow banks to value toxic debt at par is a perfect example; as is the newest manipulative trend of governments upwardly revising GDP calculations to “create” lower debt/GDP ratios.  None are more blatant than what the beleaguered Italian government announced yesterday, however as going forward it intends to include prostitution and illegal drug sales in GDP calculations.  In time, all such schemes are uncovered for what they are particularly when cash flow is wanting i.e., emperors with no clothes.  Just ask Deutsche Bank which is scrambling to raise capital to avoid insolvency.

When speaking of such “chinks,” the widening disparity between the “1%” and the rest cannot be underestimated.  Clearly, there’s a reason why social unrest is breaking out worldwide – from nations as disparate as Turkey, Brazil, Thailand, and the Ukraine.  Surging food prices are obviously the most significant issue; but one cannot underestimate the discontent caused by hyper-inflationary monetary policies that benefit bankers and no one else.  To wit, the war on savers has left millions with no means to fund retirement – much less pay for day to day expenses.  In fact, the ECB may well institute negative interest rates next month; which again, will be fantastic for bankers but not so much everyone else.  And here in the States, free ZIRP money has enabled bankers to make a killing on the distressed properties foreclosed over the past five years; while simultaneously, driving up rental prices to all-time highs as the “rent to buy” investment scheme depressed homeownership rates to multi-decade lows.

Not that one needs to own a home but when rental prices skyrocket in a moribund economy featuring surging inflation and student loan debts among other things the recipe for social disaster becomes that much more potent.  To wit, much of Southern Europe is experiencing 50%+ youth unemployment; and at the pace the aforementioned trends are heading such rates are likely to become the rule rather than the exception the in coming years.  As a rule, the masses become increasingly unsettled when the rich get richer and the poor poorer and at no time in recent memory has this ugly trend been more evident.

As noted above, “Economic Mother Nature” will not be denied – no matter how many deceptive tactics are attempted.  Thus, physical gold and silver fundamentals will continue to strengthen, global “de-dollarization” will accelerate, and the “1%” will find it harder and harder to maintain such an advantage.

Richard Russell is dead on in inadvertently employing “Occam’s Razor” to describe why such efforts are enacted; which inevitably, will see the “chinks in their armor” broken wide open.  And thus, while enjoying your holiday weekend, we hope you give a moment of thought to these far-reaching topics as one day soon your financial survival just may depend on them!

We have been fed lies about the US economy for months on end. We’ve listened to lies about inflation; we’ve been told lies about our “healthy economy.” As far as I’m concerned, manipulation of the markets is tantamount to lying. Manipulating the markets (as per QE) is forcing the markets to behave in an unnatural way, thereby destroying the normal action of free markets and thwarting the forces of supply and demand. And I ask myself, what’s behind these endless lies?

It’s always a matter of money, position, and power. Thousands of men and women depend for their livelihood on employment at the Federal Reserve. They live in fear of losing their jobs. So naturally, one of their objectives is to preserve or endure their jobs. This means keeping the Fed alive at all costs.