It’s Tuesday morning, and before I get to today’s certain to be “controversial” topic – which may, in the process, be further delayed by a Greek Parliamentary vote, Whirlybird Janet’s Humphrey-Hawkins hearing, or any number of black, grey, or white swan news – let’s start with the insanity that is the “silver market.”

With Europe on the verge of collapse (Happy Anniversary Mario – three years ago next week, you promised to do “whatever it takes” to save the Euro); the Chinese market amidst a NASDAQ-like freefall – notwithstanding unprecedented government intervention; sovereign nations like Greece and Puerto Rico defaulting on billions of loans – with many others “on deck” for the same – exposing the unprecedented insolvency of the global financial system; QE on steroids throughout much of the “civilized” world (way to go Shinzo, here’s what “Abenomics” has wrought on Japan); Central bankers gone mad – from Europe to England to China; imploding currencies; collapsing commodities (with yesterday’s Iranian “peace” deal likely to pressure the world’s most important commodity for years to come); abysmal economic data, such as plunging U.S. retail sales, small business sentiment, export prices, and industrial production this week alone; declining interest rates despite Whirlybird Janet supposedly ready to tighten monetary policy (LOL); and oh yeah, a Greek “deal” that may not even be ratified (is anyone watching National Bank of Greece’s stock?); the U.S. Mint last week announced it sold out of Silver Eagles – for, I believe, the third time in the past three years.

And yet, amidst an environment when so-called “commercials” like JP Morgan have been dramatically covering silver short positions (if you believe a word of the fraudulent COMEX data), we’re to believe that despite surging physical premiums, expanding delivery times, and the aforementioned litany of wildly Precious Metals bullish news, that not only would paper silver NOT increase, but dramatically underperform essentially all other commodities. Yes, lead has since risen 7%; whilst silver is down 1% – having been “waterfall declined” as soon as the COMEX opened, with not a shred of “news” to explain it, for the third straight day. 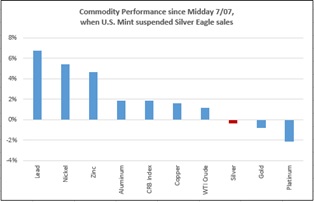 Actually, if you want to hear what today’s PM plunge is being “attributed” to, get ready for the “theater of the absurd.” Yes, despite yesterday’s collapsing import and export price data; this morning’s abysmal mortgage application and industrial production data; the CRB index nearing its all-time low; and oil prices down 13% in the past two weeks alone (you know,
after the June PPI was calculated); we’re told Precious Metal prices suddenly plunged this morning – just after the COMEX open, of course – because said June PPI was 0.2% above “

expectations,” entirely due to “rising energy costs!” Of course, if it was 0.2% below expectations, they’d attack PMs as well, under the guise of “deflation.” That said, interest rates don’t appear as “fearful” of the inflation the PPI supposedly purported – as not only are they lower since its publication, but despite Janet Yellen appearing 15 minutes from now on Capitol Hill, potentially to speak of potential “rate hikes!” And as for stocks, as you might expect, they haven’t budged all morning, care of the omnipresent PPT. 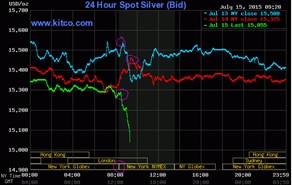 In fact, as you can see below, the only other time Miles Franklin has experienced stronger sales (essentially all silver, by the way) since I came aboard four years ago was in May 2013, following the April 2013 Cartel paper raid that also yielded physical shortages. And before that, the Fall of 2008; when again,silver shortages resulted from a major Cartel paper raid –
also due to TPTB’s fear of PM safe haven flows amidst a significant financial crisis. 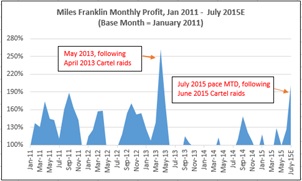 Frankly, it’s getting to be a giant joke already. Regarding “financial markets,” what more is there to say? Now that Central banks are overtly manipulating them – with the Banks of Japan, China, and Switzerland now doing so in stocks as well as bonds – which sadly, is just the “tip of the iceberg” – what’s the point of even pretending they are freely-traded? Heck, even Rick Santelli of
CNBC said so himself yesterday.

As for the so-called “media” reporting on the political, economic, and social carnage we are amidst – as well as the “financial markets” that once upon a time “discounted” such factors – the idiocy, lunacy, and conflict of interest is beyond madness. I mean, when WTI crude prices “magically” rose from $51.00 to $53.50/bbl upon yesterday’s hideously bearish news that an Iranian “peace” deal was agreed upon – which according to the everything I’ve read, was unexpected – Yahoo! Finance claimed oil prices rose because the agreement will not commence for another six months! First of all, these talks have been ongoing for weeks – if not months – with oil prices rising for most of this time surging global production and inventories, amidst plunging economic data. Moreover, throughout the entire negotiating process, it was widely known that it would take six months for the related oil sanctions to be lifted. And finally, the last time I picked up my finance textbooks, financial markets were “discounting mechanisms” of anticipated events six months hence. In other words, one would have to be a moron to not suspect something awry; or conversely, disingenuine, conflicted, or otherwise compromised.

Which brings me to today’s topic, of whether or not there are one or more “conspiracies” to commandeer markets; establish a “new world order”; or otherwise “control the world.” Long time readers know my view on this topic well; i.e, disdaining any and all discussion of such potentialities in lieu of Occam ‘s razor, which tells us the simplest explanation of such political, economic, and financial markets lunacy is the most likely. Which is, that care of the very nature of fiat currency regimes, a handful of people at the top of each countries’ political and financial “food chains” have inadvertently inherited massive amounts of power. And care of human nature – which first and foremost, values survival; and second, profit; all imaginable attempts to “kick the (Ponzi scheme) can” down the road are attempted. In the process, all out carnage is wrought upon the world’s political, economic, financial, and social structures – inviting all manner of “conspiracy theories” as to whose “fault” it is; and who “plotted” such carnage.

In my view, one is best served to stick to the available facts; many of which, unequivocally, prove manipulation of financial markets (do you believe freely-traded silver markets would have declined this week?); economic data (do you believe the Chinese economy grew 6.8% last quarter?); and a host of other factors. And as for “conspiracies” – such as, for instance, “one banks”; “new world orders”; and “currency resets”; and their supposed “leaders” – from the Rothschilds to the Bilderbergs, George Soros and the Trilateral Commission; the odds that a handful of “elites” not only have the ability to control billions of people (speaking thousands of languages, in hundreds of countries), but the desire to do so are not just zero, but less than zero.

Why do I bring this up today, you ask? I’ll tell you why. Because now, more than ever, the “alternative world” needs to unite in its efforts to spread truth, as opposed to speculations, hypotheses, and innuendo. Not that the Miles Franklin Blog is trying to “save the world” – or even change it one bit, for that matter. However, David Schectman and I, as well as the vast majority of our readers, very passionately believe in the power of the internet to communicate truth, in a world gone mad.

For four years now, we have watched paper gold and silver prices attacked despite the most violently bullish fundamental factors imaginable – from the explosion in worldwide debt, fiat currency, and geopolitical instability; to record gold and silver demand; collapsing inventories; and the near certain onset of peak production, given the ongoing collapse of the global mining industry. We have also seen interest rates, the world round, lowered to zero or below by maniacal Central banks, taking the “final currency war” nuclear with unprecedented ZIRP, NIRP, and QE schemes – with no end in sight (LOL, as I write, the Bank of Canada dramatically reduced its 2015 GDP estimates, and unexpectedly reduced interest rates out of sheer panic). And we have seen the complete and utter betrayal of trust by our politicians; corporate leaders; and of course, Central bankers – you know, those trusted to maintain the purchasing power of our savings.

In other words, the time is NOW to focus our efforts on the truth; which throughout thousands of years of history, has set man free – and for that matter, differentiated it from all other species. The more we do so, the more rapidly the shackles that enslave us will be broken. And for those interested in protecting themselves from the mathematically certain calamity said “can-kicking” exercises have exposed us to, we suggest you take a good, hard look at the facts of gold and silver supply, demand, and inventory. As in 2000, 2008, and the onset of all other historical crises, the vast majority will only recognize such truths after the fact. Which is why you, our readers, are blessed with the knowledge of what is occurring – and what will be – beforehand.

P.S. Whirlybird Janet’s Humphrey-Hawkins prepared comments were a decided yawner, purporting the same “we’ll raise rates if all goes as hoped” claptrap we’ve heard for the past two-plus years. You know, since the aforementioned April 2013 Precious Metal raid noted above; which, according to the MSM, was due to expectations of economic “recovery” and Fed “rate hikes.”