Credit Crunch All Over Again!

It smells like crunch time to me, the markets have flattened or begun to even roll over on continuously decreasing volume.  The economy has also turned down all over the world including in China.  Europe is contracting, Britain has finally figured out their finances are FUBAR and the U.S. would not show growth if not for the biggest inventory build in history.  Oil tankers are sitting idle (and full) all over the world, is this a sign of “recovery” or of stagnation.  The Baltic Dry index is plumbing news, this would be a sign of what?  When I wrote crunch time above, I should have clarified, it looks “credit” crunch time and this time there is no white knight to save the day.

Zerohedge penned an article Monday where even Citigroup talks about this lack of liquidity.  After years of massive deficit spending and quantitative easing amongst the major central banks of the world …liquidity is drying up! 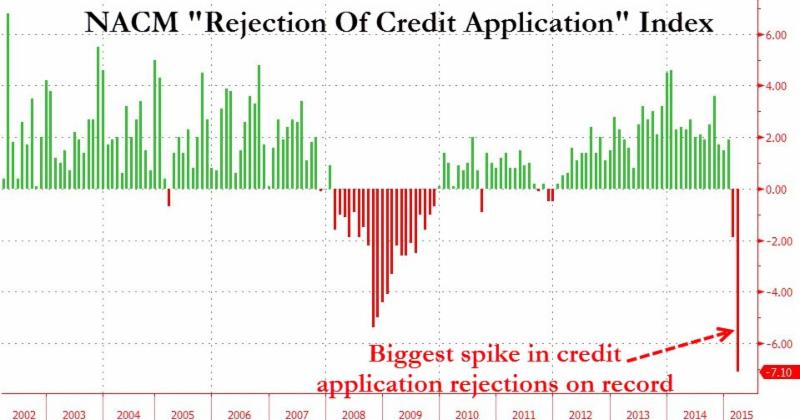 Credit requests are being turned down at a record pace.  This is just one aspect of liquidity being withdrawn but look at the “speed” that it is happening, and the depth or magnitude compared 2008.  In an effort to reflate, again, sub prime loans are being packaged and gobbled up.  “Government Using Subprime Mortgages To Pump Housing Recovery – Taxpayers Will Pay Again”.    Not because they are rated “AAA”, no, this time because they provide “yield”…ANY yield.  It doesn’t matter whether they default or not …they “yield” something now, right now!  The obvious question then becomes “what bullets are left” by the Fed to reverse the collapse this time around?

The real and short answer is “none”.  The above chart is just one of the real economy, the real problem is if a chart could be constructed of “derivatives losses”.  This one would be a doozy and the reaction would be an immediate and global panic.  We won’t be able to see a real time chart until after the fact, we can’t see behind the curtain because that would create a panic on its own.  I know I have written about this aspect before, the “truth” must be hidden at all costs, it is important because it is the last line of the defense of “confidence”.  Greek bonds, even though default is imminent CANNOT in any way be marked to true value.  Ratings services are already hinting at and devising ways to not recognize nonpayment by Greece as something other than a default.  In what world is nonpayment not a default?  Would your bank believe YOU if you didn’t pay …and then said “don’t worry, I didn’t default”?

I showed you a chart yesterday of Chinese shipping container activity, this was followed by the largest trade deficit ever by the U.S..  NOT because we are importing more but because our exports are drying up.  A sure sign the strong dollar is beginning to bite and trade overall is slowing.  The expansion of the trade deficit guarantees a negative 1st Quarter GDP even after bogus pie in the sky reporting.  As Zerohedge put out yesterday “QE4 is coming”.  I say QE4 will absolutely tank confidence because we have already taken more than “three strikes”!  Confidence by the way has been the very last vestige and has been used, re used and overused, QE4 will expose this.

Please understand the connections I am making here, it is not just the real economy nor just the financial markets, it is both …and at the same time.  This is 2008 all over again except much larger, far reaching and more severe.  The markets are far larger than the central banks collectively, call this Dr. Frankenstein and his monster if you will.  The real economy is no longer generating enough cash flow to service the debt hung around its neck … while the financial sector hangs on by the thread of “non” mark to market.

The truth cannot come out and no, truth will not just hurt us.  On the contrary, the truth will outright kill the system(s) as we knew them.  Do not fool yourself, do not “hope” I am wrong.  Get yourself into a financial bunker lined with gold and “lose” as little as possible when the system comes down because most of what is not inside your bunker and outside of the system will be “re appropriated” shortly.  No one and no central bank will, nor has the ability to come to your rescue this time around!  Best described, it will be every man for himself.