In yesterday’s RANT  – “GOLD STANDARD…OR FREE GOLD” – I wrote of how I disagreed with half of Ambrose Pritchard-Evans’ big-picture views, as espoused in the below article…

“Europe and America will not allow deflation to take root”

…but NONE more so than the following; of how ‘poor little banks’ are victims of a simple business cycle – unfairly restrained when they should be unleashed…

You will not solve the global economic problem by cracking down on banks. I’m sorry; the opposite is the case right now. One of the reasons we are not recovering from this slow motion depression is because banks are being forced to boost their capital ratios. The EU regulations are forcing them to put aside more and more capital –and these amounts are going up and up and up. This means they have to shrink lending, sell assets, and de-leverage. I’m all in favour of doing that, but you do it during a boom, not a bust. You should be counter cyclical, not pro cyclical. This is a fundamental error.

They should have been doing this in 2005-2007, in what’s called in central banking “leaning against the wind”. So as credit growth gets out of control, you should step in and fighting it. You throw everything you’ve got at it.  Singapore, Hong Kong and others have been very good at this. What they’ve learned to do with their property markets is cut the loan to value ratio on mortgages – it goes to eighty percent; then to seventy percent, sixty percent, fifty percent, etc., until you basically can’t borrow anymore to get a mortgage because they simply shut it down. You can do these things, but these sorts of controls are for booms. When you’re in a bust, you do the opposite: you loosen up, you actually make it easier for banks. What they are doing right now is classic: closing the stable door after the horse has bolted, it’s too late.

Perhaps he doesn’t realize these “victims” – together with their subordinates at the Federal Reserve – have been the most significant factor behind ALL major economic crashes of the past century; particularly those in 1929, 2000, and 2008.

That is; it was their fraudulent actions – like lobbying to repeal Glass-Steagall; collecting taxpayer-funded bailouts via the intimidation of ex-Goldman Sachs CEO Hank Paulson; shoddy lending practices; reckless proprietary trading – often against client recommendations; and the “financial engineering” that produced market-destroying derivatives; that turned a “normal business cycle” into a global calamity – which CANNOT be fixed.

Moreover, such “constraints” are, for starters, a JOKE.  Does Pritchard mean the so-called “Basel III” capital adequacy ratios – created by Wall Street’s own Central bank, the “Bank of International Settlements”?  That is, the “regulations” that not only were just “delayed” until the end of 2013…

Meanwhile, the Fed has been pumping trillions of “liquidity” (i.e., PRINTED MONEY) into the banking system; practically BEGGING Wall Street to lend it out.  But lo and behold, the largely insolvent banks – care of trillions of overvalued mortgage assets and underwater derivatives – won’t do it; instead, recycling such FREE funds (care of “ZIRP”) to the Fed for the FREE profits generated in the “carry trade”; which, in turn, artificially suppresses interest rates, accelerating the capital destruction process… The above chart clearly depicts a banking system amidst a MAJOR cash flow crunch.  However, care of the now infamous 2009 FASB rule changes that allow banks to “mark to fantasy” their inventory of toxic assets (doesn’t sound “restraining” to me)…

…as well as the insider information TBTF banks are privy to with their unethical, illegal HFT algorithms…

…these CRIMINALS report “profits”; so much so, that 88% of this year’s S&P 500 earnings will be generated by just ten companies; Apple, IBM, General Electric (which also has a HUGE financial/derivatives arm), Western Digital; and seven TBTF banks – including some of the most vile, corrupt, insolvent names on EARTH…. 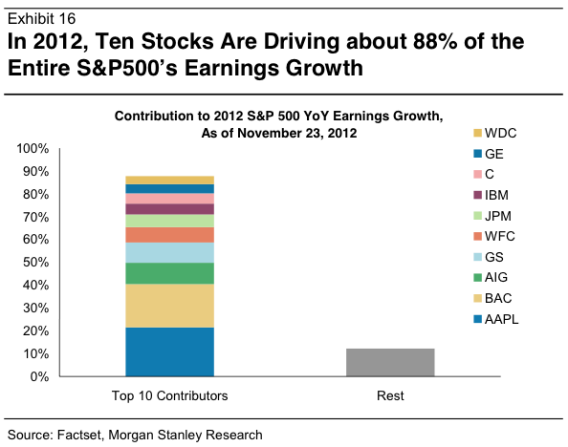 Yes, after world-beating Apple – which actually produces something – America’s most “profitable” companies; amidst a MASSIVE recession, ALL-TIME HIGH loan delinquencies, and MULTI-DECADE LOWS in real estate prices, are…

IBM – which also produces something; and

…although clearly their recent actions don’t belie such strength…

…and consequently, while the ENTIRE WORLD suffers from the CRIMES these disgusting, government-partnered filth perpetrated…

Audit of the Federal Reserve Reveals $16 Trillion in Secret Bailouts

…they still get to run roughshod over the corpses they’ve created; in the President’s cabinet…

List of Goldman Sachs employees in the White House

ECB Head Forced To Defend His Goldman “Conflicts Of Interest”

Chuck Schumer To CTRL-P “Get To Work Mr. Chairman”… For The Benefit Of My Donors

Bonuses on Wall St. Expected to Edge Up

So, to “Ambrose Pritchard-Evans;” I suggest you pull your high-fallutin nose out of textbooks – and bankers’ cumulative arse; and see the world for what it is – “D–N THE BANKS!”