It’s Friday morning and frankly, it’s hard to believe the financial world is still standing.  Prior to the past five years’ all-out, U.S.-government led efforts to “suspend disbelief” with unprecedented, 24/7 application of a blanket money printing, market manipulation and propaganda campaign, this week’s events would have caused plunging financial markets and expanding, global fear.  However, in today’s Bizarro world – which like the 1960s London Gold Pool, won’t last forever – the Italian stock market hits multi-year highs when its government collapses for the second time in five months and its largest city – Rome – heads for a Detroit-style bankruptcy filing!

As we discussed earlier this week, “Draghi’s Reckoning Day” is coming; perhaps, as soon as Thursday’s ECB meeting, when “Goldman Mario” will likely admit that not only is Europe’s “recovery” in jeopardy, but in dire need of the ECB’s printing presses.  As expected, the Euro Zone reported comically low “annual inflation” of 0.8% this morning; as apparently, soaring food and energy prices are not considered inflation in Europe – as is the case here in the States, per the “core CPI” favored by the Fed.  Under such circumstances, it’s a fait accompli that if the ECB doesn’t lower its benchmark rate from 0.25% to 0.00% on Thursday, it most certainly will shortly thereafter.  Moreover, it’s only a matter of time before it introduces negative deposit rates, overt QE – via its OMT, or Outright Monetary Transaction scheme, and/or other similar “extraordinary measures.  Countless ECB officials have hinted as much in recent months; which we assure you, wasn’t done by accident!

Amazingly, the Euro continues to rise against the dollar – depicting just how poor the dollar’s fundamentals are.  In fact, the dollar has this morning fallen below the key psychological level of 80 to 79.77 as I write.  In and of itself, a sub-80 dollar index doesn’t mean much – particularly as the Exchange Stabilization Fund has in the past demonstrated its virtually unlimited mandate to protect that level, at any cost.  However, given that the dollar has risen against essentially every currency since commencing Operation Twist, QE3 and QE4 in late 2011 – by exporting cancerous inflation the world round – it’s quite remarkable that it can’t rise against the rapidly dying Euro.  By the way, atop this morning’s “deflationary” European CPI report, it was also reported that Euro Zone unemployment held within 0.1% of its record level in January.  And yet, with the prospect of Draghi easing policy further next week, the Euro is still rising sharply against the dollar! Moving eastward, let’s go back to what we wrote in yesterday’s “Chinese Financial Torture” – of how the PBOC is quite obviously weakening the Yuan and doing so in dramatic fashion.  In that article, we wrote of how it’s 1% decline this week against the dollar was the largest since the dollar/Yuan peg was put in place 20 years ago – and that was before today’s additional Yuan decline.  We also discussed the enormous amount of derivatives linked to this exchange rate, triggering massive bank losses each time the Yuan even slightly declines.  The supposed “danger zone” – where such losses accelerate – is apparently 6.15 to 6.20 Yuan to the dollar; and this morning, the Yuan declined from 6.12 to 6.15, putting it right on the cusp of this zone.

Next week, major financial meetings will occur within China’s government; and if their consensus on the Chinese economy is more dovish, don’t be surprised if PBOC policy is decidedly more “aggressive” in the coming months.  As Bill Holter wrote this morning, “On Any Given Day” the Chinese has the financial might to destroy the world; and whether purposefully or not, they are ultimately destined to do so, knowing full well they will arise from the ashes as the 21st century’s undisputed superpower.  The fact that 2013 Chinese gold imports doubled the previous record level – set in 2012 – should tell you exactly how to prepare for this inevitability; and by ignoring such warnings, you are exposing yourself to the equally inevitable hyperinflation that will accompany the dollar’s demise as the “world’s reserve currency.”

Speaking of dying currencies, how about the Yen?  Ironically, as the BOJ doubles Japan’s money supply in a two year period – thus, seeking to massively devalue it – the Yen refuses to materially fall against the dollar again because no matter how weak Japan’s fundamentals are, they cannot usurp the dollar’s bleak outlook.  In fact, the BOJ’s own “stabilization fund” has been as vehement about preventing the Yen from falling below 102/dollar as the Cartel has been in preventing gold from rising above its current $1,330/oz. “line in the sand.”  Frankly, how and why the PPT has latched upon the 102/dollar exchange rate as its “launching pad” for the “Dow Jones Propaganda Average” is beyond me; but needless to say, we have seen “dead ringer” U.S. stock ramps every day this week – in nearly every case, with a 100% correlation to the dollar/yen exchange rate.  Huh????

As for the dollar, whose “deadly demographics” are the focus of today’s article, it didn’t take “Whirlybird Janet” long to hint at “pausing” the Fed’s supposed tapering strategy.  While continuing to utilize the latest propaganda red herring of “bad weather” – which we recently refuted, in spades, in “mother nature has had enough” – Yellen made it crystal clear that indeed, the Fed is as “data dependent” as ever.  And thus, her statement that “if there’s a significant change in the (economic) outlook, certainly we would be open to reconsidering (tapering).”  Better yet, under the category of the most comical statements ever made by a Central banker, Janet Yellen said:

There is no need to bring down the size of our portfolio to tighten monetary policy. We have a range of tools that we can use to raise the level of short-term interest rates at the time the Committee deems appropriate.

So let me get this straight.  The world’s largest hedge fund –the Fed – holds $4.4 trillion of overvalued U.S. Treasuries and mortgage bonds in its portfolio; which, “tapering” and all, is increasing at the rate of $65 billion per month.  According to Yellen’s statement, the Fed will eventually raise interest rates – thus, torpedoing the value of this portfolio – without simultaneously selling anything?  Honestly, the best analogy I could give is if the Miles Franklin Blog, instead of speaking of why one should buy Precious Metals, turned tail and started aggressively writing of why one should sell.  In other words, destroying not only our firm, but our personal net worth’s.  Amazingly, is ignored by Wall Street and the MSM; but in time – when rates inevitably do rise – you can be sure they’ll be right on top of it! Speaking of “data dependency,” does anyone remember January 30th; i.e., when the BEA, or Bureau of Economic Analysis, reported a ridiculous 4Q 2013 GDP growth rate of 3.2%?  I won’t even go into the comical accounting here – much less, the dislocation of such a number with all semblance of reality.  However, suffice to say, Wall Street and the MSM gushed of how the so-called recovery was gaining momentum.  In fact, in typical Cartel fashion, gold and silver were instantaneously attacked by 2.2% and 2.9%, respectively, to nearly their lowest levels since mid-2010 – i.e., before the Fed’s QE3, the ECB’s LTRO and OMT and the BOJ’s “Abenomics” were launched.

Remember, Janet Yellen took office as Fed Chairman just two days later; and since then, has unwaveringly spoke of how the “recovery” continues – even after the following week’s miserable NFP report, and four additional weeks of beyond miserable, across-the-board economic weakness.  Well, here we are on February 28th, and already this “amazing” GDP number was revised dramatically lower, from 3.2% to a still ridiculous 2.4%.  Let’s just ignore the comical 1.6% GDP “deflator”; as just as is the case in Europe, food and energy prices are not considered inflation; nor are Obamacare taxes and fees, for that matter – which are starting to appear on restaurant checks nationwide!

Sure, the PPT is gunning the Dow again on such “good news”; and of course, defending gold’s $1,330/oz. “line in the sand” on today’s COMEX “first notice day.”  In fact, per what we recently wrote of in “Gold Manipulation Going Mainstream,” Bloomberg published a shocking article this morning of how gold has been manipulated for a decade at the 10:00 AM EST; i.e., “key attack time #1.”  Perhaps they have finally seen this damning chart from Dmitri Speck, of what has occurred since 1998 when the world’s physical markets close at this time – as was the case…today. But I digress, as such futile manipulations will ultimately end up in the dustbin of historical failure, given their attempt to stop far larger, more powerful forces; as the fact remains that there never was, and never will be, a “recovery” as the global fiat Ponzi scheme reaches its cancerous, terminal phase.  No currency has ever survived such financial suicide and none will fall further this time than the dollar – in turn, yielding history’s most violent Precious Metals surge – given that U.S. borrowing capacity has been massively overinflated by the dollar’s unwarranted, seven decade privilege as the “world’s reserve currency.”  Which leads me to today’s primary topic; i.e., the “deadly demographics” working to further undermine the dollar’s influence.

We have long referenced the “demographic hell” that dooms Japan, in that it has the world’s second oldest population and second lowest birth rate; in both cases, behind only Monaco, which sports a population of just 37,000.  America is “middle of the pack” on both counts; but ominously, is aging more rapidly rate than at any time in its history.  With the first wave of baby boomers reaching their 70s; a massive wave of “60-somethings” right behind them; and thanks to a soaring cost of living, the lowest birth rate in the nation’s history, the percentage of senior citizens is set to double in the next 20 years, per the below chart. 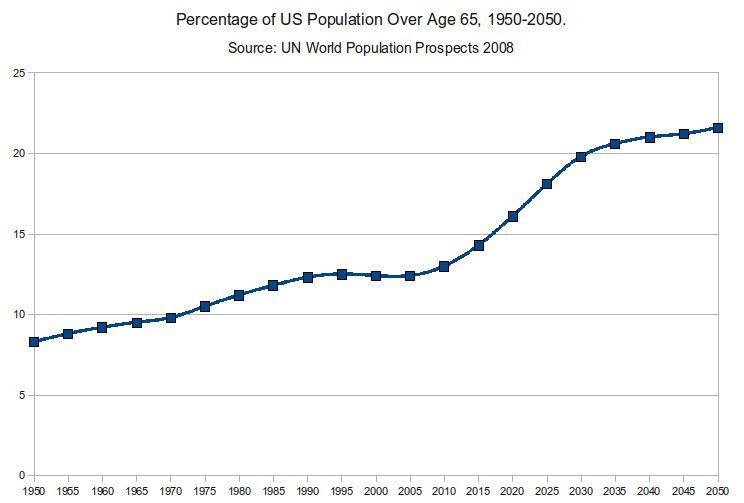 Worse yet, the vast majority have little or no savings – per this terrifying article by the great Michael Snyder; explaining why so many are competing for the handful of remaining jobs with the young.  Moreover, this scary graph depicts just how bad the U.S. Labor situation has become; simultaneously, proving how such “deadly demographics” are manifesting themselves on the economy.

As aging of the U.S. population accelerates in the coming decades, along with public spending – and taxation – related to Obamacare, Medicare, Social Security and other social programs geared toward the aged, America’s finances will continue to deteriorate, on both the public and private levels; in turn, yielding exploding budget deficits, national debt and ultimately – QE notwithstanding – catastrophic interest rate increases.

And thus, all we can say is this.  Anyone not considering such factors when planning their financial futures is taking the equivalent of a giant leap into a bottomless abyss.  There is simply no way the dollar’s purchasing power can go anywhere but down over the long-term; while conversely, the “path of least resistance” for Precious Metals is decidedly up.