It’s Monday afternoon, just after the U.S. market close. I’m traveling to Vancouver tomorrow morning for the Sprott/Stansberry symposium; and aside from logistics, I’d like to spend a little time with the family beforehand – particularly as Sylvie appears to have gotten some type of summer flu. That said, enough horrifying economic and market events have occurred since penning “the only difference between now and late 2008” this morning to write a miniature book, so it’s not like you’ll be short-changed with this commentary.

Between said article and this one, I taped my weekly podcast with Kerry Lutz, titled “this is it.” Which frankly, couldn’t be more appropriate; as to answer the question posed in Saturday’s Audioblog – “has the ‘big one’ commenced?” – never have I felt more confident. Does this mean “TPTB” won’t do everything in their manipulative power to kick the can as far possible? Of course not, as I’m sure I don’t have to tell you. That said, it has become so obvious “the wall” has been reached, it’s difficult to believe everyone won’t realize this before long. And by “before long,” it’s hard to believe history’s largest house of cards will stand through year-end, in my view. And no, this is not a short-term “prediction” of anything – like stock, bond, or gold prices; but instead, a dire warning of things to come, potentially far sooner than most can imagine.

As for today’s “action,” it started with the second biggest decline in Chinese equity history; at 8.5%, just shy of the previous record of 8.8% – from February 27th, 2007, as the previous PBOC-fostered Chinese stock bubble was commencing a 71% crash within a mere 12 months’ time. Of course, the fact that 1,500 stocks were halted intraday means that, in all likelihood, China would have experienced a 1987-like crash if not for government intervention. Which, as we all know well, has been in full force since the Shanghai Exchange peaked two months ago, 20% above today’s levels – and will certainly be in full force tomorrow, according to the previously conspicuous, but now headline-seeking CSRC, or China Securities Regulation Commission. I mean, they did such a job preventing the 2007 and 2015 bubbles from starting – and ending well, that what could possibly go wrong?

“China will continue stabilizing the market, and sentiment, to prevent risks,” the CSRC says. “Malicious sellers will be dealt with severely.”

“Malicious sellers?” You mean like the ones that long ago marked gold and silver mining shares for death? Or at the least, deemed them to be nothing more than Cartel “signals” of impending gold and silver raids – at the expense of not only tens of thousands of mining jobs and tens of billions of sovereign revenues; but the entire worldwide monetary system? Not that I care anymore, having “paid my dues” in the mining industry from 2006-2011, watching not a single executive stand up for shareholders – or, for that matter, in the ensuing four years. Conversely, now that I work in the bullion industry, and invest solely in physical gold and silver, the “mining Armageddon” 15 years of paper suppression has caused will only make my product – and life’s savings – more valuable.

To that end, following last week’s “Sunday Night Paper Massacre II” – in which paper gold was taken down by $52/oz in roughly one minute’s time – I opined that the ensuing mining collapse – yielding the “biggest supply reaction in commodity history” – was officially “set in stone.” And watching the Cartel attack mining shares as they did today – when their paper gold and silver raids largely failed – I couldn’t be surer of not only “peak gold” and silver, but the imminent shortages that will prevent hundreds of thousands of people from protecting themselves from the upcoming, inevitable, global hyperinflation.

Recall, it was just Friday when we learned that Anglogold Ashanti, the world’s third largest gold miner, lost $3 billion in the first six months of 2015 (before July’s historic Cartel raid), and is consequently laying off 53,000 employees, or 35% of its worldwide work force. This afternoon, this horrifying reality was really driven home by Cartel naked shorting; taking AngloGold’s stock down another 6.2%, as well as the stocks of nearly all its peers – such as the world’s largest gold miner (and top bankruptcy candidate), Barrick Gold, which plunged by nearly 5% itself.

Of course, the reason for such paper attacks on the hapless miners was, for the second straight day, because “Cartel Rule #1” was in danger of being breached; i.e., “thou shalt not allow PMs to surge, whilst the Dow plunges.” On Friday, the Dow’s decline was stopped cold at the time-tested “PPT limit down” level of 1.0%; and sure enough, in true “dead ringer algorithm” fashion, the Dow bottomed as soon as the NYSE opened – EXACTLY 1.0% below Friday’s close. And this, whilst China was down 8.5% and Europe 2.5%; not to mention, as the CRB Commodity Index plunged anew, to within a half percent of its 2008 spike bottom low.

In fact, most of the CRB’s damage was done late in the day, demonstrating just how comically obvious today’s manipulations were (i.e., the “only difference between now and late 2008”) – with both crude oil and “Dr. Copper,” among others, closing at the day’s lows. As did interest rates, just two days from Wednesday’s FOMC policy statement; which, if the combined efforts of the Fed, PPT, ESF, and gold Cartel are not successful in the coming 48 hours, Whirlybird Janet may not only give up the ghost regarding hints of potential rate hikes, but speak openly of the consideration of incremental “easing measures.” Which, of course, would be like a hunter shooting blanks at a raging Grizzly Bear, as the entire world is starting to realize the only “weapon” remaining in the Central banking “arsenal” is hyperinflation. Which, based on 1,000 years of monetary history, is guaranteed to be launched – likely, sooner rather than later.

“Deflation” notwithstanding, the cost of living continues to rise for the world’s “99%,” with each dollar, yen, Euro, and Yuan printed. That said, the cost of living has little to do with commodity prices – which are plunging as rapidly as expenses like insurance, rent, and healthcare are surging, causing an equally horrific catastrophe for global corporations, municipalities, and sovereignties. And just as the nature of fiat currency Ponzi schemes is its necessity to continue expanding – and thus, diminishing worldwide purchasing power; the nature of today’s historic commodity oversupply will be to destroy all commodity providers and vendors, as well as countless tens of trillions of soon-to-be-worthless financing, starting with high cost providers like U.S. shale oil.

Again, I cannot emphasize enough just how dire the below chart is; as frankly, the only way it won’t break through 40-year support in the coming 6-12 months – if not sooner – will be the aforementioned, overt hyperinflation of “reserve currencies” like the dollar. And by the way, the only times the CRB Index approached the 200 level in the past 20+ years were at the bottom of the 2008-09 financial crisis; the month after 9/11; and the “perfect storm” oil collapse of early 1999, which took WTI crude to $9/bbl amidst an otherwise soaring global economy – which I know of exceedingly well, having been a Wall Street oilfield service analyst at the time. Sadly, this time around, commodity prices have plunged without the “scapegoat” of a singular political or economic event, demonstrating how supply/demand fundamentals alone are the cause; and begging the question of just how scary things will get when such “black swans” inevitably arrive. Perhaps, ironically, said “swan” may well be Greece; where, “bailout or not, the situation gets uglier with each passing day. 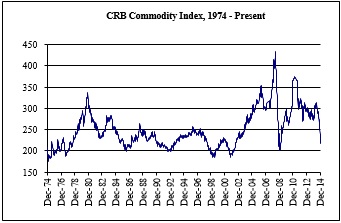 Here in the United States of Manipulation, the realization that the biggest equity bubble of all time is imploding is spreading like the Ebola virus; particularly as quantifiably, this is one of the weakest breadth, weakest volume rallies of all time. And conversely, the rapidly exploding gap between physical and paper gold and silver fundamentals is becoming a major topic of discussion; what, with the GLD ETF having now been drained of 50% of its “inventory” since the 2008 crisis – and the COMEX, nearly 90% of its “registered inventory”; whilst at the Shanghai Exchange, more gold was delivered in the past two weeks than in the entirety of 2014 at the COMEX. And don’t forget the U.S. Mint, which not only is on pace for one of its largest ever sales months for
gold Eagles – but upon re-opening its silver Eagle sales operations this morning, sold an incredible 1.3 million ounces today alone!

In a nutshell, the walls are rapidly closing around history’s largest fiat Ponzi scheme, from every angle imaginable. In many parts of the world, “game over” has already arrived; and in those where it hasn’t – such as said United States of Manipulation – it appears to be right around the corner. To that end, aside from protecting your wealth with Precious Metals – hopefully, purchased from and/or stored with Miles Franklin – we sincerely hope you have spent the last few years of slow motion train wreck preparing for what’s coming; encompassing not only your wealth, but all aspects of your life. Frankly, I have never been more terrified; and hopefully, you too live by the mantra of “preparing for the worst, but hoping for the best.”