A few weeks back I thought about writing an article on “honest weights and measures” and why they are important.  There has been so much news recently, I almost forgot it as a topic.  A funny thing happened since then.  Last week while in church during the sermon, the pastor quoted from the Bible, Proverbs 20-10.  This verse states “differing weight and differing measures, the Lord detests them both”.  I thought this was quite a coincidence, my thinking of the topic and then being reminded of it in church.

The CIA of course says “there are no coincidences” but I assure you there are, or a much higher power at work here.  You see, I began reading the Bible a few months back and just so happened to be reading “Proverbs” currently.  I didn’t know where this quote regarding weights and measures was in the Bible so I called our pastor and asked him.  Lo and behold, it was on the very next page where I had last left off reading!

In ancient times, false weights and measures (stealing) was done in several manners.  Coins could have their edges either shaved or clipped.  They could also have lesser valued metal than gold or silver “mixed in” and no one would be the wiser until Archimedes discovered the “weight to volume” relationship.  Then along came “fractional reserve” banking where a bank would hold only 10% (or not!) of the gold to back notes or currencies they had written.

Of course now in modern day, “money” really hasn’t anything to do with weights or measures.  “Money” is printed (mostly digitally) in any amounts that central banks choose.  Millions, billions, trillions, and then these amounts are levered even further …and further again …it doesn’t matter!  Well, this is not true, it DOES matter, just not yet.  There is a saying, “a fair day’s wage for a man’s work”.  In today’s world this is no longer so from several vantage points.  First, back in the day of “Leave it to Beaver”, Ward could go to work and provide comfortably for his family of four.  This is not so today, both Ward AND June have to work, and in many cases this is still not enough to provide comfort.

The second vantage point is from that of “settlement”.  A worker bee shows up to work for the week and then is paid in dollars, euros, pounds, yen or even yuan.  None of these are actual settlement, they are all “liabilities” of the issuer and only considered an asset by the holder because he can trade it to someone else.  All of these currencies have value because they are “accepted as payment”, what value would (will) they have if they are not accepted?  Of what value do these notes or digits have on their own other than their “acceptance”?  Is there any cost whatsoever to their creation?  Ask yourself the most basic of questions, if something is “free” to create in any quantity, what then is its “value”?

“Manmade” money (fiat) has created the problems we have today and now after many years is coming to a head.  The ONLY way for a fiat currency, or in the current case a fiat world to continue is to have inflation.  If inflation were to cease or worse, deflation takes hold, then it is “system over” as in game over.  The world has reached a point of debt saturation where more debt cannot be taken on and any new debt actually takes away from an already declining system.  “Good inflation” (markets going up) is about to end, you can clearly see this as VOLUME is and has been drying up over the last 12 months.  You can also see this in the real economy.  The U.S. has been through the biggest inventory build in history while China’s trade seems to be going into a freeze mode. 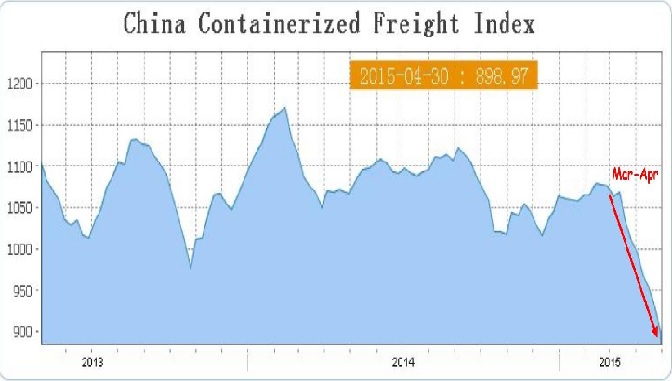 This chart is particularly scary because China has been the economic engine pulling the world along since the financial crisis.  A 20% drop in trade in just one quarter is ominous!

I mention China above because it is my belief they will ultimately inherit the financial throne. The Chinese have been voraciously accumulating gold because they realized the West’s “weights and measures” were becoming criminally out of control.  I believe China will at some point (when there is no more gold for them to accumulate) will revalue their currency the yuan versus gold.  This will be the heart of your reset and China will become the new arbiter of global weights and measures.  My guess is that the yuan will have an honest relationship to gold for at least 25-50 years until they begin to face the same problems the U.S. did after the Bretton Woods agreement.

Before, during, or immediately after China announces their holdings or revalues their yuan to gold, the “paper” in the West will burn.  We will see the “everything is worth nothing” moment and those who stored their labor in paper balances will be ruined.  I will leave you with this thought, would you do business with or deposit your hard earned savings with a bank, broker or insurance company that refused to allow an audit?  What if this institution has refused to an allow an audit for each of the last 60 years?  How much confidence would this “bank” have left?  It is for THIS very reason the Chinese have been “running” the gold bank, “trust” is about the only thing left in Fort Knox!