According to the MSM, yesterday’s equity plunge was due to the Russians considering counter-sanctions against the West.  I mean, how pathetic can the propaganda get – as if such actions, if indeed taken would “surprise” anyone?  Alternatively, any financial professional would look at charts like this one – depicting dramatically higher valuations then even the 2000 mania peak – and run for the hills, no matter what the Russians were doing.  To boot, amidst the weakest global economic backdrop and most dangerous geopolitical environment, in decades.

Then you have the propagandized “meme” for PMs getting smashed; i.e., the Fed will start raising rates, whilst the rest of the world will do the opposite.  Even if this were true – which it is decidedly NOT – PM buying from the 6.7 billion people living in the “rest of the world” where monetary policy is easing (and currencies crashing) would surely swamp the supposed PM selling from the 0.3 billion Americans; which, by the way, is decidedly not seen here at Miles Franklin, one of the nation’s largest bullions dealers.  And by the way, has anyone noticed that the blatant pre-FOMC goosing of the all-important ten-year Treasury yield decidedly failed to breach the 2.6% “line in the sand” we wrote of four months ago?  It’s back down to 2.5% today; and with the global recession expanding, the relentless call for “QE to Infinity” will only grow louder.

Moreover, the prospect of U.S. rates being slightly higher than zero, with real inflation rates anywhere from 5% to 10% doesn’t exactly make me fearful of a dollar surge against gold and silver, particularly when they’re trading well below their respective costs of production.  However, the thing that befuddles us most of said “meme” is that the U.S. government has put itself in a massive “duration trap” by refinancing nearly all its debt to the short end of the yield curve.  By doing so, it actually pays less interest today than when the financial crisis hit in 2008 when the national debt was $8 trillion lower.

In other words, the budget deficit is hypersensitive to even the slightest increase in rates, which is why the Fed must keep them at zero.  And don’t forget the record debt levels of municipalities, corporations and individuals as well, facing equally dire financial risk.  No, my friends.  PMs are down for one reason and one reason only.  TPTB are so terrified,” they have gone off the deep end naked shorting the “Achilles Heel of the Financial World” in their desperate effort to “kick the can” that last mile.  It starts every Sunday when the ultra-thin “Globex” paper trading platform opens – in fact, on every Sunday for the past 66 weeks; and gains momentum at the 2:15 AM EST open of the London paper “pre-market” session – over the past 18 months, 90% of the time – right into the New York CRIMEX fraud pit.

Accompanying such blatant market manipulation – and money printing – is as noted above, some of the most pathetic propaganda ever produced.  Economic data reporting is not just biased by the need to purport “recovery,” but flat out fabricated on the government “island of lies.”  Moreover, whatever is not blatantly misreported is so poorly understood it makes me ashamed to have aspired to be a financial analyst.

To that end, we have been writing the past year of the quicksand foundation of the recent “housing recovery,” as well as the “pink elephant” in the room – that it’s OVER.  That is for all but the “1%” markets where the Fed’s free money have funneled, care of TARP, ZIRP, QE and countless other methods of transferring what’s left of the nation’s wealth to the handful of sociopathic bankers that destroyed it. 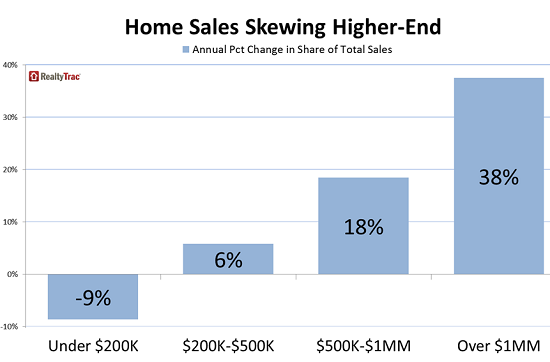 Earlier this week, we were told that new home sales rocketed 18% in August, despite not a shred of real world data validating it.  All one needs to do is read this damning article from Wolf Richter to realize what a sham such data is – from its ±20% margin of error to the fact that despite such “growth,” housing inventories surged to their highs of the year.  The only way such an “anomaly” – of surging sales and inventories – could occur is if home building activity were literally exploding.  And given that lumber prices are down 25% from the housing bubble peak of Spring 2013, mortgage purchase applications are at 14-year lows and housing permits barely above 50+ year lows, it’s difficult to figure how such strong data could even be imagined, let alone reported. Putting the “nail in the coffin” of the supposed housing recovery, Richter presents the most damning chart of all – depicting the plunging annualized property sales rate.  Since Spring 2013, when I wrote of the obvious end of the real estate surge here in Denver, the annual pace of U.S. home sales has plunged from 5.5 million to 4.5 million; and judging by the increasingly negative bars at the chart’s right, the prognosis doesn’t appear good – particularly with the ENTIRE WORLD clearly experiencing dramatic economic deceleration. 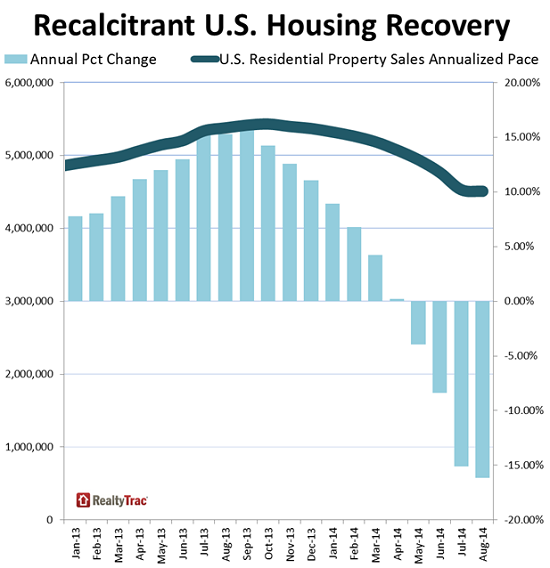 In such a desperate economic environment, precious metals have thrived for thousands of years; and thanks to history’s most vicious suppression scheme, paper prices have been pushed so low, so unmercifully, that sentiment has fallen to nearly all-time lows (see John Hathaway’s comments below), yielding prices too low to even support mining industry survival.

The Ned Davis research index of gold sentiment is the lowest it’s been in 30 years.  Their sentiment chart right now is basically at zero.  When that index is below 35, and of course it’s at zero right now, the average level of gains on trades is about 17 percent.

The other thing worth mentioning is that Mark Hulbert’s gold sentiment index is now at the second-lowest level ever.  Hulbert said, ‘There has only been one time in the last 30 years when the HGNSI got any lower than it is today.  That came in June 2013 when it fell to minus 56.  Today it’s at minus 46.9.’  A couple of weeks after the June 2013 reading, a rally began that by the end of August had tacked on more than $200 to the price of gold.