If Gerald’s Right, Are You Ready?

With a slew of increasingly ugly “horrible headlines” to discuss – from the 2008-like plunge in commodity prices; to global economic collapse, and yesterday’s putrid NFP employment report, the last thing I expected to start with was a “market forecast.”  Generally speaking, I avoid discussions of financial asset valuations and movements, given how violently, blatantly manipulated they have become.  However, when one of the industry’s true “good, smart guys” – who like the Miles Franklin Blog, is not a “financial adviser” per se – makes such a bold prediction, I take notice.  Whether or not he turns out to be right, I guess we’ll know soon; and if he’s not, it matters not, as what he speaks of must inevitably happen, even if it’s not as imminent as he claims.  After all, “the only difference between late 2008 and today” are the aforementioned, hideously manipulated financial markets, which governments spend limitless amounts of printed currency units to “influence.”  And thus, with no further ado, I present yesterday’s devastating, near-term forecast of “Gerald Celente, Patriot.”

“Rarely do I ever put a date on market crashes.  I did it in 1987 when I forecast the 1987 stock market crash — in the Wall Street Journal.  I also forecast the ‘Panic of 2008’; and the ‘dot-com bust’ in October of 1999, when I said the dot-com mania would fail in the second quarter of 2000.  And now, I’m predicting a global stock market crash before the end of this year.  And it’s not only going to be the Dow, but the DAX, the FTSE, the CAC, Shanghai, and the Nikkei.  There’s going to be panic on the streets from Wall Street to Shanghai, and from the UK down to Brazil.  You are going to see one market after another begin to collapse.”

Again, we have no idea if he’ll be right; although in some ways, he already is – as in China; where, despite unprecedented government support, the Shanghai stock exchange has plunged 28% in the past two months.  However, the fact remains that, no matter how one measures it, the case for global capital destruction has never been stronger.  Not in 1987, 2000, or 2008.  Or heck, 1929 for that matter.  Unquestionably, the root cause is bad money, as history’s largest, most destructive fiat Ponzi scheme passes through its terminal, cancerous phase – yielding unprecedented global debt, industrial capacity, and market bubbles.  In other words, the “Great Deformation” of all things financial – which sadly, has not only lethally poisoned the global economic landscape for years to come; but fostered the most dangerous geopolitical and social landscape in generations.  Here at the Miles Franklin Blog, our “advice” all along has simply been to “prepare for the worst, and hope for the best”; and in our view, the probability of the “worst-case scenario” occurring has never been higher – potentially, taking the form of Gerald Celente’s near-term prediction.

As for the reasons for such an outcome, let me count the ways.  For one, cascading global financial defaults are inevitable – with last month’s Greek, and last week’s Puerto Rican, default events being just, in Bill Murphy’s words, “jacks for starters.”  With global economic activity, objectively speaking, at its singular low point in generations – as exemplified by the CRB Commodity Index crashing through 2008 spike bottom lows this week; an historically over-indebted world – whether referring to the individual, corporate, institutional, municipal, or sovereign sectors – will unquestionably, spectacularly implode.  Such as, for example, the world’s highest cost oil producers; like the U.S. shale oil industry, financed by an unfathomable $500 billion of collapsing junk bonds and leveraged loans.

Given the global nature of today’s financial markets, when “one goes, they all go” – particularly when so many are leveraged to the same, hideous, hopeless trends.  To wit, crude oil’s catastrophic collapse alone – WTI closed yesterday at $43.75/bbl, and Brent Crude $48.61/bbl – is enough to destroy countless governments, corporations, and currencies.  However, when one considers that essentially all commodities are crashing – and with them, the flimsy, historically overvalued financial instruments supporting them – it’s difficult to make the case that even “the powers that be’s” most potent market manipulation tools will be able to avert the inevitable much longer; perhaps even by year-end, per Gerald Celente’s prediction.  Which is why it’s so comical that anyone is even considering a September “rate hike”; or, for that matter, any Fed action other than the inevitable, and perhaps imminent “Yellen Reversal” – when Whirlybird Janet launches QE4, and perhaps takes interest rates negative.  I mean geez, this week alone, we saw the BLS’s “double seasonal adjustments” reduce reported U.S. GDP “growth” for the past three years to an historically low post-war “recovery” rate of just 2.0% per annum.  Moreover, after horrific 1Q and 2Q growth readings of 0.6% and (a likely to be downwardly adjusted) 2.3%, respectively, the Fed’s own “tracking model” predicts 3Q growth of just 1.0%!  And this, before yesterday’s horrifying July NFP employment report – which, despite meeting “expectations” of 215,000 “jobs” and a 5.3% “unemployment rate,” was, as always, hideously ugly once one looked at the internals.

To wit, last month’s all-time low wage growth reading was validated; whilst the Labor Participation Rate didn’t budge from last month’s 38 year low – or, for that matter, the all-time low for males only.  And thus, whilst 215,000 “jobs” were supposedly created – nearly all of them, part-time – 144,000 people left the labor market entirely, bringing the total number of working age Americans not even looking for work to a record 93.8 million, causing the labor “slack” Janet Yellen so fears to expand further.  Furthermore, 83,000 of said 215,000 jobs were fabricated by the BLS’s “birth/death model” – which not only has the Miles Franklin Blog discredited for years, but was Friday’s “top story” on Yahoo! Finance’s website!  Throw in the continuation of the same hideous secular trends that have sentenced America to employment purgatory for years to come – like all new jobs being in the 55+ age category; and nearly all new jobs in part-time, minimum wage paying “gigs” like waiting and bartending; and you can see why even the consideration of a near-term rate hike is downright ridiculous – at least, until hyperinflation inevitably consumes the dollar.

Not to mention, as interest rates freefall in real-time, in a monetary policy environment the Fed vehemently claims to be “data dependent.”  To wit, following yesterday’s NFP and commodity carnage, the benchmark 10-year Treasury yield plunged to within three basis points of its 200 day moving average of 2.14%.  If, or better put, when, it inevitably breaks below 2.14%, you can bet your “bottom dollar” that all talk of Fed “rate hikes” – as has been the case for the past seven years – will decidedly “die on the vine,” to be seamlessly replaced by forecasts of when QE4 might be launched.

As for Precious Metals, the gaping chasm between paper and physical markets continues to widen – as worldwide demand objectively remains at record levels, whilst paper manipulation has reached levels of blatancy unmatched in the “New York Gold Pool’s” long, sordid history.  To wit, following Thursday’s blatant “Cartel Herald” capping at the time honored 12:00 PM EST “cap of last resort”; a “carbon copy capping” at the “2:15 AM” EST open of the London paper markets – for the 488th time in the past 557 trading days; and of course, the post-NFP capping at exactly 12:00 PM EST yesterday, the Cartel has now repelled gold from crossing the “line in the sand” it drew on July 19th’s “Sunday Night Paper Gold Massacre” an incredible 39 times.   In fact, in its desperate attempt to prevent the inevitable global stampede into real money, the Cartel has inadvertently caused paper gold prices to close lower for seven straight weeks – i.e., the first time since the bull market commenced in 1999!

Gee, I wonder how much longer that historically manipulative trend can continue – particularly now that, for the first time in 14 years, JP Morgan and the other Cartel “henchman” are on the verge of going net long. 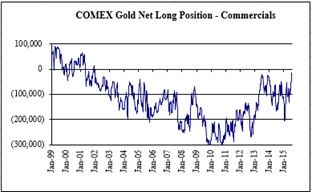 Frankly, silver’s paper/physical chasm is putting even gold’s to shame; with global supply utterly vanishing, whilst the Cartel maniacally defends – yesterday, for the eighth time since July 19th – the key round number of $15/ounce.  Moreover, like gold, said “commercials” continue to inch closer and closer toward going “net long.”

Back to today’s principal topic…given the inevitability of the collapse of history’s largest, most destructive fiat currency Ponzi scheme, the only remaining questions are when and how.  Unfortunately, no one has a crystal ball.  However, as “Economic Mother Nature” has never been defeated, the odds that the most egregious bubbles in history last much longer are getting slimmer with each passing day.

As David Stockman put it Thursday, an “epochal deflation” is heading right for us like a speeding train with no brakes.  And if Gerald Celente is even close to right about his prediction about the “end game” playing out by year-end, the urgency to PROTECT YOURSELF from what’s coming has never been more powerful.  And given that the historical anomaly of unduly “cheap insurance” – in the form of historically suppressed gold and silver prices – remains available during such turbulent times, at prices way below the cost of production, the urgency to act NOW could not be stronger.

And if you do, as always, we simply ask you to give Miles Franklin the chance to earn your business, by calling us at 800-822-8080; and asking our team of Precious Metals experts – on average, sporting 22 years of industry experience – for a free consultation.