Nary an Intellect Stirring

I’m writing this Christmas morning, at 5:00 AM; and I thought I’d get a few things off my chest.  Given the utter torture chamber TPTB have made 2013 into, I’m looking forward to the calendar turning.  But then again, sometimes one must be careful what they wish for.  After all, the Fed has not only created an equity bubble rivaling that of the late 1990s; but via unprecedented money creation, has done the same thing in markets ranging from bonds to real estate, to art, diamonds, and even Bitcoins. 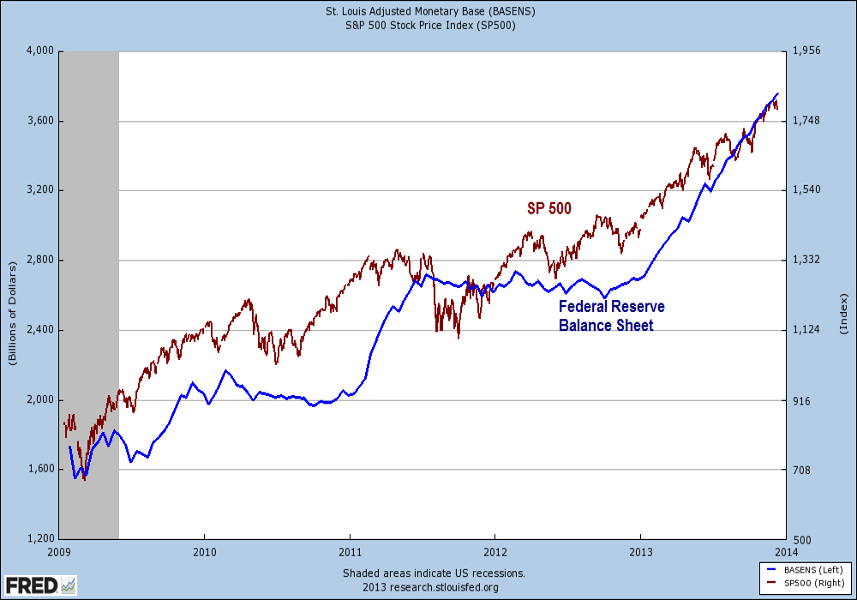 Despite the Fed’s “deflation” propaganda, U.S. gasoline prices have never been higher in late December than today; while just last week, both beef and chicken prices hit new all-time highs.  Obamacare is set to increase health insurance policies by 50%+ in 2014 and beyond; not to mention, yield widespread job layoffs, as employers desperately attempt to offset onerous healthcare mandates.  And with another 1.3 million people set to leave the labor force this weekend – as their unemployment benefits expire; the “war against poverty wages” rages on, given the nation’s largest growing “employment segment” is the minimum wage, part-time category.  This is why U.S. entitlement spending is going parabolic; and why it was reported Monday that the savings rate plunged to multi-year lows last month, below 4%.  Charts such as these demonstrate just how weak the REAL U.S. economy actually is; and again, even we are in awe of the high-pitched “recovery” propaganda amidst easily, the worst holiday retail season since the post-2008 financial crisis.

Meanwhile, as miniscule rate increases (in the context of long-term averages) have caused new mortgage applications to plunge to 13-year lows, housing affordability has never been lower.  The Fed’s free money, coupled with venture capital from its Wall Street partners in crime, have created a real estate bubble that – despite showing early signs of rolling over – still remains at nose bleed levels.  In 2014, a tsunami of home equity rate resets will commence, from ill-advised loans made at the mid-2000s bubble peak; and thus, without further, MASSIVE Fed stimulus, another 2008 is unquestionably around the corner.  Hence, what Peter Schiff deems Fed “Open Mouth Operations” will likely fail in short order; as in our view, “QE5” is far more likely than actual “tapering.”  Last week, we proved tapering is but a mirage to start with; and next year, our guess is the rest of the world will realize this, too.

Source: Zero Hedge
In fact, the entire world is irreversibly addicted to ultra-low interest rates; and thus, it won’t be long before the battle that was a seeming Fed victory last week will become an all-out loss in the war to stave off reality.  The Chinese repo rate surges noted below are but a symptom of this disease, and now that the all-important U.S. 10-year Treasury yield is on the verge of achieving multi-year highs above 3%, it won’t be long before a potentially cataclysmic impact will be felt across the world’s four corners.

Source: Zero Hedge
Remember, global economic activity is in far worse shape than even the bogus, manipulated American situation; and thus, any negative factor experienced here will unquestionably be more virulent there.  Already, we are seeing currencies of the so-called “Fragile Five” nations collapsing anew; and with major elections upcoming in India and Europe during 2014, it’s entirely possible that the “next 2008” is right around the corner; only this time, Central banks no longer have the same “monetary ammo” to counter it with.  Quietly, Standard & Poor’s stripped the European Union of its ill-deserved triple-A rating last week; while simultaneously, Italy’s President warned of the strong possibility of a violent, widespread public insurrection in the coming months, as weak economies and surging inflation become impossible to ignore.  But why listen to facts such as this, when it’s much easier to focus on rising stock markets – benefiting no more than 1% of the population – care of hyper-inflating Central banks?  We still rank the PIIGS – or PIFIGS, if one rightly includes France – as very high on the list of “crisis catalysts”; and frankly, Greece and Spain still top our list of “potential black swans.”

And speaking of crisis catalysts, there’s always the ever-widening gap between paper and physical PM prices.  As COMEX registered gold inventory has plunged 85% to just 463,000 ounces – with the possibility of another 300,000+ ounces being withdrawn when the December contract closes in six days – Indian premiums have surged to an all-time high above 25%.  Per an article from LibertyBlitzkrieg.com, Indian gold smuggling is going parabolic; in what, in time, will likely be viewed as the most suicidal government policy in Indian history.

However, said “gold rush” is not just occurring in India, but EVERYWHERE.  Even the U.S. Mint set a record for silver Eagle sales this year; and in fact, closed last week for two weeks – in what can only be described as the year’s second silver shortage.

In China, just the published amount of gold imports will end the year at more than double 2012’s record level; and while the COMEX reveals – in spades – that it is purely a speculative, manipulated, Cartel PAPER tool, the Shanghai Exchange is rapidly rising to prominence as the world’s leading PHYSICAL market.  In our view, it won’t be long before “price discovery” is nearly entirely made in China; and frankly, 2014 may well signal its coming out party.  Can you imagine waking up each day to NOT the typical 2:15 AM smashes, but inexorably higher prices?  Well get used to the thought, as it’s no doubt coming.

Source: InGoldWeTrust.ch
As an article from Zero Hedge notes, “gold fever” – or better put, fiat currency fears – are spreading like wildfire; and following this week’s BOMBSHELL news that the Bundesbank has only repatriated 37 of the 700 tonnes of gold demanded a year ago from the Fed and the Bank of France, such realization of the utter emptiness of Western vaults may well go “viral” a lot sooner than anticipated.  Yes, record physical demand has been offset this year by unprecedented naked shorting; yielding gold and silver prices well below the cost of production, and thus, the likelihood of massive supply shortages in the coming years.  Not to mention, record low Western precious metal sentiment; which we assure you, can’t last much longer.

We hope you enjoy your holidays to the fullest; but at the same time, gird up for the likely horrific ramifications of the hyperinflationary, global monster the Fed, BOJ, ECB, and other major central banks have created.  “Rome is burning” – perhaps, literally – and for this likely brief, historic moment, nary an intellect appears to be stirring.