We are again entering a collapse phase similar, yet far worse than we had in 2007-2008.  I will show you a few graphs as illustration of weakness in the real economy and compare them to the financial bubbles we are living.  The point to writing this piece is simple, the Fed has been saying they will raise rates.  They truly need to in order to retain ANY credibility at all …just one minor problem, they cannot!  Not only can the Fed not raise rates, it is my opinion the economy and in particular the markets will force them to embark in another “QE folly” shortly.  I believe this will be the final shot of QE administered and may be seen by historians as “QE 4(n)evermore”.

You have seen this first chart before but to refresh your memory: 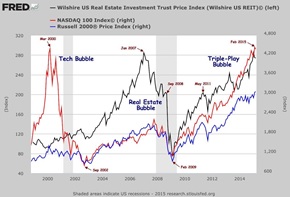 This illustrates three of our current bubbles, the following graph breaks down

the home ownership percentage in the U.S. versus the amount of debt supporting home ownership.  The takeaway here is fewer Americans own homes yet those who do are carrying more debt than ever before.  Though not exactly the same, this is quite similar to an American public where stock ownership is less broad than in the past, volume has declined drastically and margin debt is at an all time high 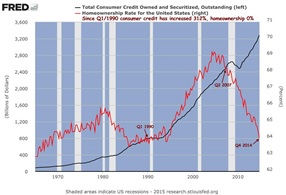 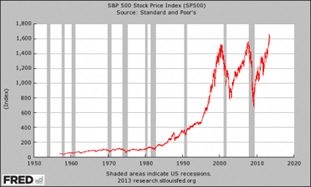 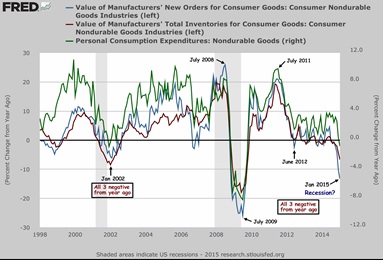 Add to the above, some very bad employment numbers and even the Fed’s own forecast growth for Q1 is now only .2%.  Keep in mind, the Fed is using ridiculous inflation numbers well under 2%, if they were using the real number between 5-7%, they would be operating with a growth rate assumption of negative 3-5% or worse!

Normally try not to “chart you to death” but I have just one more.  The whole purpose of this exercise is to show you how the timing of each “QE” of the past fit in to the economic and financial picture.  QE was used to flood the system with liquidity each time the markets began to weaken or revolt.  QE was not so much timed with the real economy, it has EACH time been more about the markets themselves.  The following chart illustrates the action in the markets preceding, during and after each QE dosage. 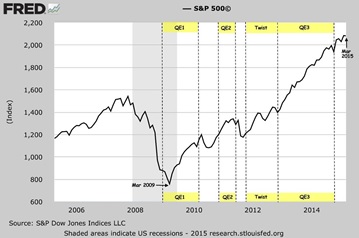 You will notice QE was introduced each time the market was weak, also notice that once QE was ended, the markets would again weaken and be followed by another round of QE.  I believe we are again close to another inflection point.  Stocks have not made new highs for several months, should they begin to weaken from here (they have every reason to), another dose of QE will be announced.  The talk has been all about Fed tightening or raising rates, this is an absolute MUST for the Fed to regain any credibility.  They cannot ever do this, they will be forced to do the opposite.

Should the stock markets pull back and even approach a 10% correction, the Fed will be forced into QE4.  Please understand why.  Each episode of QE created more debt and more derivatives making the markets that much more levered with thinner margins of error.  The “problems” that QE were originally introduced for in the first place have only been made more severe with each new episode.  QE was never really about the economy at all, it was always about the banks and financial systems not imploding in a daisy chain collapse of the debt and derivatives.  Once the markets sniff out a 10% pullback, QE will again be mandatory to try to reflate the system and push the ultimate ending into the future …kicking the can again so to speak.

I believe the next QE will be the last one in our lifetimes for several reasons.  The Fed will finally lose ALL credibility.  Add to this, globally central banks and treasuries have destroyed their own balance sheets in their efforts to defy deflation.  They can no longer be the solution as they are part, a very BIG PART of the problem.  QE has distorted so many various markets so far from levels Mother Nature would endorse, something will snap in an out of control fashion …and QE has been all about “control” and not allowing markets to truly function and “set” prices.

What I am saying is this, the grand experiment of QE is very shortly going to be  “forced” into use again.  I believe this will be a spectacular failure and one which history will remember for 1,000 years!  My term for this last round is “QE4(n)evermore”.  I say this because the monetary system will be broken, trust will be broken.  The world began an experiment of global fiat money back in 1971, this will finally be proven to be the folly it has always been …and everyone on the planet (including Americans) will fully understand it.

Any new currency which is introduced will by necessity have to have some sort of real backing to have “confidence”, without confidence any new currency will fail.  History has shown us time and time again that the only currencies which retain trust or confidence have some sort of tie to gold and silver …or gold and silver themselves.  No currency backed by gold or silver has ever failed …unless man himself fiddled and cheated with the weights, measures or the actual holdings of the metals themselves.  Quantitative easing is the ultimate in  “fiddling and cheating” …and this with currencies of no real value to begin with!  In the most simple of terms, “It’s all been a scam”!