It’s Wednesday morning, and I’m going to mix it up a bit with a slightly different format.  Frankly, I’m feeling a bit overwhelmed with the explosive list of “horrible headlines” – each of which, in a freely-traded market, would have caused Precious Metal prices to soar.  And thus, instead of focusing on one, I’m going to list them all, in no particular order.  This way, our point will be made as powerfully as usual; as if this much ugly news can occur in 24 hours – absent a significant “crisis,” no less – just think what it will look like as history’s largest fiat Ponzi scheme really starts to collapse.  Which we assure you, it will; just as it did for the previous 599 fiat currency regimes – none of which comes close to the size, breadth, and destructive power of today’s.  Which not only is the first to encompass the entire world, but has fostered the largest, most toxic, parabolically expanding debt edifice – by many multiples – of all-time.

With that terrifying introduction, we now present, in no particular order, Satan’s (financial and economic) laundry list – of which the only thing we can guarantee is will get dramatically longer, uglier, and more malodorous until the entire House of Cards monetary system it draws its power from implodes.

1. Following no less than a dozen “Greek deal” rumors – no doubt, leaked by PPT minions to make sure the “Dow Jones Propaganda Average” remains above 18,000 (as if its historic, PPT-generated nosebleed valuations aren’t assuming the “best case scenario” already) – it is all but assured Greece will miss Friday’s measly €303 million interest payment to the IMF; let alone, €1.3 billion owed over the next two weeks. In other words, the “Grexit” we guaranteed two months ago – not to mention, two years ago, is all but assured. It is incomprehensible to ponder just how enormous, and far-reaching, the resulting cascade of global debt and derivative defaults could be – as this inevitability becomes decidedly imminent. Not to mention, the global political response – as billions of impoverished, and angry, citizens run headlong into a far more devastating crisis than 2008.

2. The commodity collapse we first warned of last Fall is accelerating – with even a desperate “oil PPT” starting to lose its war with the historically “undefeated” Economic Mother Nature. Two weeks of “unexpected” inventory builds, and an OPEC meeting Friday that will likely shut the door on any hope of production cuts – let alone, as U.S., Russian, and Iraqi production hit record highs, with the prospect of a million barrels per day of Iranian oil hitting the market later this year – will make it all but impossible to support oil prices with artificial paper buying; barring hyperinflation and/or war, of course.

3. To that end, the parallel “copper PPT” is being routed, pushing the CRB Index within 7% of its 2015 – and 2008 crisis – lows. And care of the unprecedented oversupply created by decades of Central-bank fostered mal-investment – which we wrote of in detail five months ago; not to mention, the weakest economic environment – and outlook – of our lifetimes; the odds of a deflationary abyss couldn’t be higher. Which, contrary to relentless propaganda, could not be more bullish for Precious Metals – particularly when considering the money printing tsunami that will be unleashed, atop a global monetary system already collapsing under the weight of five decades of unfettered debt and inflation creation.

4. The “sum of all fears” is occurring in the global debt markets – ironically, as “Goldman Mario” Draghi speaks of the need to maintain ECB “NIRP” and “QE” to Infinity, amidst an historically weak European economy. As we discussed in last month’s “tectonic market shifts portend disaster,” global interest rates have been relentlessly rising for weeks, despite unabashedly disastrous global economic data. Perhaps it is being led by the Chinese selling of U.S. Treasuries we recently learned of. However, this terrifying trend is far too pervasive too be explained so linearly – particularly in Europe, where rates have exploded despite not only the commencement of a massive, €1.2 trillion QE program in March, but its impromptu expansion – by nearly 10% – just two months later, under the laughable guise of “seasonal liquidity issues.” To wit, yesterday and today have been the two worst days for the German bond market since the 1998 global bond market crash – as the benchmark 10-year bund yield has quadrupled since QE commenced! And by the way, yesterday was also one of the biggest one day plunges for the dollar – not the Euro, but the dollar – in years; demonstrating just how broken financial markets have become, and just how desperate America’s fiscal situation is, whether it’s the “least dirty shirt” or otherwise.

5. Meanwhile, in the United States of Global Monetary Destruction, despite a negative 1Q GDP print and essentially all economic data screaming recession (such as this morning’s ugly ISM non-manufacturing miss), the 10-year Treasury yield has surged from a low of 1.64% in January to an eight-month high of 2.35% this morning. And scariest of all is that the so-called housing “recovery” – which in reality, only exists in “1%” houses owned by the handful of people benefiting from money printing – is on the verge of collapsing. Between plunging lumber prices, housing starts, and existing home sales – the latter of which, have barely recovered from 2008’s historic lows – the prospect of what havoc rising rates could wreak on this supposed pillar of economic support is too terrifying to even consider. This week alone, as reported this morning, the MBA’s composite mortgage/refinance index plunged by 8%, extending a string of weakness that will only accelerate if the Fed can’t figure out a way to reverse this deadly interest rate trend. If they can’t – and at some point, the utterly laughable concept of rate hikes will be permanently refuted by the inevitable “Yellen Reversal” – everything from stocks; to bonds, real estate, the U.S. budget deficit, and the Fed’s $4.5 trillion balance sheet itself, will be destroyed.

6. Ah, India – which despite the hideous Congress Party having been unceremoniously swept out of power last year, is still being run by the “world’s worst government.” I mean, talk about betraying nearly a billion and a half people; as the supposedly “pro-gold” Narendra Modi not only reneged on his implicit campaign promise to remove the onerous gold and silver import tariffs that have spawned an out of control black market, but actually proposed to “monetize” the gold of the world’s most gold-loving populace – by “borrowing” it via a Ponzi scheme even Charles Ponzi himself would laugh at. Such attempts have failed miserably in the past; and this one will not only fail, but prompt dramatically higher Indian gold (and silver) buying. Let alone, as highlighted by the Reserve Bank of India today lowering rates to their lowest level since…drum roll please…September 2013, when the Rupee plunged to its all-time low, prompting initiation of said gold and silver import tariffs under the guise of …drum roll please…protecting the Rupee. Well, “protect” the Rupee it decidedly hasn’t; as before this morning’s rate cut, it was within 7% of said all-time low; which, when it inevitably breaches it, will catalyze an utter tsunami of Indian Precious Metals demand. And putting the proposed government gold Ponzi in perspective, consider that even here, in America, where 99% of citizens have never held anything but the “reserve currency” – that has destroyed their net worth for 100 years – a proposal to lend gold to the government would be utterly laughed at. Let alone in India, where people measure their net worth in terms of gold; despise Rupees; and have been living with some of the highest inflation rates in the civilized world as the Central bank destroys their currency.

7. In Japan, the Yen has decidedly broken below six-month support at 120/dollar, plunging to 124.5 in the past week.  The Bank of Japan not only admits that even considering an end to Abenomics would be a “nightmare scenario,” but is now, overtly, monetizing stocks in the same maniacal manner as JGB’s, or Japanese government bonds.  With an all-time high trade deficit; and oil prices – “oil PPT” notwithstanding – relentlessly rising, the nation’s historic debt spiral is about to go parabolic.  As is inflation, as Japan – the victim of not only debt, but “demographic hell,” falls off the global economic map; potentially, yielding a Yen plunge to the 300+/dollar level experienced before its brief, three decade, Central bank fostered “economic miracle.”

8. Mere words cannot describe the Chinese equity bubble; which the decidedly “unpolished” PBOC fostered by last summer, amidst the weakest economic data in 35 years, unabashedly easing all facets of monetary policy.  Whilst the Chinese economy implodes; and its historic real estate, construction, and credit bubble bursts; the Shanghai Stock Exchange has risen by 140% since the first PBOC rate cut last summer.  And frankly, no chart I have ever come across screams “historic bubble” more than this one – depicting the amount of Chinese retail margin accounts opened since the market bottomed last summer. 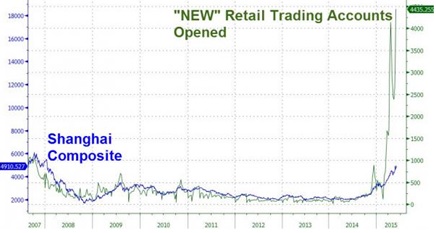 9. And all this, whilst the amount of physical gold supporting the world’s largest financial Ponzi scheme is less than $500 million worth; if, that is, it even exists.  Laughably, JP Morgan deposited enough gold in the COMEX’s registered inventory to avert default this month.  But still, that paltry amount is all that separates the historically suppressed Precious Metal markets from being liberated; which we assure you it will, when the “New York Gold Pool” is inevitably swamped by demand, just as the “London Gold Pool” in 1968.