Save Our Ponzi Scheme, Please!

It’s Tuesday morning, and the inevitable “end game” we’ve long written of – of a loss of confidence in the purveyors of history’s largest fiat Ponzi scheme – has never been nearer. Yesterday’s horrific financial market action – in which, relentless Cartel pressure notwithstanding, gold was nearly the only asset in positive territory, was but a taste of what’s coming. Shades of 2008 were clearly in the air – with financial “depth charges” launched from ports as far-reaching as China; Puerto Rico; and of course, Greece. Aside from “triple-A” sovereign bonds like those of Germany and the U.S. – and gold, of course – every other market was annihilated; from equities, to “lesser” sovereign bonds and commodities.

That said, watching the trapped rats that are today’s “powers that be” deploy their market manipulating algorithms, derivatives, and other “weapons of mass financial destruction” to “save” the markets was truly a sight to see – with a blatancy so pronounced, even the most inexperienced market watcher would have difficulty missing them. Sure enough, barely 12 hours later, the “rumor mill” of a “potential Greek deal” was churned, featuring speculation that Jean-Claude Juncker – the criminal President of the European Union, whose ominous comment that “we all win or we all lose” inspired yesterday’s must hear Audioblog – offered a “last second offer” to Greece; essentially, begging them to borrow more money under usurious terms, to “save our Ponzi scheme – please!”

Frankly, I expected a bit more from the supposedly most powerful people on the planet, who are well aware that the upcoming Greek default and Eurozone exit will likely commence a chain reaction of similar actions, yielding a collapse of faith in the European Central Bank . Which is why it was so comical that said rumor was squelched within one hour, when Greek Finance Minister Varoufakis unequivocally stated that Greece would default on its €1.8 billion interest payment to the IMF at midnight tonight. Which, it turns out, is also the terminus of 2012’s “bailout #2” – which clearly, will not be renewed, rendering Sunday’s proposed bailout referendum moot.

In other words, the end game for Greece will commence tonight, which is why it is painfully obvious how hard said “powers that be” are working to “calm” markets. To wit, as I write, the pathetic “last ditch” efforts keep coming, “fast and furious” – with German Finance Minister Schaeuble stating it’s possible for Greece to default on its debt, yet stay in the Euro. I mean, just how ridiculous can this get; as, with Europe refusing to bail Greece out, and Greece loathe to accept such funds irrespective – he is claiming Greece could still be bailed out. And again, the “no” vote he refers to below, is that of said referendum, theoretically to be held this Sunday. Which, given there is no bailout proposal on the table – with Juncker’s “last second” offer having been refused before the ink dried – has no reason to occur in the first place!

Regarding “markets,” the blatancy of such interventions reminds me of the relentless “rumors” and “countertrend moves” that occurred in stocks like Bear Stearns, Fannie Mae, and Lehman Brothers in their final days. Let alone, when accompanied by overt threats to expand said manipulation – such as ECB Board Member Benoit Coeur’s claim this morning that Draghi is “ready to use new instruments within its mandate” if necessary. You know, “whatever it takes” – no matter how destructive such unprecedented actions may be. In the words of Jim Sinclair…

“The world is not going to end. It already has, and you have not noticed. They will never learn, but why should they? These institutions are gambling with your money, not theirs. They win and they whack it up between themselves. They go wrong you lose in the trillions. There is a potential for an uncontrolled nuclear financial reaction in this outrageous form of greed driven madness. No longer does the Edison and Tesla of the world seek to invent a better world, just a better way to beat the markets using universal energy of the leverage in OTC derivatives via super computers. This is going misfire very badly. Each generation is crazier than its predecessor in their greed and penchant for money and power. The builders of real businesses are frowned upon. Our financial kids are downright dangerous. They seek not to better the world but to destroy all that is good in it for personal profit. The only invention welcome is one that means more paper profit. They have no limits on their desires. They cannot be satisfied by any amount. Their battle cry is ‘More at any Cost.’ They will cause a chain reaction financial dark energy that cannot be stopped by any central bank or all central banks together. Maybe we are going into a Super Financial Nova followed by a permanent Economic Black Hole where prosperity once existed? Maybe the rebellious IMF knows this.”

I am reminded of my favorite movie analogy, when trying to describe the Ponzi scheme Central banks have built the world round – by first printing money to the point that the entire world is saturated by debt, and addicted to zero interest rates; and next, manipulating markets by buying stocks and bonds, for instance, and naked shorting Precious Metals. To wit, in Fargo, what started out as a small problem – in that case, Jerry Lundegaard a bit short on cash – ended in essentially every main character, and several innocent bystanders – either dead or in jail. Likewise, the inevitable recession following the 2000-02 tech-wreck could easily have come and gone if the Central banks had left well enough alone. But instead, they compounded the problem a thousand-fold by taking interest rates to zero, monetizing everything in sight, covertly supporting stocks, suppressing Precious Metals, and giving the impression they were not only all-knowing, but willing to do “whatever it takes” to maintain a “new normal” in which recessions and bear markets don’t exist.

Well guess what, they do. Just ask the 90%+ of the world whose currencies have plummeted since the Federal Reserve starting exporting inflation en masse in mid-2011 – care of ZIRP, “Operation Twist”; QE3, and incalculable “off balance sheet operations” like the long-standing “swap agreement” it has with European banks, in which it supplies them free, freshly printed capital – but doesn’t report it, by classifying such transactions not as “loans,” but “swaps.” Or the countless thousands of businesses destroyed not just by the treacherous currency volatility caused by reckless Central bank actions – i.e, the “single most precious metal bullish factor imaginable“; but the 2008-like collapse of the world’s largest, most important business – commodities sales. Consequently, nearly all nations are in deep recessions – even if some governments fudge economic data more than others – with no place to go but down, given the massive, irreversible “deformations” said “Fargo-like” interventions have caused.

To wit, in February’s “supply response” I discussed the severe “manipulation dichotomy” of Precious Metals relative to other commodities – with the latter having been so artificially depressed, for so long, the upcoming supply response will be unprecedented. At least, on the upside – as conversely, the downside of the dozens of commodities artificially (if not inadvertently) supported by Central bank money printing, is nearly unprecedented. This is why, despite the so-called “recovery” propagandized by the Fed, the CRB Commodity Index appears likely to not only take out its 2009 spike bottom low in short order, but challenge lows going back to mid-1970s – when the gold standard was still visible in the rear view mirror, and global debt levels close to ZERO. 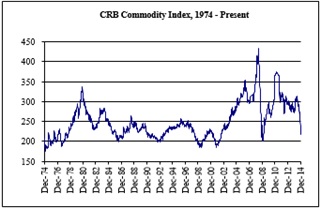 Just in the past 24 hours, the blatancy of such interventions has been as astonishing as their sheer size – as in Switzerland, China, and of course the U.S., where the PPT managed to close the “Dow Jones Propaganda Average” exactly 1.95% lower (can’t go below 2%, can we?), whilst all other global equity markets fell at least 3%. But nowhere more so than Precious Metals, which since their opening surge on Sunday was met by the 104th “Sunday Night Sentiment” raid of the past 106 weeks, the Cartel has maniacally, relentlessly “capped and attacked” – using the same algorithms we have observed for the past decade-plus.

To wit, COMEX silver open interest has now hit an all-time high level – which in any other market, would be indicative of soaring prices. But not silver, where such interest is due to naked shorting by “commercials” with no actual “commercial” interest in silver trading; as the massive open interest dwarfs the amount of actually silver outstanding – not just in COMEX inventories, but the world. This is the “giant pink elephant” Chris Powell of GATA wrote of yesterday afternoon; supplemented by last night’s blockbuster news that JP Morgan and Citigroup’s “commodity derivatives” exposure exploded during the first quarter – for contracts with less than one year until maturity, $300 billion to $4 trillion!

Moreover, the Office of the Comptroller of the Currency’s quarterly derivatives report – where such information emanated – revealed the category of “gold derivatives” was unceremoniously deleted; now, combined with foreign exchange derivatives so as to hide their size. In other words, as Chris Powell wrote in a follow-up article, the U.S. government is so fearful of the ongoing commodity market carnage (does the “oil PPT” ring a bell?), they have essentially commandeered them as well – and particularly Precious Metals like silver, whose tiny market size makes it especially prone to acting in an “unfavorable” upside manner.

It will, of course, in due time. And already this month we have not only seen a surge in U.S. Mint silver sales, but significantly higher “junk silver” prices whilst paper prices have been relentlessly suppressed. As for gold, “record demand” doesn’t appropriately describe the ongoing frenzy in China, Germany, and countless other nations where collapsing currencies, economies, and Central banking confidence are causing physical sales to hover at, or above, previous highs.

Again, all such machinations – illegal, unethical, and immoral – have been enacted in the name of “saving” history’s largest fiat Ponzi scheme. Or, at least, to preserve it as long as possible, to benefit the “1%” at the top of the financial food chain. However, the Greek implosion – which officially begins at 12:01 AM tonight – demonstrates how said scheme has finally hit the brick wall “Economic Mother Nature” erected. And thus, it’s just a matter of time before the “dominoes” start falling – far larger than Greece, and far more reaching in their horrific ramifications. Except, of course, in “safe haven” assets with the ability to not only withstand the traumatic political, economic, and social forces that must inevitably arrive, but thrive within them. Fortunately for you, they are still available – at prices, no less, well below not only the industry’s marginal cost of production, but its long-term cost of sustainability.