Gold [in $US terms] has now been at or pretty near the top of its up channel for an entire month now. Each challenge to break ABOVE the channel has been met with an even bigger announcement from the global financial “powers that be” that they have the situation “under control”. Thus far, they have managed to keep $US Gold within “bounds”…but they have not yet been able to produce a sell-off similar to the one which took place in the great deleveraging $US rally of late 2008. They are not going to stop trying. – Bill Buckler, Gold This Week, September 17, 2011

It’s madness, I tell you, madness! A friend of mine has $2 million with Chase earning a “preferred” interest rate of 0.7%. Why would anyone leave their money with a bank for a ridiculous seven tenths of one percent interest? This is not unusual. Most older and wealthy people still favor bonds and CDs for safety. Safety? Are you kidding me? Inflation is running more than ten times what they are getting in interest. My friend does not grasp that his two million dollar deposit, even after the 0.7% interest he earned, is actually worth $1,879,902 in actual inflation-adjusted dollars.   He LOST $120,098 to inflation. Actually he lost twice that much, because he locked his money up for two years (the $120,098 is a one year loss) in order to get the “preferred” rate of 0.7%. This is in the name of “safety.”

I pointed this out to him and also pointed out that gold has increased on average over 20% per year for the past 11 years. He is thinking about it. That usually means nothing will change. I just don’t understand the rationale of the masses. They just don’t get it and they don’t want to get it. The thought of our dollar losing value is too awful for them to admit to. So they float along, doing the same things that they always have done and refuse to see that the rules of safe investing have changed – forever!

The market reacted to the Fed statement regarding the purchase of bonds. Of course, gold was hammered. Here is what Jim Sinclair had to say about it:
Fed Notes Significant Downside Risk To Economic Outlook
September 21, 2011, at 2:22 pm 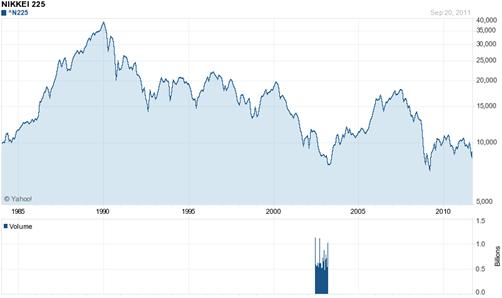 To wrap this up (before the PPT comes in and attempts to take the Dow positive for the day, so the media and Wall Street shills will call the Fed announcement a success), what the Fed did today was announce ALL-OUT DEBT MONETIZATION.  The benefit of the bond gains to the TBTF banks will be infinitesimal compared to the COLLAPSE in credit quality resulting from souring corporate and sovereign debts and soaring credit default swaps, no matter how much the Fed prints, or how large the ECB’s bastardized EFSF fund is capitalized at (initial proposals are $4 TRILLION).
I cannot emphasize enough how pathetic this ballyhooed announcement turned out to be, the product of two days of plotting nothing more than how to hold the system together for a few more months.  I doubt the banking system will be able to survive that long, as now we have reached DEBT SATURATION, MANIPULATION SATURATION, and frankly, SATURATION of ANYTHING that could possibly be used by TPTB to kick the can down the road any longer.
I am more confident than EVER that the PRECIOUS METALS EXPLOSION is at hand, and once it starts sometime this Fall I would not be surprised to see gold and silver go “no offer” much, much quicker than people can imagine.
And once that point is reached, it will no longer be possible to PROTECT YOURSELF from imminent hyperinflation.