Sorry to start today’s article with an intense blast of “manipulation proof”; but in a world of where reality has – temporarily – been so thoroughly usurped by lies and fraud, someone has to discuss reality.  Not that I’m the only one, of course; as aside from the Miles Franklin Blog, a handful of others – from GATA, to Eric Sprott, John Embry, James Turk, Bix Weir, Harvey Organ, and Turd Ferguson, to name a few – discuss it regularly.  As well as those reporting the reality of surging physical demand and plunging supply, like Andrew Maguire, Koos Jansen, and Steve St. Angelo.  And oh yeah, Elke Koenig, the President of Germany’s top securities regulator – who last year said “the manipulation of currency and precious metals is worse than Libor-rigging.”

Given the tomes I have already written on PM manipulation, I’m not going to rehash them this morning – other than to focus on why it has been done, in increasingly egregious fashion, since the global economy peaked at the turn of the century; the global monetary system broke in 2008; unfettered money printing was launched in 2012; and the “final currency war” accelerated last year. Which is, plain and simple, to mask the blatantly obvious evidence, more so each day, of the “end game” of economic implosion and currency collapse. In other words, “kicking the can” has never been a more rigorous, Herculean task; requiring 24/7 money printing, market manipulation, and propaganda, in increasingly blatant fashion, to prevent all-out, immediate implosion. To that end, never has a book provided as much insight into what men of power will perpetrate to achieve their goals than Mein Kampf, of Hitler’s obsession with destroying the “99%” for the benefit of the Aryan “1%.” And we all know how that turned out.

Which is exactly how this horror of a global fiat currency experiment will end – likely, sooner rather than later; just as every fiat currency throughout history has ended, with fear, misery, and destitution. Only this time around, no one will be spared, as not a single debt-wracked currency is backed by anything but the “full faith and credit” of the bankrupt governments that issue them.

Even I am in awe of the lengths these monsters are going to “kick the can” that last mile. Not so much that they’re attempting to usurp “Economic Mother Nature,” but the utter brazenness of how they go about it. To wit, each day the global economy weakens further. Each day, social and geopolitical tensions expand further. And each day, currencies from the dollar to the ruble to the zloty are devalued further, enriching an increasingly tiny “1%” at the expense of all others.

To that end, today’s news alone featured miserable Japanese consumption and capital spending data; the largest-ever monthly decline in Chinese housing prices; expansion of the West Coast dockworkers lockout; a fresh all-time low of the Baltic Dry Index; and the likely, perhaps imminent, collapse of last week’s Ukrainian “cease fire.” Not to mention, a plunging Empire State Manufacturing Index, featuring the largest decline in the forward six-month business outlook since January 2009 – i.e, the absolute low point of the worst financial crisis of our lifetimes; and last but not least, an unexpected plunge in home builder sentiment, amid plummeting prospective buyer traffic.

And this, following yesterday’s all-out collapse of the Greek bailout extension discussions – as Greece called the Euro Group’s February 16th ultimatum bluff, deeming a proposal to extend the bailouts “absurd” and “unacceptable.” Frankly, I’m not sure what they’re even discussing; as clearly, Syriza was not elected to extend the bailouts, but renege on them. After all, in a statistic even I have a hard time fathoming, more than half of Greece’s roughly €400 billion debt load is the €240 billion of “bailouts” foisted upon it by the evil “troika” – i.e, the European Commission, ECB, and IMF – since Greece’s insolvency first surfaced in 2010. Since then, Greece’s debt/GDP has exploded from 113% to 175%; whilst its economy has imploded by nearly 30%; and its unemployment rate skyrocketed from 10% to 26% – including a horrifying youth unemployment (under age 24) rate of 51%. And this, whilst the European economy itself imploded, yielding similarly explosive growth in debt and social unrest; and oh yeah, a 20% plunge in the Euro currency, to a ten-year low.

And thus, why anyone believes the Greeks have an incentive to remain in the European monetary system – and continue holding debts that are not only destroying it, but can never be repaid – is beyond me. In Finance Minister Yanis Varoufakis’ own words, Greece will no longer be a “debt colony”; and no matter how bad the short-term pain of a Euro “Grexit,” Greece’s only hope of salvation lies with a clean, debt-free slate. Thus, I could only chuckle when this morning, Germany’s Finance Minister, Wolfgang Schaeuble, extended the February 16th “ultimatum” (originally announced February 6th) to February 27th; i.e, the day before the current bailout agreement ends.

Actually, it was only yesterday when Eurogroup President Jeroen Dijsselbloem (the guy who admitted Cyprus-style bank bail-ins are the new European “template”) gave Greece until February 20th to agree to a bailout extension – before his will was usurped by said German “foot soldier.” To which, Alexis Tsipras responded by saying “Greek Democracy can’t be threatened”; and thus, he “won’t step back from his promises.”

In other words, the Euro Group is in complete, Keystone Kops-like disarray; whilst the ECB is amidst history’s most maniacal, suicidal combination of QE and NIRP; and half of Europe’s population, in open revolt. Consequently, if I see one more propaganda piece about how “Athens is hopeful of a resolution,” I’m going to puke. No, the only “resolution” on the horizon is the debt jubilee that, once and for all, ends the ill-begotten, ill-fated Euro experiment; laying bare a rotten, unsalvageable global monetary system, supported solely by money printing, market manipulation, and government sanctioned accounting chicanery. And by the way, if a “deal” is somehow conjured up – out of pure, unadulterated fear of instantaneous financial and economic collapse – it would only make the situation worse; as said “deal” would be nothing more than the “license to borrow and print” discussed in yesterday’s “anti-austerity mania.”

As for the odds of a “deal” materializing by the final deadline of February 27th, don’t for a second believe the Greek people – much less, Alexis Tsipras – can be “scared” into supporting continuation of the bailout horror via propaganda of a potentially falling stock market; as unlike Scotland and Switzerland, the Greek stock market is already dead and buried – and trust me, it won’t be saved if Alexis Tsipras forsakes his freshly-minted mandate, from the majority of Greek citizens, by agreeing to pile more debt onto the dead Greek financial carcass, so the ECB can bail itself out by monetizing it with freshly printed Euros. In other words, the “countdown to Grexit” – and universal realization that the Euro may well die – is just ten days away; to which all I can say is 10-9-8…

Which is probably why, yet again, we are being treated to – as I write –another violent paper smash; whilst the “Dow Jones Propaganda Average” – yet again – is supported by the same “dead ringer” algorithm I exposed three years ago. I mean, words cannot describe the blatancy at this point; starting with the fact that Sunday night was the first time since last President’s Day when a “Sunday Night Sentiment” PM raid was not executed. Yes, my friends; it’s been a full 52 weeks since gold has not been either smashed or “capped and attacked” on a Sunday night – even if the modest $5/oz gain it achieved was capped via prototypical “2:15 AM” EST.

Then, as now, “Sunday Night Sentiment” treatment was delayed until Monday night; but in doing so this year, just hours after said Greek bailout discussions collapsed – much less, the aforementioned litany of other PM-bullish developments – it couldn’t be more obvious what’s going on. Let alone, the “coincidence” of the seemingly arbitrary initial ultimatum of February 16th coinciding with a U.S. holiday, preventing gold from materially rising. Frankly, no less “coincident” than the “Save our Swiss Gold” referendum being held the Sunday after the thinnest U.S. trading day of the year; i.e., the half-day following Thanksgiving, when gold and silver were “coincidentally” smashed to their lows of the year, ensuring the failure of a referendum which, just weeks earlier, had popular support.

To that end, today’s massive Precious Metal smash started with the very same sentiment-crushing open that occurred a whopping seven times in November, when the Cartel was desperate to prevent failure of the aforementioned Swiss referendum. To wit, the below, unconscionable attack on silver relative to all other markets this morning (including Greek stocks!); which frankly, was even more stark if viewed a few hours earlier, when base metal prices were essentially unchanged. 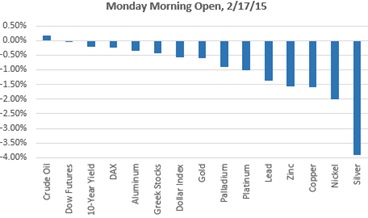 Moreover, as you can probably imagine, the real pain occurred at the same 10:00 AM EST “key attack time #1” the Cartel has utilized for two decades – which just happens to be coincide with the close of physical gold and silver trading, and execution of the Fed’s New York “Open Market Operations.”

Which brings me to today’s primary topic – as if the collapse of Greece, which I two years ago deemed my “top pick to catalyze the big one,” isn’t topical enough. Which is, what I have long discussed regarding the burgeoning “perfect storm” of plunging gold and silver supply and surging demand; the latter of which was validated by last week’s abysmal production outlooks by Goldfields and Kinross, to undoubtedly be followed later this week when the world’s top miners report earnings.

Not that the record gold demand that has 2015 has commenced with is new news – let alone, if India repeals its 10% import tariffs on February 28th. Or the fact that PM supply – particularly silver – is set to not only stagnate, but likely plunge in the coming years.   No, what’s even more striking of the supply response “Economic Mother Nature” is guaranteed to deliver is just how starkly it contrasts the situation in crude oil, to name but one of dozens of oversupplied, under-demanded commodities.

To wit, whilst not a soul in the MSM – or Wall Street, for that matter – discusses the dire lack of Precious Metal supply relative to surging demand, essentially all are jumping on the “V-shaped” oil recovery bandwagon, knowing full well that if oil prices don’t rebound soon, it could cause a cataclysmic global economic collapse. Which, of course, is already occurring, as evidenced by the all-time low Baltic Dry Index; plunging GDP and earnings estimates; and imploding commodity and currency prices.

Yes, WTI crude has recovered to $51/bbl from last month’s low of roughly $44/bbl – in my mind, undoubtedly “aided” by algorithmic support – to the miserable level it started the year at. Unfortunately, global economic activity has since plunged; whilst oil supply has been maintained despite plunging rig counts, yielding an 80-year high in inventories. And yet, every MSM outlet imaginable claims “the bottom” is in – whilst predicting that gold and silver, with diametrically opposed supply-demand outlooks, are on the verge of collapse. And this, amidst the worst economic outlook of our lifetimes, and the most positive Precious Metal fundamentals imaginable.

And thus, we can only say thus. That is, failing to heed “Economic Mother Nature’s” inevitable “supply response” could be dangerous to your financial health – particularly in Precious Metals, where countless “Black Swans,” like Greece for example, threaten to vault near-term demand into the stratosphere.