It’s Saturday afternoon, and I have A LOT to get through in my allotted three pages; which is why it’s amazing that I’m “wasting space” by showing you what showed up as Yahoo! Finance’s “top story” this morning.

To wit, this week featured myriad, hideous economic data and geopolitical developments – including Janet Yellen’s “most unequivocally dovish FOMC statement in memory“; to Congress, no less, where the Fed Chairman NEVER espouses incremental information regarding potential monetary policy. And yet, chief MSM propagandist Yahoo! Finance thought it prudent, and journalistically ethical, to not only post a completely untrue article, but one that was first published two months ago. This is exactly why I have picked on them – and other MSM propagandists – for so long, and why you need to be very careful where you get your information.

While on the topic of fraud, I might as well discuss the ugly, inevitably catastrophic results of TPTB’s unprecedented, three-pronged assault on reality – utilizing money printing, market manipulation, and propaganda to “kick the can” as far as possible; whilst praying, in the words of Rose DeWitt in Titanic, for an “(economic) absolution that will never come.” Starting with the incredible fact that, care of the mega ECB QE program that hasn’t yet started, there are now €1.9 trillion of European sovereign bonds trading at negative yields, with essentially no offers to sell. Worse yet, some of Europe’s worst PIIGS credits – amidst a Greek crisis sure to yield a “Grexit” sooner rather than later – are heading toward the zero bound as well. No, this can’t end badly.

Or how about this astonishing chart showing how U.S. stocks, like European bonds, are trading solely on expectations of relentless money printing and market “support.” And this, as U.S. macroeconomic data plunges in falling knife fashion, in an environment featuring collapsing oil prices and a record low Baltic Dry Index, yielding expectations that S&P 500 companies, cumulatively, will actually generate negative sales growth in 2015. But then again, with mis-incentivized, sociopathic CEOs borrowing trillions to finance record stock buybacks – at record equity valuations, no less – what could possibly go wrong? I mean, think about. IBM, one of America’s historically best companies, borrowed an incredible $17 billion between the first quarter of 2012 through the second quarter of 2014 to fund a whopping $40 billion of buybacks, whilst its revenues, margins, earnings, and market plunged. And what have IBM shareholders received as a result? Since this suicidal borrowing spree commenced, IBM stock – which until last year, was the Dow’s most heavily weighted company (Goldman Sachs is now); is down 16% compared to a 38% gain in the PPT-supported “Dow Jones Propaganda Average.” And as for IBM’s financial condition, its net debt to capitalization has surged from an already dangerous 51% to a potentially bankruptcy-yielding 71%.

Yes, the deformations of money printing, market manipulation, and the associated reckless spending gone wild have become boundless, as history’s largest Ponzi scheme enters its terminal stage. To wit, I have spoken numerous times of the insanity of the U.S. government guaranteeing Puerto Rican debt despite it not actually being a part of the United States; and of how this implicit “guarantee” has enabled Puerto Rico’s banana republic government to borrow unlimited capital at ridiculously low rates. Well, just yesterday, Puerto Rico’s third largest bank failed, with a non-performing loan ratio equal to that of Greece’s banking system – forcing the U.S. FDIC to bail them out. Remember, the tiny island of Puerto Rico, with just three million people and a tourism stigma exceeded only by Cuba, has a whopping $165 billion of debt – representing an incredible 1,500% of GDP. Moreover, it has had zero GDP growth for years; and currently sports across-the-board junk ratings; causing, as you can imagine, surging interest rates and credit default swap spreads. In other words, its finances are worse than Greece’s; with no “troika” to lend it money when it defaults, except the U.S. Federal Reserve – i.e, U.S. taxpayers – via said “implicit guarantees.”

Speaking of “bailouts,” just this morning the PBOC (People’s Bank of China) again lowered interest rates, extending a veritable swarm of monetary easing measures that commenced six months ago – like the Fed, following misleading bluster regarding potential tightening measures. And what has been the result of such monetary lunacy? Well, Chinese GDP “growth” has plummeted to its lowest level in 25 years; replica watch whilst its historic real estate, construction, and shadow banking bubble has continued to plunge. But have no fear, as the 50% increase in the Shanghai Stock Exchange since such measures commenced must portend economic “recovery,” right? And by the way, it’s funny how no one – aside from the Miles Franklin Blog, and a scant few others – has discussed how the Chinese Yuan continues to be “devalued” by the PBOC, hitting a new 22-month low Friday. Trust us, the maniacal monetary easing measures (i.e, money printing) pre-sage the inevitable de-pegging of the Yuan from the dollar; as due to the relentless dollar surge – due to a fearful world fleeing to its superior liquidity – China’s manufacturing sector is being ravaged by serial currency debauchers like Japan. And when it inevitably does de-peg, the impact on global economics, financial markets, and geo-politics will dwarf that of astrophysics’ Big Bang in terms of its broad, dramatic(ally negative) impact. Not to mention, on Chinese gold demand, as Yuan-priced gold skyrockets.

Speaking of non-U.S. dollar denominated gold, I want to follow up my two-day repudiation of one of the industry’s most notorious flip-floppers, who currently claims gold will fall below $1,000/oz due to “deflation”; whilst, I might add, the Dow surges to 31,000 because – get this – investors have ‘nowhere else to put their money.” And oh yeah, in the typical “short-term bearish, long-term bullish” form characterizing the majority of PM newsletter writers, he then expects gold to surge to $5,000+, due to some sort of ‘mega-deflation.’ Really, I’m not making this up.

In Wednesday’s Audioblog, I discussed how gold and silver have always been the best performing asset classes during “deflationary” periods; although “deflationary” is in quotes, as in today’s global fiat currency regime, currency deflation is impossible. Next, in yesterday’s Audioblog, I showed how, amidst the past six-month’s global commodity crash, U.S. dollar denominated gold prices were unchanged whilst essentially all other “deflation sensitive” asset classes plunged. And today, I’ve taken the analysis one step further – in depicting how gold in other currencies fared during this “deflationary” period; as the aforementioned dollar surge global currency collapse decidedly did not yield “deflating” currencies. To that end, take a look at the chart below, and tell me if you think gold, as priced in currencies that countless billions use each day, “deflated” or “inflated.” And FYI, the only reason I didn’t include Russian Ruble-priced gold was because its 96% gain would have taken the chart so far off scale. 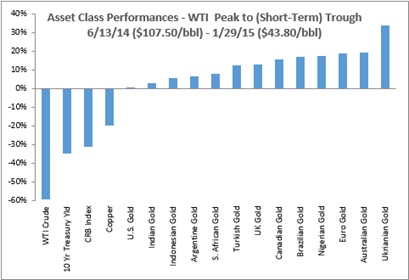 OK, now that such “housekeeping” issues are out of the way – without even mentioning the utter swarm of horrifying Greek headlines this weekend, of its pending political, financial, and social collapse; let’s get to today’s primary topic, regarding the massive demand underpinning gold’s (and silver’s) foreseeable future.

To start, let’s just re-emphasize that the “supply response” we forecast in Precious Metal mining will be historic – given decades of price suppression and capital strangulation in a business becoming dramatically more difficult to execute, ceteris parabus. Which, following the hideous year-end mining earnings reports we discussed last week, is set to commence now. Throw in the equally historic establishment of Far East physical exchanges and “price fixes,” – as discussed in this must hear interview with Andrew Maguire – and you can see how primed Precious Metals are to break the Cartel’s deadly, world-destroying grip.

The only remaining question, thus, is when exploding global physical demand – which in 2014, likely equaled 2013’s record level – will swamp the remaining supply “fumes” surreptitiously fed into the market to support hundreds of billions of naked shorted paper contracts. To start, we know Chinese gold buying in the first six weeks of 2015 – as measured by Shanghai Exchange withdrawals – were 17% ahead of last year’s pace. And undoubtedly, the burgeoning gold bull markets in nearly all currencies but the dollar is fueling expanded buying across the globe. Let alone in India – traditionally, the world’s largest gold consumer – where Rupee-priced gold came within 16% of its all-time high last month. To that end, today’s “disappointing” announcement that the newly elected, supposedly gold-supportive Modi government, has – like Alexis Tsipras’ Syriza party – already forsaken its implicit campaign promises, by not reducing the onerous 10% gold and silver import taxes.

One reader wrote me this morning, claiming this was “disastrous” for Indian gold demand. However, I disagree completely; as now that the public realizes the Modi government is assuming the disgraced Congress Party’s money-printing frenzy (and this, with the Rupee within a stone’s throw of its all-time low), citizens will likely step up purchases significantly; as frankly, a 10% tariff is immaterial when one’s financial health is at stake. Plus, the Indian black market will only grow stronger – likely, exponentially so; as no one on the planet – including the Chinese – replica watches are more fearful of fiat currency devaluation than the Indians.

And last, but certainly not least – given today’s article title is based on it – I wanted to bring up the incredible news that Apple, which is taking over the global technology scene in a manner making Microsoft’s meteoric 1980s rise look ordinary, will this week launch its new iWatch product, which it believes will explode in popularity. Starting now, Apple plans on producing a million units per month, each containing two troy ounces of gold; and per this article, simple math demonstrates that this level of demand will take out roughly 30% of global gold mine production.   To a man, I have no idea if the iWatch will catch on; but given its unique mix of Apple cache and physical gold, it wouldn’t surprise me if it becomes one of the hottest retail products in China, watches replica and who knows where else. And if it does, the “vice” of physical supply will only tighten on a Cartel near the end of its manipulative rope already. To that end, how funny would it be if, in the face of the myriad, massively gold (and silver) bullish factors engulfing the planet each day, it turns out that APPLE turns out to be the straw that breaks the Cartel’s back?