The Dumbest Central Banking Statement Ever

How committed is the Miles Franklin Blog to guiding you through the unprecedented, global economic collapse that accelerates with each passing day? Well, I currently have a horrific case of bronchitis – to the point that I can barely speak, and spent much of the past 48 hours at rest. However, I still posted my rebuttal to Harry Dent’s “deflation sensationalism”; and here I am Monday afternoon, with a broad litany of “horrible headlines,” propaganda, and market manipulations to expose.

This is another of those days where it’s difficult to select a single topic; and frankly, I could write a book on the potentially hyper-inflationary impact of this weekend’s surprise Chinese reserve requirements cut alone. Not to mention, the PBOC hinting it may shortly offer its own version of Quantitative Easing, by enabling countless municipalities crippled with high yield debt to “swap” it for low-yielding PBOC obligations. In other words, the most Precious Metal bullish news imaginable if this were a freely-traded market world – which of course is not the case; at least, not yet. Instead, we were forced to endure yet another ridiculous paper raid – starting at exactly the “2:15 AM” open of Western paper markets, via prototypical Cartel Herald “cap and attack” pattern.

And this, despite not only the aforementioned, massively Precious Metals bullish PBOC news, but these, equally PM-bullish headlines…

3. Shanghai Gold Exchange withdrawals, as of April 3 rd, not only running 24% above last year’s feverish pace, but accounting for more than 90% of total global production!

4. A near disastrous weekend for the imminently concluding “Greek tragedy“; starting with Russia’s official refutation of a desperate rumor that it was going to advance Greece a measly €5 billion loan, based on prospective royalties of a supposed trans-Greek gas pipeline that would be completed in – get this – 2019. Otherwise, the story remained the same, featuring all manner of ugly threats, innuendo, and rhetoric from both sides – including Greece vowing not to cross its anti-austerity “red line” – ahead of this Friday’s likely monumental failure of a Euro Group meeting, and next month’s increasingly likely “Grexit.”

With the aforementioned, mythical Russian €5 billion, Greece would have bought itself but a few weeks – as well as a merciless “big brother” intent on exploiting it worse than the Euro Group itself. Without it, Greece is on the verge of default; which is probably why draconian capital controls were decreed this weekend, causing Greek bond yields to surge to their highest levels since late 2012. Worse yet, a report surfaced that European banks are not only on the hook for as much as €110 billion of potentially defaulting Greek loans, but that number has “more than doubled” in the past six months.

5. A scathing IMF report warning of an upcoming global liquidity shock, as “an illusion of liquidity has beguiled financial markets across the world, spawning some of the worst Wall Street excesses in modern times.” Really, you must read it, to see just how “deformed” global economies and financial markets have become, care of seven years of unfettered money printing and market manipulation.

6. Comments from Saudi Arabia’s oil minister that it has no intention of backing off the record oil production levels achieved this month.

7. The deployment of U.S. paratroopers in Ukraine, after Russia said its missiles will target NATO member States

8. An utterly abysmal Chicago Fed National Activity Index reading, of -0.42 in March versus -0.11 in April, and the consensus of an increase to +0.15

9. More completely ambiguous statements from “Mr. Goldman Sachs” himself, Bill Dudley of the New York Fed; in validating last week’s “death of credibility” Audioblog by claiming to be “hopeful” of a Fed rate hike “later this year.” Of course, in true Fedspeak gibberish, he claimed “economic performance will determine the Fed’s policies”; and thus, “we have to see what unfolds.”

10. Surging bond yields in America’s “next Detroit” – Chicago – where economic activity is plunging (note the aforementioned Chicago Fed National Activity Index), and the risk of a catastrophic debt default grows ever nearer.

11. Last but not least, a scathing dismissal of the so-called economic recovery by none other than leading MSM propagandist Bloomberg; which, in an article titled “the U.S. economy keeps disappointing,” revealed exactly what the Miles Franklin Blog has been claiming all along; i.e, we are already in an environment as weak as 2008, and getting worse each day – as measured by Bloomberg’s U.S. “Economic Surprise Index”… 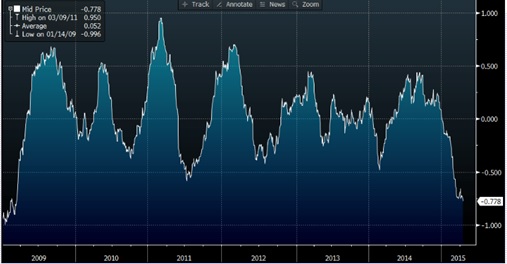 Sorry if my “message” isn’t as coherent today as usual; but I think it’s quite powerful nonetheless, and given my head is swimming with medication, it’s the best I can do. Which is why I saved my best for last; i.e., the “dumbest Central banking statement ever,” care of none other than “Goldman Mario” Draghi himself.

Not that this infamous “title” doesn’t have many suitors these days – from Shinzo Abe, to Mark Carney, Helicopter Ben, and Whirlybird Janet herself. However, in using the worst ever “Dirty Harry” impression, Mario Draghi “took the crown” this weekend, in claiming it was “pointless” for speculators to short the Euro currency.

“Pointless?” Now there’s an interesting choice of ambiguity, even for a powerful Central banker. Pointless, as in you will “lose money” in doing so? And if so, how do you know that, Mario? Last I looked, neither the ECB’s nor your personal forecasting record has been even modestly close to reality. But more importantly, lending credence to today’s article title, is that Mario Draghi said the exact same thing in – get this – August 2012, one month after his infamous “whatever it takes” speech gave birth to the historic, unprecedented European sovereign debt bubble.

At the time, the Euro/dollar exchange rate was 1.23; and yet, “whatever it takes” and all, it has plunged all the way to 1.07 since – i.e., a fresh 12-year low. And this, with the ECB’s gargantuan, 20 month, €1.2 trillion QE program having only started last month! Anyhow, Draghi completed the “dumbest central banking statement ever” by not only calling it “pointless” to short the Euro, but challenging traders to do so, at their own risk. Frankly, even I am short of words to describe such lunacy; which is a good thing, as whenever I open my mouth, I’m attacked by a coughing fit!