The Game Is All About Creating Volatility

I noticed that Bill Holter is submitting an article today titled “They act like it matters.”  I haven’t read it yet – and I look forward to reading it, but that point of view is in line with Jim Sinclair’s line of reasoning – “QE to Infinity.”  Sinclair never said that the Fed wouldn’t “taper,” or cut back a bit, he just said they never could STOP.  Any cutback has to be minor, because the worst thing that could happen to the economy (and housing, bonds and the stock market) is rising interest rates.  Without meaningful (meaning a LOT of) QE, interest rates will rise.  In fact, they are rising in spite of QE.  Even a small “Taper” will send the 10-year rates above 3%.

I could see this coming and started the process to re-finance my Minneapolis mortgage in June.  It took three months for the bank to complete the process and the new paperwork is in the mail to me now.  I am locked in at what will soon be looked at as a great rate!  After tomorrow’s announcement, home re-financing will drop off dramatically and rising rates (based on the 10-yr bond) will cool off the housing market.  I can’t believe this will be good for the bond market or the stock market, even if the “Taper” is only 5% or 10%.  We shall see.

The new Fed head has one Heck of a job in front of HER.  Summers and Geithner are not exactly my favorite people but at least they are smart enough to step away from the approaching train wreck!

The following is from 5 Min. Forecast:

Meanwhile, the Most Anticipated Fed Meeting Ever gets underway tomorrow. Come Wednesday afternoon, we’ll know whether the Fed’s Open Market Committee will “taper” — and if so, by how much.

“I think maybe they will taper 5 or 10 or 20 billion dollars off the current $85 billion monthly purchase of assets,” says the Gloom Boom & Doom Report’s Marc Faber, “and they would say they will reassess the situation depending on economic and market conditions.

“I believe the U.S. economy is weakening,” he adds in an interview with the Thai newspaper The Nation, “and if it gets worse they will have to even increase the purchases, maybe even to $150 billion a month.”

Investment implications: “There is nothing safe anymore. The U.S. money printing has distorted all asset prices while cash in the bank has not given you any return when inflation is adjusted.

“My investment strategy during this time is that you have to diversify and minimize your risks from economic, political, geopolitical and other factors. Your portfolio should include properties, stocks and equities, corporate bonds, gold and silver, plus cash. It should be 25% of each, or 125% — just to mimic the U.S. accounting standard where things now do not add up.”

Logic would suggest that the Fed hold the line on QE.  John Williams wrote:

Given ongoing central-bank concerns for systemic stability, any apparent cutback in systemic liquidity most likely will be of little substance.

Whatever happens, the Federal Reserve almost certainly will remain the primary manipulator of the U.S. financial system and domestic liquidity, in an ongoing effort to avoid banking-system collapse.  Based on precedents set in 2008, the U.S. central bank should continue to pursue whatever avenues it deems necessary, at whatever cost, to keep the banking system afloat.  The general economic and financial outlook here has not changed, and it is not about to change.

Julia Child (the noted food expert – and OSS undercover agent in 1942) once told my wife (who was in the food industry and met her several times) “A day without butter is a day without sunshine.”  She also said, “If you’re afraid of butter, use cream.”  I feel the same way about Zero Hedge – A day without an article or two from ZH would be like going on an information diet.  Below is an article from Zero Hedge:

Reality Is Breathing Down Bernanke’s Neck

Now that Syria has been disposed of – that is, indefinitely consigned to failed state purgatory – the world can focus its remaining attention on the almighty taper. We’re with those who think we’ll get a taper test. That is, the Fed will cut back ten or fifteen percent on its Treasury bond purchases to see what happens. What happens is perfectly predictable: interest rates shoot above 3 percent on the ten-year and holders of US paper all the world round fling them away like bales of smallpox blankets and… Houston, we’ve got a problem. After a month (or less) of havoc in the bond market, and the housing market, Mr. Bernanke will issue an advisory saying (in more words than these) “just kidding.” Then it will be back to business as usual, which is to say QE Forever, which might as well be saying, “game over.”

One must feel for poor Mr. Bernanke. He’s tried to run a long-distance foot race against reality and now it’s breathing down his neck near finish line.

If this doesn’t look like computer algos stuck on repeat, I don’t know what does? Friday and Monday’s pattern look almost identical (except for the aftermarket rise). The game is all about creating “volatility,” to scare people away from gold and silver.  We have been reporting enormous demand (rapidly falling physical inventories at GLD and Comex) for some time, so there are no shortage of willing buyers at these prices.  Leading the way are the usual suspects, the Chinese and the Indians, but you have to know that there is big money here in the US that also are grabbing whatever they can get their hands on too.  Push down the price with naked shorting on Comex and buy the physicals.  That’s a plan and that is exactly what seems to be happening now.

The following is from Seeking Alpha:

Every time I read about cuts to Social Security, my blood boils. A senator, after only one term in office (6 years) is entitled to a full pension at age 62. You and I have to work for 46 years, and if we want to collect SS at age 62, we are forced to give up 25% of what we earned.

This country is full of dumb, lazy people who know all about the Kardashians but can’t bother to find out how the government and big business are stealing the country from under their noses. And then they wake up one day and discover they can’t earn enough money to pay their bills because the inflation the government says doesn’t exist has priced everything out of reach. I bet no government official has been to a supermarket in the last 5 years and seen real prices–probably because the maid does the shopping. – Sharon S

This is something that should be very relevant to investors who own physical gold and the gold ETF’s (GLD, PHYS, and CEF) because any abnormal inventory declines may signify extraordinary events behind the scenes that would ultimately affect the gold price. 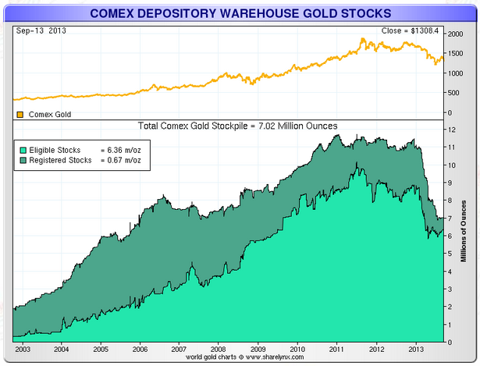 The demand side of the equation is clear – but the supply side is even more encouraging for the bulls.  The producers, the miners are faced with rising costs and falling prices.  Many of the large gold mining firms are cutting their exploration budgets.

In an article from Mining Weekly, a month ago, they pointed out that AngloGold Ashanti Limited (NYSE/AU), one of the biggest gold producers in the global economy, stated the company is looking to cut expenses over the next year and a half by $500 million.  They will reserve their capital expenditures for investment in only their highest-quality assets.

Newmont Mining Corporation (NYSE/NEM), another major gold producer, said they reduced their exploration spending by $362 million from the same period in 2012.

Less investment in exploring for new projects leads to less future production.  If the senior sector is cutting back one can only imagine how difficult it is for the juniors and the exploration sector.

Unless the price of gold starts to rise quickly, many gold producers could well shut down mines that produce gold and silver at these prices, which will lead to an even smaller supply of gold and silver bullion.

If the current low prices continue, the resulting decrease in supply and increased demand in physical gold and silver will flip things around sooner than many expect.

Here are two of Jim Sinclair’s postings that tie into my thoughts in today’s newsletter below:

The end of the Comex as the price discovery mechanism of gold is not simply near, it is here!

The last time that the claims per ounce were nearly this high was in the late 1990′s. At that time the central banks had to intervene to keep one or more bullion banks from faltering. It occurred during a period of coordinated bullion selling from the central banks into the market under the Washington Agreement, culminating in the notorious gold dumping known as Brown’s Bottom. At least the Germans still have a receipt. That selling failed to hold the line, and shortly thereafter gold began its great bull market run.

Sir Eddie George, Bank of England, reportedly in private conversation, September 1999  The first chart below shows that rather nicely. Nick Laird, the maestro of charts from Sharelynx.com, was kind enough to go back and pull all the available data. It helps to complete the picture don’t you think?

One difference this time is that the fellows who examine the more detailed reports tell us that the big boy of the bullion banks, JP Morgan, is said to have already liquidated their large short position and gone net long gold. Perhaps they are well advised.

If this is true they would benefit greatly from another bull run. And since gold has been reaffirmed as a Tier 1 asset along with cash and government securities, it is literally ‘as good as gold’ for the Banks’ balance sheet, n’est-ce pas? How fortunate for America’s favorite financier.

QE to infinity or the Dow in the crapper? What will Bernanke’s parting shot be, historic career suicide, or a somewhat clean departure?

The stock market is getting ready for a clout if he chooses unwisely.

WASHINGTON (MarketWatch) — Topsy-turvy, herky-jerky or whatever you call it, the grudging U.S. recovery just can’t seem to break out of a pattern of fits and starts.

Many economists thought the U.S. was primed to accelerate in the third quarter because of faster job growth, an uptick in wages, strong home sales and even an improved manufacturing sector.

Instead, hiring tapered off, consumers pared spending and Americans have lost some confidence. The likely result is slower growth in the third quarter compared to the late spring and early summer.

“The languid August results underscore the big picture point that I have been hammering away at for a while: the vaunted second-half acceleration in the economy ain’t happening,” wrote Stephen Stanley of Pierpont Securities, one of the few economists who’s staked out a conservative outlook.

The latest economic shudder won’t make it any easier for the Federal Reserve to justify the beginning of the end for a massive stimulus program designed to boost U.S. growth. The central bank is widely expected this week to announce plans to scale back purchases of government and mortgage-related bonds.