Initially I was going to write of tomorrow’s FOMC meeting – when once again, “Whirlybird Janet” will lie about “recovery,” “tapering,” and the Fed’s ability to predict and/or improve the future.  As David Stockman eloquently puts it…

When Bernanke previously, and Yellen now, appear before the Congress or press and piously intone about their full employment ‘mandate’ being a license for perpetual money printing, they are simply indulging in a self-serving lie.

In recent weeks, the Fed has successfully “maneuvered” markets to match said propaganda – such as attacking paper gold at the COMEX opening today, seconds after it was reported CPI inflation was much higher than expected, and housing starts and permits much lower than expected!  And thus, the odds of a significant policy change tomorrow appear slim, so we’re not going to waste time on it.  Fear not, Yellen’s “Jimmy Shaker Day” is coming – per Gary Sinise’s warning to Mel Gibson in Ransom; but unlike last week’s ECB “reckoning day” we don’t expect it tomorrow.

Conversely, this week’s shocking revelations of the “Frankenstein monster” created by five years of unprecedented market manipulation must be discussed at length.  In 1992, Ross Perot famously discussed the “giant sucking sound” of American jobs being sent overseas, but such a cacophony pales in comparison to the complete destruction of volume, volatility and rationality in what were once freely traded financial markets.  Frankly, the best comparison I can make is the tide receding before a tsunami, which is exactly what the global economy is on the verge of being swamped by.  In other words, just as Janet Yellen must eventually acknowledge “QE to Infinity,” the hyper-inflationary tide must destroy the global monetary system likely, far sooner than most can imagine.

Yahoo! Finance’s “top story” this morning couldn’t portray the unparalleled foolishness of today’s “mainstream madness” more aptly citing a “slight ease in Iraqi tensions” as the reason stock futures were modestly higher.  Clearly, the Iraqi civil war is dramatically intensifying so much that the U.S. may actually “ally” with Iran to achieve its goal of maintaining access to Iraqi oil exports.

I had thought the 2003 invasion was military, political and financial suicide, but partnering with religious fanatics from our sworn enemy – who just last year, we threatened to destroy?  I mean are we nuts?  As long-time readers know, I am apolitical when it comes to party lines.  And thus, when I spot foolishness, I call it for what it is.  Consequently for those that don’t own even a modicum of precious metals insurance, feast your eyes on the latest Washington brilliance on why we intend to engage fanatical Shi’ite Iranians to fight fanatical Sunni Iraqis, both of whom hate America more than each other…

“Why did we deal with Stalin?  Because he was not as bad as Hitler.  The Iranians can provide some assets to make sure Baghdad doesn’t fall.”

In other words, America has gone mad – in not screaming for its politicians to avoid another catastrophic Iraqi quagmire; let alone, a potentially disastrous re-incarnation of the Cold War.  If either cause is actively engaged, the odds of World War III commencing will be dramatically increased; and frankly, we wouldn’t be surprised if one or both actions are taken given that Congress always does what’s “worst for America, but best for precious metals.”  Last week’s Audio Blog was titled “End of the Black Swan – Almost,” as nearly nothing surprises us anymore.  And given that both Iraq and the Ukraine appear set to explode – at a time when American “confidence” is plumbing historic lows – we have never been more comfortable with our precious metal holdings. 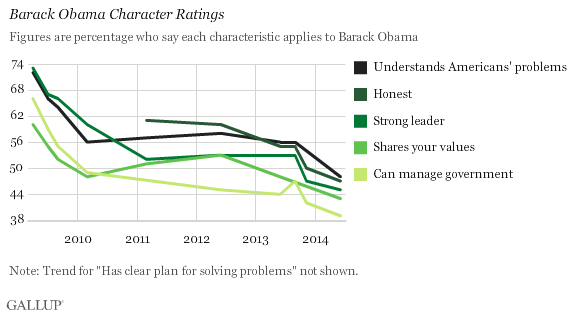 Newton’s third law states that for every action there is an equal and opposite reaction.  This is mathematically true, but in financial markets “overshoots” tend to be dramatic.  And thus, when said overshoot from today’s historically overvalued markets inevitably arrives – either in nominal terms or via hyperinflation – the odds are heavily in favor of the end game commencing i.e., the collapse of debt-infested, worthless pieces of scrip like the dollar, Euro and Yen.  The same goes for precious metals which simple math dictates should be many multiples higher – by our estimates, at least 20x more than today’s suppressed prices and in silver’s case, perhaps 50x-100x.

As for the giant sucking sound, we refer to the complete and utter implosion of market volumes and volatility since the Federal Reserve and other “leading” Central banks commandeered them.  Many believe the starting point of such insanity was 2008 when TARP, TALF and myriad taxpayer-funded bailouts were injected into the market; let alone, covert operations to “stabilize” markets like the $16 trillion of “secret loans” the Fed lavished on global governments, institutions and corporations.  However, we believe the true “point of no return” was the summer of 2011, when Global Meltdown II shocked the Central banks by highlighting how their initial money printing group had decidedly failed.

Since then the Fed has led a global effort to “reflate” markets at any cost – utilizing not only unfettered money printing and market manipulation, but history’s most aggressive propaganda scheme.  Mario Draghi’s infamous July 2012 statement that the ECB would do “whatever it takes – and believe me, it will be enough” exemplifies such hubris perfectly.  And as we saw last week, they most certainly will even if they attempt to break every one of “economic mother nature’s” laws.

Unfortunately, even they didn’t realize the power of their printing presses; as in so aggressively using them to “prove” the economy was improving, they created massive price inflation, historically inflated stock valuations, a “chase for yield” that has made fixed income investment more risky than at any time in history and an equally ominous “chase for volatility” that has caused leverage derivatives activity to surge to record highs.  Such gargantuan bubbles dwarf those of 1929, 1999 and 2007 with no conceivable way out – other than the mother of all crashes be it “2008 style” or Weimar Germany “hyperinflation style.”

The problem of course, is that when a market is effectively cornered there is no way of exiting it without catastrophic losses.  In other words, the Fed can claim to “taper” all it wants, but as for actually selling $4.5 trillion of toxic overvalued treasury and mortgage assets it would be impossible to do so.  Let alone, the $29 trillion of global equities we just learned central banks cumulatively own – confirming what the Miles Franklin Blog has said all along; i.e., global “PPTs” have in fact been supporting markets 24/7 for years.

Think about how insane this amount is using the example below for context.  To wit,  the historic Chinese construction and real estate bubble was built on $14 trillion of unregulated “shadow banking” loans over the past five years – atop an unprecedented collateral re-hypothecation Ponzi scheme – putting even America’s fiscal lunacy to shame.  These bad loans must eventually be liquidated at substantial losses causing catastrophic “collateral damage” throughout the global economy.

However, $14 trillion is a pittance compared to the insane risks Central banks have taken when considered in percentage terms.  To wit, the $14 trillion of Chinese loans represent just 15% of the $100+ trillion of global debt outstanding (excluding those inherent in unreported over-the-counter derivatives).  Yet such amounts pale in comparison to the Fed’s insane ownership percentages of U.S. Treasury and mortgage-backed bond instruments at roughly 33% and 40%, respectively.  Worse yet, the aforementioned $29 trillion of Central bank stock ownership represents an incredible 50% of the world’s equity market capitalization creating a situation wherein volume and volatility have been all but eliminated; and worse yet, enabling governments to have the means to ultimately control the management of half the world’s corporations.

Unfortunately such “Greenspan/Bernanke/Yellen Puts” engender further rampant speculation pushing valuations to still more stratospheric levels.  Moreover, when such gargantuan concentration percentages are reached there is no one left to sell to.  In other words, the Central banks have become the “greatest fool;” and unless they hyper-inflate, prices have only one way to go – straight down!

This is exactly what is occurring in the Japanese government bond market which no longer trades at all; as at 0.6% yields why would anyone be crazy enough to buy the 10-year obligation of a hopelessly insolvent entity?  But then again, why would you sell if said entity has promised to prevent prices from falling with unlimited monetization?  And then there’s the case of said “yield chase” – as exemplified by this morning’s insane auction of B+ (i.e. junk) rated Kenyan government bonds.  Kenya may be one of the world’s worst investment credits; but paying 6.75%, its order book was 4x oversubscribed equating to 20% of the nation’s entire GDP!  Gee, I wonder how that will turn out.

Scarier still, not only is yield being chased at all costs – under the assumption of everlasting Central bank support – but volatility.  According to the Bank of International Settlements, “over-the-counter contracts” – i.e., the very same derivatives that nearly destroyed the world in 2008 – have soared by a multiple of five in recent years to a record $710 trillion.  Yes, trillion with a “t” – which would have been quadrillion if not for recent arbitrary definitional changes created to make the market appear smaller.  In other words, Central bank monetization of essentially everything has created all manner of financial lunacy imaginable – with no conceivable alternative other than to continue inflating.  Inevitably – and most likely – hyperinflation will break out; and if not, revolution will do the same job as an increasingly desperate “99%” give the “1%” the “Louis the Sixteenth treatment.” However, we haven’t even broached the most alarming news yet – which surfaced just last night; i.e., the Fed is in preliminary discussions regarding the implementation of bond fund “gating” procedures.  In other words, preparing for bond fund runs with measures to prevent withdrawals just as insolvent banks are preparing for banks runs with “bail-in” procedures.  Frankly, such discussions are no different than the House of Representatives’ 2009 debates regarding the potential confiscation of IRAs and the 2013 Cyprus bank bail-in itself; and thus, scare the living daylights out of us.  True the Fed could simply hyper-inflate the markets ad infinitum, as noted above.  However, hyperinflation is not just limited to markets, but actual items of real value like food and energy.  And thus, they must prepare for the accompanying societal catastrophes that would go hand in hand.

Given these blaring red sirens of pending financial ruin, why anyone would keep money in a bank or significant positions in overvalued financial assets is beyond us – let alone, as the era of negative interest rates approaches.  Conversely, such manipulation has afforded a rare window in history when the safest most logical assets also happen to be the most inexpensive.  In my 12 years of PM ownership, never have they been more undervalued, nor more necessary to one’s survival.  Give us a call at 800-822-8080 and we’d be happy to answer any questions you have!