The One Chart That Says It All

It’s Tuesday morning, and the way things are going, this bronchitis could be with me for some time. Fortunately, I can still type – and think. However, clinically speaking, I am “light-headed” due to my inability to breathe normally. And thus, while you’ll still get the gist of my thoughts this week, they may be a bit “jumbled” at times.

That said, it’s one of those increasingly common mornings where the MSM appears to have simply “given up” trying to interpret how stock and bond prices can continually rise into the a “wall of worry” so large, it climbs through the heavens, to strata far above even god’s lair. Oh, there are plenty of “horrible headlines” to go around; but at this point, care of the unprecedented, government-sponsored financial bubbles spanning all corners of the planet, the financial media – and even Wall Street itself – doesn’t even bother reporting them anymore; much less, analyzing them. Again, what could be more damning than the NASDAQ trading at its internet-mania highs above 5,000, but CNBC’s viewer ratings at an all-time low, down 75% from when the NASDAQ traded here 15 years ago? Oh, the “1%” are still watching; but as for the rest, we’re just trying to put food on the table – and worry about how to provide for our families in a “zero inflation” environment in which the cost of living is soaring. And heck, that’s just here in the States, where a “flight to liquidity” has dramatically boosted the dollar’s international purchasing power; compared to the hundreds of nations experiencing historic currency implosions; partly due to the Fed’s merciless inflation exportation, and partly the participation of nearly all governments in the “final currency war.”

Before I get to today’s topic – which I just hinted at above – I have several things to discuss. However, the first is an afterthought to yesterday’s vehement Harry Dent refutation, the “Deflation” Boogeyman. In it, I noted how my analysis was cut short by my three page daily writing limit. However, one additional point needs to be addressed today – as it is too important to ignore, and too close to an important tenet of my “investment thesis.” Not to mention, it’s an issue near and dear to my heart, given my “prior life” as a Wall Street commodities analyst.

To wit, Dent claims “another argument gold bugs throw around is that, at current prices, gold is now at production cost. There’s no way it can go lower from here,” they say. “Quite honestly, only a miner could say that with a straight face…as when there’s deleveraging, financial assets and goods don’t fall back to fair value…but way below in a crash and financial crisis.” (To wit), “isn’t fracked oil way below its cost of production? That hasn’t stopped oil from sliding inexorably down. Nor will it stop oil from falling as low as $10 or $20 a barrel…”

First off, the price of gold – and particularly silver – is not just below “production cost” for the vast majority of primary mines, but the long-term sustaining cost of the entire industry. Care of nearly two decades of Cartel price suppression – which I assure you, wouldn’t ever cross Dent’s mind – the industry has not only made essentially ZERO material discoveries, but has all but stopped exploring altogether. Throw in the exponential cost increases involved in exploring, developing, and producing – which expand dramatically as cash starved nations start to consider Precious Metals “strategic resources” (see the recent experience of Venezuelan and Greek mining projects), and our expectation that “peak gold” has already passed is nearly unassailable.   Moreover, given current expectations of the world’s largest gold miner, Barrick Gold, I wouldn’t be surprised if Precious Metals’ production profile looks eerily similar to that of shale oil in the coming years; albeit, a tad less dramatic.

More importantly, his comparison between Precious Metals and shale oil “holds no water” – to paraphrase Mona Lisa Vito in My Cousin Vinnie. To wit, whilst nearly all shale oil producers have production costs – and certainly, long-term sustaining costs – above $56/bbl, the vast majority of global production is far more efficient. True, heavily socialized OPEC producers – like Saudi Arabia, for instance – base government spending budgets on prices as high as $100/bbl; and thus, are forced to drain currency reserves to “pay the bills” despite profitable oil production. However, from a pure economic standpoint, the industry’s average cost of production is closer to $20-$40/bbl than today’s $56/bbl. And thus, it wouldn’t surprise me one bit – “oil PPT” and all – to see crude oil trade that low in the coming years. Heck, I all but predicted as much myself, in January’s “direst prediction of all.”

In other words, whilst the financially “deformed” U.S. shale industry may be well below its production costs, the global oil industry is decidedly not. Equally importantly – as discussed in February’s “supply response” – global energy demand is decidedly weakening, whilst gold and silver demand, as noted yesterday, is at or near all-time highs. In fact, irrespective of the heinous Cartel’s vicious, relentless, capping activities, the gold “bear market” ended more than a year ago in nearly all countries – except, of course, the one whose “reserve currency” is attracting dramatic inflows of “fear capital.” Sometime soon, perhaps very soon, said “New York Gold Pool” will be overwhelmed by reality as well; and when it does, we will truly see just how bass-ackwards Dent’s reasoning is. But then again, this is the man who at the top of the internet bubble in 1999, predicted Dow 41,000 and NASDAQ 20,000 by – get this – 2008; followed by his equally wrong-footed prediction, in April 2011, that the Dow would fall to 3,000 by – drum roll please – 2014.

OK, enough on this topic. Hopefully, you understand that the newsletter industry has a distinct need to attract and maintain subscribers. As noted yesterday, the means of doing so – aside from being the “one in a million” investor with a long-term, above average track record – often involve a variety of psychological tricks that prey on weak minds. Resist the urge to believe what such “seers” claim – particularly if it involves claims of “proprietary” knowledge; and instead, do your own due diligence. Trust me, the alternative media – such as the Miles Franklin Blog – provides as much free information as you could possibly require; none of which compels you to make short-term speculative investments in historically overvalued, rigged financial markets.

Back to this morning, the “horrible headlines” keep coming like Mike Tyson jabs circa 1988; i.e., powerfully, and relentlessly. In China, where the PBOC has unquestionably unleashed an equity mania no less powerful than the 1998 internet bubble, the concept of “7%” GDP growth is becoming so comical, even the world’s most collusively criminal Central bankers are laughing. No, China is unquestionably in a deep, expanding Depression – as history’s largest real estate, construction, and credit bubble bursts right before our eyes. No chart describes China’s real economic condition better than this depiction of free falling freight volumes; yet again, far worse than 2008. However, care of the PBOC’s maniacal attempt at orchestrating a mythical “wealth effect” recovery via stock market goosing, Chinese citizens are being herded from the largest real estate bubble ever, to perhaps the largest equity bubble. Which sadly, is no different in essentially any part of the supposedly “civilized” first world; such as in the United States of Market Manipulation itself, where goosed homebuilder stock prices and “sentiment” indices also stand in stark contrast to economic reality – such as last week’s horrific housing starts report, or this damning chart of free falling lumber prices.

Meanwhile, watching German and French stock surge whilst one of their largest creditors, Greece, is on the verge of catastrophic, continent-shattering default is one of the most surreal things I have ever seen. This morning alone, the situation has clearly grown significantly direr; as following yesterday’s imposition of Greek capital controls, it’s looking more and more like May will in fact be the end of the line for “anti-Grexit” propaganda. Greek bond yields are soaring anew, with July 2012’s “whatever it takes” spike highs clearly on the horizon; whilst the Greek stock market is plunging toward its all-time low, led by none other than what I long ago deemed the “world’s most important stock,” and “world’s most insolvent financial institution” – the National Bank of Greece; down 11% this morning alone, and 99.9% from its October 2007 high.

Yes, we are now in a “Twilight Zone to end all Twilight Zones” world – where headlines like “Fannie Mae, Freddie Mac again offer 3% down mortgages” and “more than half of global government bond yields below 1%” have become more the rule than the exception. And no one seems to question world-destroying bankers like Mario Draghi – who, fresh off this weekend’s “dumbest central banking statement ever,” actually claimed “low rates for long periods increase financial stability risks.” This, from the man who spearheaded the ECB’s charge not just to ZIRP territory, but NIRP as well. Anyhow, despite relentless – but clearly weakening – propaganda of “imminent” Fed rate hikes, the reality of ZIRP (or NIRP) to infinity is slowly but surely seeping in. As clearly, in the terminal phase of history’s largest Ponzi scheme – where global debt explodes exponentially – the reality of the necessity of low or no interest rates is becoming “mainstream” knowledge. Inevitably, the issuer of the world’s reserve currency will be forced to admit as much overtly; and when this “Yellen Reversal” inevitably arrives, God himself would have trouble leading the gold Cartel’s ragtag, ammunition-less forces.

With that said, let’s move on to the “one chart that says it all” – of just how pervasively government interference has engulfed what were once freely-traded, rational expectations-based financial markets; and just how dangerously overpriced essentially everything has become, care of history’s most maniacal, global scheme of money printing, market manipulation, and propaganda.

Per below, not only are there more financial bubbles today than ever, but even the rate of growth in said “bubblicious” markets is bubble-like. I’m sure it surprises no one that the chart started going parabolic after the gold standard was abandoned in 1971; really parabolic; after the global economy peaked at the turn of the century; and hyperbolic after the financial system broke in 2008. This is a snapshot of history that will one day be viewed in awe – particularly as the one market that should benefit most from said money printing, Precious Metals, is at this point in time “not allowed” to participate in the bubble party. 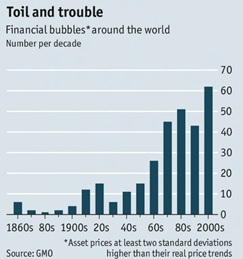 However, as sure as day follows night it will; and when it does – likely, sooner rather than later – it will make up for a lot of lost time; and then some.