The following article is very interesting.  Bill Holter has already brought up the topic for you to digest, but now the “smoking gun” seems to lie at the feet of the Bank of England

Interviewed this week on Max Keiser’s “Keiser Report” program on the Russia Today network, GoldMoney research director Alasdair Macleod discloses that the Bank of England’s reported gold inventory fell by 1,300 tonnes between February and June. Macleod speculates that this gold was used to smash the market in April to get the price back under central bank control.

The program is posted at YouTube. Macleod’s segment begins at 13 minutes and the decline in the Bank of England’s reported gold inventory begins to be discussed at the 18:40 mark.   Since that interview, GATA’s secretary/treasurer Chris Powell has been attempting to get some hard numbers from the Bank of England…and so far they are being evasive with their answers.

Holter asked the questions, “Who other than a central bank had 1,000 tonnes of physical gold to sell into the market?  Who would dump this much gold into a falling market, literally selling against themselves and guarantying the lowest possible price?”  His answer – only a central bank.  Why would the Bank of England do such a stupid thing?  Well, it depends on their motive.  Maybe they were doing the bidding of the Federal Reserve.  Does that sound crazy?  That’s exactly what the idiots, led by Gordon Brown did in between 1999 and 2002, at the behest of Goldman (the Vampire Squid) Sachs.  400 tonnes, to be exact, and at the lowest possible price.

Silver Doctors had this to say about it:

PASCOE ALLEGES THAT GORDON BROWN USED VARIOUS MECHANISMS (TELEGRAPHING THE SALE, USING AN AUCTION RATHER THAN THE LONDON FIX, ETC) TO INTENTIONALLY SELL BRITAIN’S GOLD RESERVES AT THE LOWEST POSSIBLE PRICE TO SAVE THE NECKS OF GOLDMAN SACHS’ MASSIVE GOLD SHORTS (WHICH LIKELY INCLUDED JP MORGAN WHICH WAS EVEN MORE MASSIVELY SHORT GOLD AT THE TIME).

WHEN BROWN DECIDED TO DISPOSE OF ALMOST 400 TONNES OF GOLD BETWEEN 1999 AND 2002, HE DID TWO DISTINCTLY ODD THINGS…

IT SEEMED ALMOST AS IF THE TREASURY WAS TRYING TO ACHIEVE THE LOWEST PRICE POSSIBLE FOR THE PUBLIC’S GOLD. IT WAS.

Goldman is up to their old tricks again.  The put out a sell signal on commodities right before the recent smack down in early April.  It was the “cover” for the attack that smashed gold down by $300 – it took 1,000 tonnes, to accomplish this and now it is being reported that the gold came from the Bank of England – once again in concert with Goldman Sachs.

For quite a few years, after 2000, GS was the leader of the Banking Cartel, the bullion banks that constantly shorted gold, but they eventually moved into the shadows and JPMorgan took center stage.  They’re Back!  The five most hated letters in the precious metals industry are GSJPM.  Not far behind we find Morgan Stanley and HSBC.  If the people ever really get pissed off and decide to resurrect the Guillotine, the upper management of these firms had better have a foolproof escape plan.

Do you wonder why gold is standing still, and that it seems to be the pattern lately.  Oh, it may go up $20-$30 bucks but then it falls by $20-$30.  Up and down, and it stays in the same trading range, although that range has changed a bit in the last month, but day to day, nothing happens.  Why is that?  Probably because it works best for the boyz that want to keep the appearance of stability and want all excitement removed from gold and silver.

Look at the price for the last three days – all over the place, but going nowhere.  Sooner or later it falls back between $1,325 and $1,330.  It is meant to dull your sense of urgency.  And it works. They can’t have that because there supply is already really tight. It is flying out the door and the same is true at the LBMA.  When the price rises, people call in and buy.  When it falls, demand increases.  Look at the gold inventory (from JSMineset) at Comex.  I wonder WHO is buying all of this gold???  Someone knows something.  But nah, there is no such thing as inside information, right! 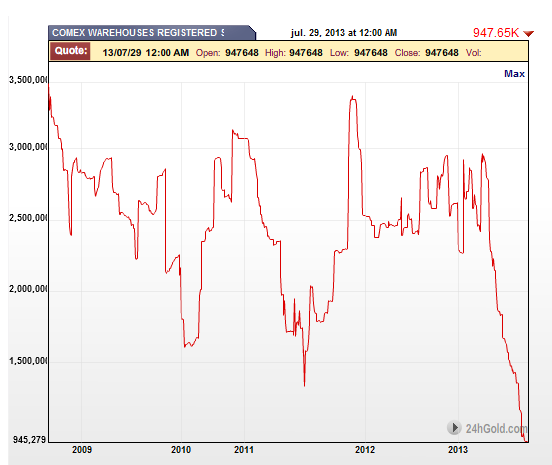 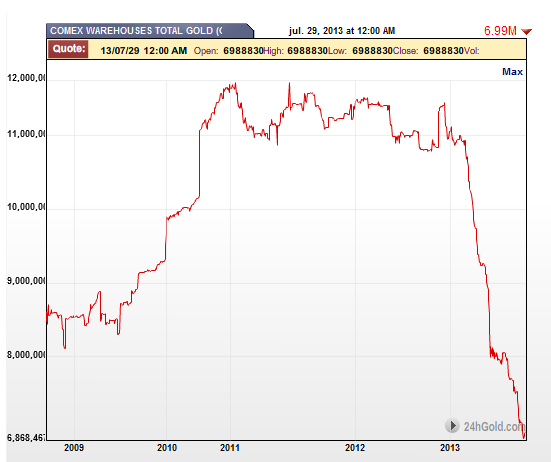 More Fed nonsense data this week – I expect the gold market to move, up or down a bit and then fall back into the same trading range, plus or minus five or ten bucks a day, moving fast and going nowhere.

One point I do want to emphasize.  The price of your gold is irrelevant unless you need to sell it now.  The only price that counts is the price you sell it for.  If you have taken to heart what we preach, gold is a long-term hold, an insurance policy and not to be sold unless necessary.  If you believe that the price will eventually go much higher, and we certainly do, then you have already won.  Hold on, knowing how the story ends.  It’s a very happy ending.  Also, buy the dips, like now.  Gold below production cost is a bargain, regardless of price.  And that’s my two cents worth for today.