The Tell-Tale Sign That the End Game is Upon Us

This weekend, I hosted a barbecue for two of the best guys in our business; Mike Krieger of Liberty Blitzkrieg and Daniel Ameduri of Future Money Trends. Like myself, Mike is a New Yorker and former Wall Street Energy analyst (he at Lehman Brothers, I at Salomon Smith Barney) who left the den of thieves to move to Colorado and join the “alternative media,” where he discusses a variety of topics from finance to civil rights to healthy living. As for Daniel, he was the face of the spectacular videos produced by the National Inflation Association in the early 2010s. However, when the site’s owners “went rogue” by shunning its raison d’etre of educating of the dangers of hyperinflation, Daniel created his own investor relations business, boasting some of the mining industry’s most well respected names as clients. Given how antagonistic the vast majority of Americans are to the concept of Precious Metals – or better put, ignorant, complacent, and clueless – it was a breath of fresh air to have them and their lovely families at my home; just as it is working each day at Miles Franklin, and communicating with the world’s “precious few” economic truth seekers.

During the evening, I was told that what separates my blog from others is the simple fact that I “tell it like it is”; clearly, with no agenda other than the dissemination of economic and financial truth. Yes, I of course sell Precious Metals for a living, but I was writing the same things long before joining Miles Franklin – in fact, as far back as 2005, when I first starting writing free missives for GATA. And given that I – and all of Miles Franklin’s principals – “practice what I preach,” in not only holding a significant portion of my net worth in physical gold and silver, but storing a significant amount at our Brink’s vault in Montreal, one would have to have a propagandistic agenda of their own to claim that I, Andy Schectman, or David Schectman have a material “conflict of interest.”

To that end, we have reached a period of market manipulation so severe – and blatant – it’s become impossible to ignore, even by the most conflicted establishment apologists. And nowhere more so than Precious Metals, where the chasm between paper and physical prices has never been wider, growing more so each day. Which, fortunately, will only expedite the inevitable “London Gold Pool-like” implosion of the Cartel, despite the very real possibility of destroying the vast majority of “paper PM investments,” as I have emphatically warned for the past four years. In fact, this weekend alone, nonsensical, “grave dancing” anti-gold articles reached a fever pitch, highlighted by Barry Ritholtz’s propaganda piece so egregious, you’d think it was written by Joseph Goebbels himself.

“Gold is bought and sold based on a narrative that has turned out to be patently untrue. As we move further away from the great credit crisis of 2008-09, the global financial system has stabilized, undercutting the appeal of gold as a hedge against catastrophe. The U.S. economy is improving, as are those of many other countries. The wild inflation and collapse of the U.S. dollar that was going to lead to the demise of civilization and make gold an essential for investors? None of that has happened. Instead the world has low inflation or even deflation and the dollar, the world’s reserve currency, has risen to multi year highs.”

Why do I bring this up? Because, especially given my dozen-plus years of association with GATA, I am the intellectual enemy of anyone that feigns free markets, whether for personal gain or due to plain old ignorance. Too much is at stake to pretend otherwise, and given admissions of market manipulation are as rampant as collapsing economic data and thieving global “leaders” (particularly relating to precious metals suppression), there’s neither a benefit nor a purpose in being diplomatic. As for “paper PM investments,” increasingly pervasive articles discussing their horrifying plights are, sadly, all too true – such as this one of a pending, massive strike in South Africa (can you believe the average South African miner makes the equivalent of barely $5,000/year, payable in a currency that this week plunged to an all-time low?); and this one, of how in the current environment, there is “nothing that not on the table” in terms of closing mines, cutting costs, and doing anything to survive the historic (and likely, accelerating) worldwide plunge in commodity prices of all kinds. Other than Precious Metals – which unlike all others, are down not due to fundamental weakness, but TPTB’s intense fear – rooted in thousands of years of historical data – that history’s most infamous “barometers of bad tidings” will cast a damning light on their collapsing fiat Ponzi scheme. Of course, in their maniacal desire to hold “dollar-priced” gold and silver down, they have inadvertently caused prices in the world’s other 180-plus currencies to surge – particularly “commodity currencies” like the Canadian and Australian dollar; the Brazilian Real; the South African Rand; Indonesian Rupiah; Russian Ruble; and countless other fiat currencies, cumulatively used by billions of worldwide denizens.

With each passing day, the evidence pointing to an imminent, comprehensive collapse in not only global economic activity, but the aforementioned, worthless fiat currencies underlying it, becomes increasingly obvious – to the point that there’s no way of pretending otherwise, which is why it’s so obvious that guys like Barry Rithholtz have an agenda, in publishing nonsensical statements like “the U.S. economy is improving, as are those of many other countries.”  I mean geez, we are unquestionably at the singular low point of global economic activity of at least the past century – with the “only difference between late 2008 and today,” for instance, being the aforementioned, maniacal market manipulations, utilizing unprecedented “weapons of mass financial destruction” like derivatives and high frequency algorithms. Mathematically, for example, the odds of gold falling on 109 Sunday nights out of 111; or 487 of 554 opens of the London paper market at 2:15 AM; make those of a “sixth sigma” event pale in comparison – particularly in this case, as the very factors that caused gold to rise on Friday have since expanded dramatically.

Such as, for instance (in no particular order), this weekend’s Puerto Rican default, putting in question how much of its astronomic $72 billion of debt – much of it, “quasi-backed” by the U.S. government – will go down in flames. Or China’s manufacturing PMI collapsing to its lowest level in two years, taking the Shanghai stock exchange still lower, despite blatant PBOC support. Or shipping freight rates on the world’s busiest trade route – from Asia to Northern Europe – plunging an astonishing 23% last week alone, following declines in 22 of the previous 27 weeks. Or horrifying images of the “war zone” the hyper-inflating Venezuelan economy has become (but don’t worry, the Caracas exchange is at an all-time high). Or the increasingly understood realization that Greece will default on a €3.2 billion payment to the ECB on August 20th – as quite obviously, not only is no “bailout” deal in place, but never was even considered. Which is probably why, upon finally re-opening after more than a month’s closure this morning, the Greek stock market plunged nearly 20%; with what I have long deemed the “world’s most important stock” – and “most insolvent entity” – the National Bank of Greece, collapsing to an all-time low, en-route to certain bankruptcy. And by the way, isn’t it funny how the root of the work bankruptcy is “bank?”

That said, the aforementioned laundry list of global economic horrors are but symptoms of the “great deformation” caused by four-plus decades of history’s largest, broadest fiat currency Ponzi scheme – which is why historically oversupplied commodities are destined to plunge far lower than most can imagine; other than, of course, the “anti-bubbles” in manipulated gold and silver, which will inevitably yield (and in some cases, are already), unprecedented supply shortages.

This morning alone, commodity prices are in all-out freefall yet again, led by the very base metals (copper, lead, and zinc) whose production are responsible for half of all the world’s silver, given how it is principally a byproduct. Said commodity collapse – particularly in crude oil, which easily provides more revenues to sovereign governments than any other product – guarantees a cataclysmic, near-term acceleration of the current, unprecedented global economic collapse; which is why ridiculous propaganda like Ritholtz’ (“the U.S. economy is improving, as are those of many other countries“) is rapidly becoming anathema, and truth like the Miles Franklin Blog espouses increasingly embraced.

To wit, as I write the CRB Commodity Index has fallen to the “key round number” of 200 – down 2% from Friday’s close alone – having been lower on just two, extremely brief occasions since 1975; 1), in early 1999, when a “perfect storm” of anomalous factors caused oil prices to briefly plunge below $10/bbl (which I remember well, having been an oilfield service analyst living in New Orleans at the time); and 2) the immediate aftermath of 9/11. Sadly, this time is significantly different, as the reasons commodities are plunging are 100% fundamental in nature, and dramatically worse than at any time in U.S. history. And this, despite explosive Central bank money printing causing the nearly all commodities’ production costs to surge – which is exactly what David Stockman’s “great deformation” describes, and exactly what belies my unprecedented economic and financial bearishness. In the coming weeks and months, I have ZERO doubt that the 1999 and 2001 CRB Index lows will be sliced through like a knife through hot butter; and when they are, I cringe with fear as to what the world’s political, economic, and social landscape will become. And equally powerfully, anticipate unprecedented demand for the only assets that have proven to protect investors’ net worth from the ravages of hyper-inflationary monetary policy, physical gold and silver. 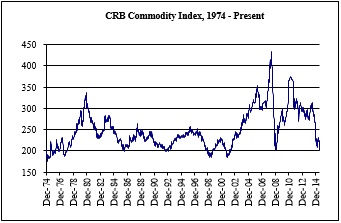 Which, if that wasn’t enough, brings me to the “tell-tale sign that the end game is upon is” – per this article from, of all places, long-time MSM lackey Bloomberg, titled “Emerging Market Central Bankers are getting nervous about their plunging currencies.” Too bad they weren’t “nervous” about such a cataclysm when they should have been; i.e., when they allowed the U.S. to unilaterally disband the Bretton Woods agreement in 1971, sentencing all currencies to a future, spectacular collapse. Which sadly, is now, as the resulting, historic fiat Ponzi scheme moves through its cancerous terminal phase.

As the article notes – espousing the previously “taboo” views the Miles Franklin Blog has emphatically spoken of for years – diluting currencies in “whatever it takes” fashion only makes things worse; to the point that today, many Central banks are being forced to raise interest rates to prevent their currencies from instantaneously collapsing. Which, amidst the aforementioned, historic global economic collapse – in which unprecedented, parabolically expanding debt levels have been built up – will only exacerbate the carnage; likely, in very short order. In other words, the “final currency war” is already proving to be a miserable, “99%-destroying” exercise in futility – as demonstrated, in spades, by the “poster child of QE failure” itself, Japan; where today, the Yen has fallen to a multi-decade low – along with the Japanese economy, and prospects for even surviving as a nation.

Trust me, when even Goldman Sachs warns “there no end in sight to the weakness in developing-nation currencies,” it’s time to put your crash helmets on. And by the way, I just love how they try to pretend it’s just “developing nations” – as opposed to all of them – especially when the very same article refers to two of the so-called “BRICS,” Brazil and South Africa, as regards their horrifying currency collapses.

In many ways, the article is as “Ritholtz-like” in its pro-dollar propaganda as it is dire in its currency and commodity forecast. That said, it unquestionably reveals the “tell-tale sign that the end game is upon us”; i.e., not only the global currency collapse we have long warned of, but Central banks’ inability to do anything but make the situation worse.