The U.S. Economy Versus Global Gold Demand – A Tale of Two Trends

Like the economic “clairvoyant” I am, I can see it now – as the FOMC concludes its upcoming April 28th meeting. With another month of miserable economic data under its belt, and the Fed’s real dual mandate – to support the stock market, and devalue the dollar – more imperative than ever, Whirlybird Janet will again attempt to “kick the can” by appeasing “recovery believers” with a hint of hawkish hope, but acting as dovishly as ever; if possible, exceeding even February’s “most unequivocally dovish FOMC statement in memory.”

Today’s topic refers to the unabashed disaster the U.S. economy has become, even after the statistical, seasonal, and otherwise fraudulent “adjustments” made by the BLS, BEA, Federal Reserve, and other manipulation agencies. Not to mention, their private “partner in crime” – the newly IPO’d “Markit” company, whose “job” is to produce statistically insignificant “island of lies” diffusion indices. Heck, today’s topic was decided upon before this morning’s spate of economic horrors, “adjustments” and all; starting with the fourth straight retail sales “miss” – the first time this has occurred since…drum roll please…late 2008. Moreover, when excluding auto “sales” – which I mock, as nearly all such “sales” are either leases or subprime loan financed; retail sales barely rose in March, after falling the three prior months.

Next up, the PPI “inflation gauge” came in well below expectations – giving the Fed further ammunition to defer its mythical “rate hikes” indefinitely; and at the same time, insult 320 million Americans whose cost of living continues to skyrocket. Then came the NFIB Small Business Optimism Index – which instead of the expected flat reading, plunged from 98.0 to 95.2; which not only was its lowest reading in nine months, but included the lowest “hiring plans” component in six months. Throw in the beginning of what will undoubtedly be a massively disappointing earnings season – with Johnson & Johnson lowering guidance due to a “strong dollar”; and it becomes painfully obvious that the Fed is boxed in a corner – desperate to purport “recovery,” but realizing it must relentlessly print fiat dollars if it wants to prevent not only instantaneous economic implosion, but dramatic losses in the rapidly escalating “final currency war.” This is why rates are plunging anew (benchmark Treasury yield down to 1.85% as I write Tuesday morning), joining the rest of the QE-escalating world despite unrelenting propaganda regarding when said “rate hikes” will occur – as if a measly quarter point increase would even remotely impact economic activity. And by the way, last I looked, rising rates were bad for the economy; let alone, one saddled with the largest – and relentlessly increasing – debt load in history.

Speaking of debt, the national debt has been stuck at $18.133 trillion for a month now, as the so-called “debt limit” is deferred by yet another round of U.S. government pension thefts and accounting chicanery, as it prepares to “raise the debt ceiling” later this year – which, when it occurs, will cause an instantaneous “reversal” of such tricks, causing the national debt to instantaneously rocket higher. And if Congressional Republicans attempt another messy “debt ceiling” debate – to try and look “conservative” ahead of next year’s elections (LOL), don’t forget that the President now has the ability to veto any “no” vote they cast. Of course, using “$18.1” trillion as America’s debt gauge is laughable at best, given more than $5 trillion sits “off balance sheet” following 2008’s nationalizations of Fannie Mae and Freddie Mac. Not to mention, the true measure of U.S. government liabilities – per Laurence Kotlikoff, who measures on balance sheet debt plus unfunded liabilities to be $210 trillion, growing exponentially larger with each passing year. I mean, geez, even the government’s own “Congressional Budget Office” – using the most wildly optimistic assumptions of long-term economic growth and interest rates imaginable, projects this horror of a debt/GDP ratio for the next five decades; rising from 100% today (heavily understated by accounting gimmicks, I might add) to twice that amount fifty years from now. LOL, at the rate we’re really going, we’ll be at that level in less than half that time!

And then there’s exponential growth in “non-revolving” debt – principally utilized for undischargable, non-productive student loans, and the aforementioned subprime auto loans; which, accounting chicanery aside, aren’t really funding “sales” at all. Since the 2008 crisis, U.S. non-revolving debt has exploded by more than $1 trillion, or 60% of the pre-crisis level. Conversely, “revolving” – i.e., credit card – debt is down 20% from the pre-crisis level; partly due to write-offs, and partly the inability of over-indebted Americans to add to such burdens.

In fact, March’s nearly $4 billion revolving debt plunge represented the largest monthly decline in five years; and this, after three straight months of falling retail sales.   Worse yet, the National Association of Credit Mangers’ “Rejection of Credit Applications Index” suffered – again, last month – its largest ever crash, breaching even the spike low at the height of the 2008 crisis. But don’t worry, as despite negative consumer spending and corporate capital expenditure growth (aside from stock buybacks at record valuations); steadily declining housing prices; and across-the-board weakness in essentially all aspects of the global economy, the “de-coupled” U.S. economy continues to “recover” – whilst the Fed prepares to raise rates, plunging market yields and all, “any day now.”

Heck, even if Greece defaults on hundreds of billions of Euros worth of debt this summer – causing other PIIGS to join the debt jubilee party, no less – the U.S. will undoubtedly remain “decoupled”; with lollipops, unicorns, and a pot of gold wheelbarrow full of dollars for all. And putting the nail in the coffin of any remaining optimists, all the aforementioned trends are mathematically irreversible – especially if rates were to rise even a tiny bit. No, the only way the world can extricate itself from the hundreds of trillions of debt history’s first global fiat Ponzi scheme has enabled is a giant debt jubilee; either explicitly, via outright default; or more likely, implicitly, via hyper-inflation.

Conversely, no trend could be more starkly opposite to the inexorable collapse of global economic activity than the relentless rise in worldwide Precious Metals demand – which currently is being dominated in the East, but shortly will be joined by the West. Frankly, the fact that Western demand is not rising faster – particularly in nations where gold prices are surging, like Japan, the UK, and the entire Eurozone – is a testament to just how effective the past four years of money printing, (paper) market manipulation, and propaganda have been. Much less, five decades of brainwashing – in which fiat currency, not gold and silver, are said to be “money”; and Keynesian monetary and fiscal policy – in which the government micro-manages the economy – is fool-proof. And, I do mean fool.

As for PM demand, what more can be said than what I discussed last week – of how Chinese gold demand is running nearly 15% above last year’s record level through this year’s first quarter? Or how Indian gold imports, despite the unexpected retention of 2013’s onerous 10% import tariffs, has literally exploded due to a combination of weakening economic activity, a plunging Rupee, and plunging confidence in the “world’s worst government,” not even a year after being voted into office. Together, India and China are now consuming essentially all of global production, leaving nothing for the other 4.5 billion other people.

Or better yet, per this article, the fact that Central bank gold purchases (at least, the ones officially reported) surged last year to a nearly 50-year high; calling to question, of course, how on Earth prices declined. Of course, the answer, pure and simple, is the Cartel has been naked shorting gold and silver with a vengeance since they peaked – in dollar terms – four years ago; in a desperate attempt to, first and foremost, “kick the can” as long as possible; and equally so, enable TPTB to pray that somehow, “Economic Mother Nature” can be defeated.

Of course she can’t; but as they say, hope springs eternal. At least, until said powers that be lose control of the financial markets they so desperately need to tell the message they want told. Clearly, Economic Mother Nature is winning, and in a big way; as everything from economic activity, to commodities, currencies, and social and geopolitical stability is dramatically declining. To wit, all that’s left are “last to go” markets like the “Dow Jones Propaganda Average” and paper gold and silver; and shortly, perhaps very shortly, they too will be liberated by the “unstoppable tsunami of reality.” Let alone, as even the so-called “inventory” said “powers” purport to have is comically low – like the eternally collapsing COMEX “registered” (available for purchase) gold cache; at just 550,000 ounces, worth a measly $657 million – an amount so small, even Greece might be able to conjure it up for its next interest payment. 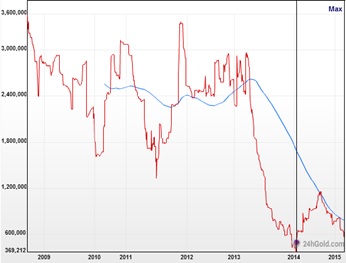 Frankly, I’m not going to dignify this article by speaking of the heinous PM raids of the past two days. Fortunately, prices are rebounding smartly as I write; but honestly, what more is there to say except that one has to be an idiot to not realize what’s going on here? And for anyone relying on newsletter writers for their “proprietary analysis” – of why gold is going below $1,000/oz (mining industry be damned), or other speculative, sensationalist gibberish – shame on you. Trust me, after 25 years in the markets – in which, atop said experience, I have become in expert in spotting manipulative practices – there is no “secret” to what’s going on beyond Occam’s razor. In other words, the war between truth and fraud will rage on until truth eventually wins decidedly; and anyone “betting” otherwise will be deposited in the gargantuan dustbin of historical financial failures.

Personally, I sleep the “sleep of the just” with my portfolio of physical gold and silver; and hopefully, you too will see the wisdom of such a decision. And if you do, we humbly ask you to give Miles Franklin the chance to earn your business; which we assure you, we decidedly will!