Today (Monday), let’s start with the “horrible headline periphery”; i.e, topics ugly enough to single-handedly take the economy down – and markets, rigged or otherwise – but not “sexy” enough for the sensationalism seeking MSM to report on. Such as, for example, the dramatically worsening droughts in California and Brazil – which, as we discussed a year ago – are major exporters of some of the world’s most important, widely used agricultural commodities. It shouldn’t surprise anyone that Brazil’s economy and currency have collapsed – or conversely, that Real-priced gold has surged to within 1% of its all-time high. Heck, Brazil’s largest company, the massively corrupt, state-owned Petrobras oil company, was bailed out by the Chinese last month.

As for California, it was one of the most financially challenged states before the drought began – currently, holding $425 billion of debt, excluding more than $200 billion of “unfunded liabilities.” And that’s just at the state level; as countless cities, counties, and lesser municipalities are heavily indebted as well. Consequently, the potential economic ramifications on its 39 million citizens – let alone, the other 280 million Americans that must bail it out – could be catastrophic. And no, it’s not just California in terrible financial condition, but nearly all U.S. states. To wit, despite 70 months of economic “recovery” – one of the longest in U.S. history – the States, on average, have barely half the cash reserve levels held at the “end” of the 2008-09 recession. Yes, a “recovery” in which the Labor Participation Rate has plunged to 38-year lows; government entitlement participation has risen above 50%; home ownership and small business formation have collapsed to multi-decade lows; real household income continued its secular decline; government deficits have surged; and debt on all levels – from Federal, to state, municipal, corporate, and individual – have continued to rocket higher. Even massively “upwardly biased” GDP has barely budged higher – and this, incorporating an historically understated inflation deflator. And yet, care of history’s most maniacal market manipulation scheme, stocks relentlessly surge higher – bereft of not only material downticks, but volatility as well; as the largest financial bubble in history is inflated inexorably higher; not just here, but everywhere. 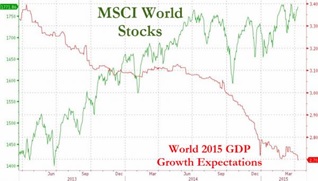 In Europe, the ECB’s psychotic, hyper-inflationary QE policy has, in just one month of operation caused the Euro to collapse to a 12-year low of 1.05/dollar – which as I write, is on the verge of being breached.  Over the weekend, the only material news was the rapidly worsening “negotiations” between bankrupt Greece and its Eurozone masters – to the point that vulgarities were spewed across the bargaining table.  I mean geez, just how hard do people need to be pounded over the head that “Grexit” is guaranteed – likely, within months?  And that if German banks are expecting massive losses due to the collapse of a single Austrian bank; that they – and those of France, Italy, and the rest of the Eurozone – will be utterly devastated when Greece and its insolvent banks default on hundreds of billions of Euro-denominated debt?  Let alone, the likely political, economic, and financial chain reaction it will cause; likely, destroying the Euro itself

And geez, to say the European economy is “fragile” is perhaps the understatement of the century; particularly in the UK, who most people assume is doing fine because of its ability to print its own money – and of course, its role as America’s lapdog. Well guess what? Not only does the UK have the world’s largest debt burden – at more than 500% of GDP, when combining government, corporate, and household finances with the world’s most indebted banking sector; but one of its biggest businesses is North Sea oil and gas exportation, whose outlook could not be worse. Like the U.S., the UK’s post-2008 housing “echo-bubble” has been focused principally in high end markets fraternized by the “1%” privy to Central bank largesse; like the U.S., amidst a rapidly weakening economic outlook that has prompted the BOE to maintain zero interest rates for the past six years – whilst, like the U.S., suspending its massive QE program – at least overtly – until further notice.

Here in the States, contrary to the relentless propaganda, it couldn’t be more obvious that said bubble peaked nearly two years ago (just look at lumber prices, if you need more evidence). However, at least the top end of the market has thus far maintained most of its gains. Conversely, the UK has seen a devastating 80% plunge – yes, 80% – in the sale of “1% homes” priced above £2 million in the past year. This, my friends, is what a Central bank printing press bubble implosion looks like; and thus, why the Bank of England – like its criminal counterpart in the States – will likely need to ramp up QE in the near future. Likely, no less, as the pound is crashing through the 1.40/dollar level that represents the lowest level it’s ever traded at – with the brief exception of a few months 30 years ago.

On most days, that horrifying statistic – representing what happens when QE is stopped for a second – would qualify as “the ugliest economic data I’ve ever seen.” However, today it doesn’t hold a candle to what’s going on in other parts of the word; specifically, China, where the only thing capable of matching its historic credit, construction, and real estate bubble collapse is its stock market bubble inflation, which has exploded higher with maximum retail participation – and leverage – since the PBOC started easing monetary policy last summer; promising much more of the same. 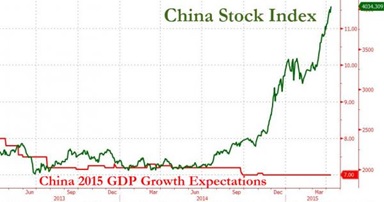 Which brings me to the namesake of today’s article, directly from the People’s Republic of Communist Economic Destruction itself; i.e., the most hideous trade data since 2009, amidst the worst financial crisis of our lifetimes.

Yes, whilst the Chinese, Japanese, and Hong Kong stock exchanges rise parabolically, Chinese imports are plunging, and exports utterly imploding. Frankly, it is difficult to find a better measure of global trade activity than Chinese exports; and when combined with ugly Chinese import data, the picture is one of worldwide recession, if not depression. This is why global ZIRP, NIRP, and QE programs are all but guaranteed to accelerate; likely, right now. Moreover, the expanding economic carnage is why the Miles Franklin Blog has loudly predicted a dramatic – perhaps imminent – Yuan devaluation; i.e., the political, economic, and social “big bang to end all big bangs.” To a man, it is difficult to conceive how the most blatant currency manipulators on the planet are not actively planning to de-peg the Yuan from the “helium balloon” the dollar has become; as not only is China’s manufacturing market share being stolen by Japan and other currency immolating nations, but competition is becoming fiercer due to inexorably weakening economic conditions.

In its wake, the dollar index surged back to nearly 100 this morning – NOT due to U.S. economic strength, but a “flight to liquidity” as the global economy implodes; as not only was the Euro challenging 1.05/dollar for the second time in a month, but the Yen was nearing its recent Central bank “line in the sand” at roughly 121/dollar. A Japanese official was trotted out to jawbone the Yen marginally higher; but clearly, both currencies are heading to dramatically lower levels, putting increasing pressure on the Fed to respond to the White House’s recent warning that a “surging dollar is causing headwinds to U.S. economic growth” – naturally, by stepping up the “final currency war” with “additional easing measures.”

This is why TPTB are so maniacally manipulating markets, attempting to buy as much time as possible until “Economic Mother Nature” attacks with the full strength of her invincible forces; like taking the “Dow Jones Propaganda Average” nearly 100 points higher at the NYSE opening, after being down all night – or attacking paper PMs for the 93rd time in the past 95 Sunday nights; the 416th “2:15 AM” open of the London paper market in the past 476 trading days; and the 8:20 AM EST COMEX opening, via prototypical “Cartel Herald” algorithm, when all else fails.

That said, “Economic Mother Nature” has a few tricks up her sleeve, too – like the dissemination of truth, which always wins out in the long run.  For one, the mining industry implosion, that all but assures “peak gold” has arrived, per the horrific outlook of the industry’s largest producer; which was further validated by this morning’s merger by junior producers Alamos and Aurico (stocks down 70% and 80%, respectively, in the past three years) – enroute to the inevitable, massive cost-cutting driven mergers of Barrick, Newmont, and countless other PM producers and explorers.

Not to mention, the fact that – propaganda aside – Precious Metals have had no discernible correlation to the “dollar index” in more than a decade; or, for that matter, “rising interest rates” in any significant time frame – particularly when rate increases are due to hyperinflationary monetary policy. And last but not least, kudos to my good friend Steve St. Angelo, whose latest article uses the lost art of mathematics to prove the ridiculous conspiracies about “Yamashita’s Gold” and other supposed “hidden gold hordes.” Not that, if they indeed existed, they would they even come close to matching the amount of dollars, Yen, Euros, and other fiat toilet paper supposedly supporting them. However, the fact of the matter is that it’s financially and logistically impossible for such excess amounts to have been produced undetected in the first place.

In other words, the inexorable explosion of Precious Metal demand will only be matched in intensity by the relentless decline of gold and silver production for years to come; as not only is it becoming exponentially harder to find, permit, and produce gold and silver; but care of the Cartel’s relentless price suppression of the past two decades, the financing of such activities has all but collapsed. This, my friends, is why Precious Metals are the greatest value in the entire scope of global financial markets; more so, in our view, than at any time in history.