We have something very important to say today, but before doing so, want to keep the expanding worldwide economic collapse front and center.  In our view, the universal “realization of reality” is the most likely cause of the inevitable systemic financial crash – and conversely, the “reclaiming” of gold and silver’s rightful roles as the world’s only real money.  Let’s start with China, where it’s “miraculous” 10% equity surge this month is due to one thing and one thing only; i.e., the initiation of a new QE program, sans the fanfare of MSM-hyped boondoggles like FOMC, ECB and BOJ meetings.

Lost in the relentless – and in most cases, clueless – propaganda is the dire fact that China’s historic real estate and construction bubble is collapsing.  Without even noting the epic recklessness of its unregulated “shadow banking” system and fraud of recently uncovered collateral hypothecation schemes; the charts below depict the reality that the “world’s growth engine” is dead in the water and how it came to be. Meanwhile, the decidedly not “contained” Portuguese banking crisis is, as we anticipated starting to spread; ironically, amidst the world’s worst Ebola epidemic on record.  Yield spreads are widening across Europe; particularly in PIIGS like Greece which we still view as high on the list of candidates to catalyze the inevitable “big one.”  And last but not least, TPTB are having an increasingly difficult time masking the reality that America is not only not “recovering,” but in many ways leading the global collapse.  Sure, they continue to baffle the clueless financial media with an onslaught of meaningless arbitrary “economic data,” but the reality of economic decline is becoming more obvious each day.  To wit, the increasingly laughable NFP employment report in which we’re told that in the first seven months of 2014, 532,000 “birth/death” jobs were created by unreported business start-ups.  I’d tell you how many birth/death jobs were created in 2013, but since the government is constantly “recalculating” the number – and thus, not publishing historical figures – the best I can do is report the 866,000 new “jobs” supposedly created in the last eight months of the year.

On that topic, my first question is how new business start-ups can go “unreported” especially if the government wants to collect taxes from their owners.  Secondly, given that the only age group to have experienced net positive employment growth since the 2008 meltdown is 55+, predominantly via part-time, minimum wage jobs, is it really believable that this group is starting up businesses en masse?  Third, if said businesses are not earning money than what positive impact are they having on the economy?  And finally, as the below chart demonstrates since the 2008 crisis, more companies are closing than opening.  In other words, the “birth/death” model should unquestionably be leaning closer to “death” than “birth”; and thus, instead of reporting a mythical 80,000 new jobs per month, a more appropriate BLS rendering would be 80,000 job losses.  Which, by the way, is what the 35-year low in the Labor Participation Rate depicts; as well as record high government entitlements, record low savings and home ownership, record high subprime and student loans, etc. 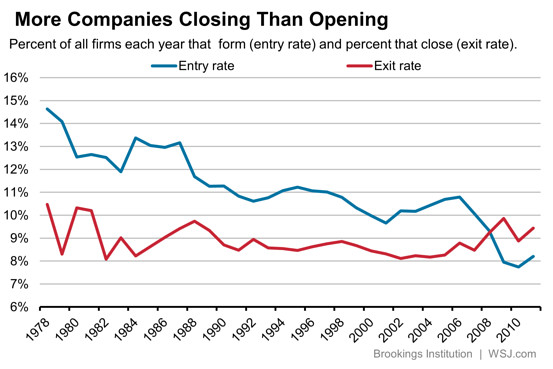 Frankly, it surprises us there’s still a “debate” on PM suppression as essentially every financial market has been found to have similar issues – not “coincidentally,” since markets were commandeered by Central banks following the 2008 crisis.  On a personal basis, few topics are more serious than market manipulation; as given my skill-set as a Wall Street-trained financial analyst, my livelihood was predicated on freely traded markets.  Unfortunately, the “President’s Working Group on Capital Markets” ceased its mandated role of “emergency mechanism” morphing into a 24/7 propping scheme around 2001.  Likewise, mere weeks into my initial foray into PM miners in 2002, it became patently obvious that gold and silver prices were suppressed.  Not to mention, the overt manipulation of interest rates by the Federal Reserve and covert mandate of the “Exchange Stabilization Fund” to manage foreign exchange and gold.  Since I learned these troubling ominous truisms, I have been forced to continually “re-invent” myself to avoid career extinction – which frankly, has been the most stressful situation I have ever dealt with.

By my observation, the level of intervention has increased exponentially since the global economy peaked in 2000, in line with the “manipulation motto” I created roughly a decade ago – “each day worse than the last.”  I first realized it after the post-9/11 PPT buying spree, but clearly it was after 2008 when manipulation really kicked into gear – of all financial markets.  And the beauty of it all, is I have painstakingly chronicled it for posterity as in the two “Dow Jones Propaganda Average” articles penned in 2012.  In those articles, I demonstrated how “dead ringer” algorithms are used around 10 AM EST nearly every day to prevent significant declines – and sometimes, to create “rallies” that wouldn’t otherwise occur.  “Coincidentally,” 10 AM EST coincides with the Fed’s New York-based “Permanent Open Market Operations” – which, in layman’s terms means “injecting liquidity” into the banking desks of “TBTF” banks, which in turn “inject” them into markets.  All one has to do is view yesterday’s and today’s Dow action to know what I’m speaking of as “good news,” “bad news,” or no news, the world’s most widely watched index is no longer “allowed” to materially decline.  Perhaps that’s why nearly all conceivable valuation measures are pegged above the 2000 highs amidst the worst global economic environment of our lifetimes.

Notably, such manipulations may be consistent generally; but irrespective, have changing near-term “goals.”  In other words, while the Fed is clearly “QEing” to maintain record low rates amidst history’s largest debt edifice it sometimes deems rate support more imperative.  To wit, we penned “3.0% – ‘Nuff Said” in January to describe the lengths it was going to prevent yield spikes, such as the creation of “mystery Belgian buyers” when Chinese selling accelerated.  Conversely, in May’s “2.6% – ‘Nuff Said,” we demonstrated how the Fed was equally afraid of plunging interest rates debunking their relentless “recovery” propaganda; i.e., the “most damning proof yet of QE failure.”

However, when it comes to PMs there is not the slightest bit of “subjectivity” in TPTB’s goals.  Which is, the same as the previous 600 issuers of fiat currencies, all of which saw their worthless scrip collapse against the timeless, intrinsic value of real money.  The 1960s “London Gold Pool” is the most recent example of an overt PM suppression scheme, but today’s is a much different animal – in that theoretically, PMs are not only “freely-traded,” but globally so.  Consequently, the obstacles the U.S.-led “Cartel” face are gargantuan – and already, it’s become crystal clear that the current effort encompassing 20 years according to the “Speck-tacular” book published by Dmitri Speck is nearing the end of its “shelf life.”  In the final analysis, there’s only so much physical gold in existence, and most of it has “emigrated” from West to East where it will permanently stay.  Sooner or later, the West’s “gold bankruptcy” will be realized; and when it does, the “end game” of currency collapse will commence.

Regarding “proof,” GATA has presented it for the past 15 years, and I am proud to have been an integral part of its efforts since 2002.  Bill Murphy and Chris Powell have spearheaded a global effort to expose the most harmful manipulation in the history of financial markets; and from them, my “life’s calling” emerged, which is why I am honored to educate of precious metals reality at Miles Franklin.  I’ve been documenting this criminality for a decade including the 375-page “manipulation primer” that can be found in the “newsletters” section of our blog, via five “special” reports published in 2011.  There’s literally volumes I could speak of on the topic – in sum total, unequivocally proving the point.  Essentially, it is statistically impossible for such a steady stream of “sixth sigma” events like “dead ringer” algorithms to occur – and nowhere have they occurred more so than in precious metals – day in and day out, at multiple “key attack times.”  Dmitri Speck’s 20-year chart is a perfect depiction of how the Cartel focuses on the close of global physical trading – and the open of New York paper trading – to do its dirty work. The evidence is irrefutable, and yesterday’s largely unreported news that JP Morgan was charged and fined by the CFTC of “repeatedly submitting inaccurate large trader reports” solidifies the fact that the world’s dominant “price setting” mechanism, the COMEX is hopelessly corrupt.  If the disclaimer it started adding to COT data last June wasn’t enough to convince you everything published by the CME is fraudulent…

The information in this report is taken from sources believed to be reliable; however, the Commodity Exchange, Inc. disclaims all liability whatsoever with regard to its accuracy or completeness.  This report is produced for information purposes only.

…or the fact that gold “dealer inventory” hasn’t changed in months; or that prices decline before every options expiration; or that “flash crashes” outnumber surges by perhaps 100:1; or that the theoretically impossible condition of “backwardation” is becoming the rule rather than the exception; then go on believing in the COMEX as an honest means of discount future economic trends.

Otherwise, join TRUTH TELLERS such as the Miles Franklin Blog in their quest to grasp and educate of economic and financial market reality.  And oh yeah, to protect yourself – and others – from the inevitable financial collapse coming at us like a Category 5 hurricane.