It’s Friday afternoon, shortly after the market close. The PPT could not have been more blatant – for the second time this week, and ninth in the past two months – preventing the “Dow Jones Propaganda Average” from falling below the key round number of 18,000. And this, with European stocks getting slaughtered, whilst Chinese stocks plunged 7% in the past two trading days! Conversely, the gold Cartel maniacally protected $1,190/oz yet again. However, given today was COMEX “first notice day” – i.e., when holders of long contracts have the ability to demand delivery – gold’s resistance to the past four days’ blatant paper raids could not be more impressive. And per today’s topic, it’s entirely possible that by next week, it will be patently clear that not enough gold exists in the so-called “registered inventory” to meet the massive claims that were still open as of yesterday.

That said, from a news flow perspective, things could not be more bullish for Precious Metals – or for that matter, bearish for essentially everything else. Comically, the “oil PPT” came out of nowhere to “rescue” oil from the relentlessly miserable news that – Middle East war or hyperinflation excepting – must inevitably crush it with as much force as gold and silver prices will surge when they, too, are inevitably “liberated” from the relentless, price-suppressing Cartel.

Regarding the former, in just the last 24 hours, we learned of renewed U.S. crude inventory builds; record Russian production; surging Iraqi production (yes, despite the expanding civil war); and a 3.3% weekly surge in U.S. production – also, to an all-time high. Throw in the fact that OPEC is all but guaranteed to maintain production quotas at next Friday’s long-awaited meeting. Not to mention, the continued, accelerating implosion of global economic activity – and you can see why fundamentally, it’s difficult to make a case for oil prices going anywhere but down. Conversely, yesterday’s blatant “copper PPT” operative badly backfired, as all five key base metals gave up yesterday’s ill-begotten, fundamentally unfounded gains – and in copper’s case, significantly more.

As for Precious Metals, what could be more bullish than yet another slew of horrific – as always, “unexpected” – economic data? To start, the Chicago PMI plunged back to the six-year low, dramatically recessionary level of 46. I.e., the same reading as in both January and February – before the Wall Street/MSM “hopium” came out in full force, when a barely expansionary 52 printed in March. As always, “the Street” was expecting another increase – until the largest “miss” in 17 months hit the tape. Next, “consumer sentiment” plunged from 98 in January, to 95 in March, to 90 in May; not only featured plunging “optimism, from 89 to 84; but the biggest collapse in “current conditions” – from 107 to 101 – since the heart of the summer 2011 mini-financial crisis. You know, when the U.S. lost its triple-A credit rating with $4+ trillion less debt than today, and “dollar-priced gold” achieved an all-time high of $1,920/oz.

Next up, the first revision to first quarter GDP reduced the (overstated, fictional) “growth” rate from +0.2% to -0.7%; again, featuring a comically ridiculous negative price deflator. In other words, Americans cost of living was purported to have declined in the first quarter. Perhaps the BEA, or Bureau of Economic Analysis, book cookers should have a look at this horrifying chart regarding healthcare cost escalation when trying to purport such lunacy – and this, before Obamacare has been fully implemented!

Frankly, I don’t think there’s ever been a time when I was so aware of the soaring cost of living – purported “deflation” or otherwise. And how about that? Care of said “oil PPT,” the brief gasoline price decline – which earlier this year, we demonstrated to be just 2% or so of the average Americans’ cost of living – has rapidly reversed. On that note, a few comments on the “double seasonal adjustments” to be applied starting in the second quarter, as part of the BEA’s new “GDP plus” algorithms. For one, if the problem is just the first quarter, why is the second quarter being adjusted as well? Next, are we to believe the massive increase in corporate inventories during the first quarter – representing the largest quarterly surge in U.S. history – didn’t occur? And why do we need to “adjust” GDP growth to positive territory when essentially all real data – from retail sales, to construction spending, factory orders, and durable goods orders – declined? And last but not least, why don’t Europe, Japan, China, and the world’s other leading economies apply seasonal adjustments? Are “seasons” in the rest of the economic world any different than ours?

Adding to the madness, the BEA simultaneously published a report claiming U.S. “corporate profits” rose 2.7% year over year – whilst the GDP report, also prepared by the BEA, claimed corporate profits plunged by $125 billion year over year, or 6%. Let alone the S&P 500, where earnings imploded by 13% over this period. Remember, “all economic data are lies” – be it here, or overseas. And trust us, at some point soon, the so-called “markets” – currently trading at Fed-fostered, PPT-aided nosebleed valuations – will eventually call such lies out, yielding horrifying plunges in real terms, be it due to hyperinflation or a 2008-style crash.

Regarding said “COMEX-IDDENT” – a play on the equally inevitable Greek Accident, or “GrAccident” – there is nothing I am surer of. That said, the how and when remain to be seen. In other words, the lunacy of worldwide gold and silver prices being determined by paper algorithms in New York – where essentially ZERO inventories exist, and physical transactions pale in comparison to those in China – must inevitably end; perhaps, far sooner than most can imagine. Not by their own hands, of course – as the odds the CFTC, or any other government entity, will do anything but stoke the fires of fraud are equal to those of Pope Francis converting to Judaism. No, as GATA proposed upon its inception 17 years ago, it will ultimately be the overwhelming of the scant remaining physical supply by surging demand that does them in.

And whilst I don’t trust a thing the CME (which owns the COMEX) publishes, there’s no way they would understate inventories, given their (government-partnered) goal of suppressing prices. Which is why today’s all-time low registered gold inventory (i.e., available for purchase) of just 370,000 ounces – worth a mere $440 million at current prices – is, if anything,

overstated. Again, I can’t understate the incredible fact that a mere $440 million of gold – if it even exists – is all that stands between the horrific, world-destroying suppression that has prevented history’s largest fiat Ponzi scheme from imploding. Yes, I know it makes no sense – as in freely-traded markets, a supply shortage that acute would be swarmed on by vulture-like traders smelling blood. However, all we can say is “give it time”; as eventually, no amount of naked shorting will be able to staunch the “unstoppable tsunami of reality.” 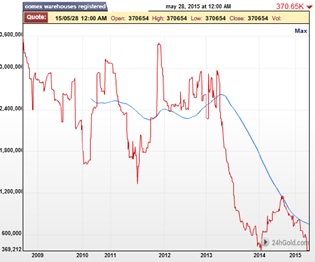 Typically, the Cartel “magically” causes the vast majority of open interest to vanish in the days leading up to “first notice day.” An illegal course of action, I might add, that invariably yields mysterious paper plunges in the preceding days – such as this past Tuesday, amidst a veritable avalanche of PM-bullish news. That said, even I was astounded when I read Harvey Organ’s blog yesterday – of how an incredible 30,493 gold contracts, constituting 3.1 million ounces, were still outstanding before today’s “first notice day.” Of course, much of those contracts likely “disappeared” in today’s trading, too, as usual. However, June is the second largest delivery month of the year (December is the first); and given the swirling confluence of gold-bullish factors, I’m waiting with baited breath to see how much is demanded for delivery.

Remember, with just 370,000 registered ounces available for purchase, barely one-tenth of said contract holders would need to demand delivery to take out the entire COMEX inventory. I’ve been around this game too long to expect anything so dramatic, absent a visible political or financial market “crisis.” However, as noted above, I couldn’t be surer it eventually will occur; by either a concerted “assault” on such inventory – by the Russians? Chinese? Arabs? – or a “COMEX-IDDENT,” in which someone, somewhere, accidentally “screws up” the suppression game. Which is exactly what may occur in Greece, if they somehow “screw up” the tightrope they are walking regarding both individual interest and principal payments and new bailout negotiations.

OK, it’s now Saturday morning – and as expected, the vast majority of open interest magically disappeared in yesterday trading; some of it, no doubt, simply rolled to the next month’s contract on this criminal exchange in which the price of valuable, highly sought after physical metals continues to be set by (heavily naked shorted) paper contracts – with roughly 90% of all global price moves occurring in the same few hours of New York trading, despite the U.S. being neither a major gold producer or consumer. Not to mention, its government – as issuer of the world’s current “reserve currency,” considers gold and silver its mortal financial enemies. Don’t worry, this untenable situation will eventually resolve itself in “Economic Mother Nature’s” favor; but for now, the Federal Reserve and its Wall Street and Washington partners in crime still hold the upper hand; albeit, with a “grip” that clearly is weakening with each passing day.

That said, we are now officially in the June contract delivery period, with 8,380 contracts still remaining open. In other words, we could theoretically have 838,000 ounces of gold demanded on Monday, versus just 370,000 ounces of inventory. Which, last I looked, would be a decided default, no matter what propaganda is spun, or accounting chicanery attempted. As noted above, in any other market, vulture-like traders would “smell blood” and demand delivery, forcing the inevitable default we all know is coming. Some commentators will claim such investors are fearful of being “shaken out” – financially or otherwise – as the Hunt Brothers were when they supposedly attempted to “corner” the silver market in 1980. However, this is not 1980, and simply demanding a few hundred million dollars of gold would hardly be considered “cornering” a market that produces $100 billion worth each year, with an estimated global “inventory” in the ballpark of $7 trillion – little of which, by the way, will ever see the light of day.

True, most COMEX “traders” have little interest in taking physical delivery – which is why the concept of the COMEX as a price-setting mechanism is so comical, particularly given the sheer volume of naked shorting fraud. However, it wouldn’t take much for such “small fry” to be scared by budding financial crises to do so. As for the world’s “big money” – like the Chinese government, for example – no one wants to “break the monetary system” with such a bold move. And for a measly $400 million of gold – which for the Chinese government, would likely represent less than 1% of their total holdings, the risk/reward of destabilizing the global monetary system would clearly not be favorable. Even America’s “greatest geopolitical foe” – as Mitt Romney referred to Russia as – has little interest in starting World War III, be it financially or militarily. And thus, it couldn’t be clearer just how important it is for the reserve currency issuing U.S. government to attempt to maintain “stability” – and thus, avoid such crises – by commandeering financial markets; with otherwise, would likely go haywire.

In other words, the global financial system continues to sit atop the increasingly unstable “fulcrum” that is the scant available gold (and silver) inventory on a largely paper-based, fraudulent exchange in New York. At some point – likely sooner rather than later – whether purposefully, out of blind fear, or by “COMEX-IDDENT,” this bastion of global financial fraud will come crashing down, “commercials” and all. And when it does, if you haven’t already secured your personal cache of such scant, invaluable resources, it will already be too late.