I hesitated yesterday to write about HSBC allegedly deciding to close their London Gold vaults because as of yet, we still do not have public confirmation.  As you know by now, Andrew Maguire made the allegation and Ned Naylor-Leyland tweeted several times over the weekend.  Gerald Celente followed with King World News and also made comments.  It is not my intention to be long winded on this subject because even if true, it is only a small chapter in John Exter’s debt pyramid theory which is what I would like to talk about today.  Specifically, the role of gold and “why”.  If true, it would however be a very important clue signaling something has changed in the London gold market.

Briefly, if Andrew’s HSBC news is true, more questions are raised than are answered.  As for the several theories I have heard, some believe the short notice of only two months would be a way for HSBC to cash settle some customers and obtain some gold.  It is believed in this manner, HSBC might be able to cover some of a short gold position.  I find several problems with this whole thing.  First, wouldn’t some of the customers have paid storage (in advance) for positions being held?  Could HSBC just break a contract on their own?  Could HSBC really tell GLD they have only two months to move their metal?  If I were a director of GLD, my fiduciary responsibility would point me toward engaging lawyers to put a retraining order to buy enough time to ensure an orderly and safe transfer.  My next thought would certainly be that of a complete audit!

Another thought of mine is this, why is there no other information on this anywhere to be found?  So Andrew Maguire and some of his clients received letters, are they real?  The shorts would love nothing better than to discredit Andrew and any other bloggers who write about the alleged HSBC move if it turns out to be false.  Is it possible Andrew is being set up?  …Along with the rest of the gold blogging world?  I believe Andrew to be very thorough in what he does and give him the benefit of the doubt in my own mind.  Maybe I am just paranoid but I hate to hear things like this without any other confirmation and particularly nothing from HSBC itself.  I will say this, the more time passes without some sort of confirmation of Andrew’s allegations, the more I am inclined not to believe them.  Enough said for now and until we have some hard data to look at.

Our topic for today is John Exter’s inverted pyramid which is displayed below. 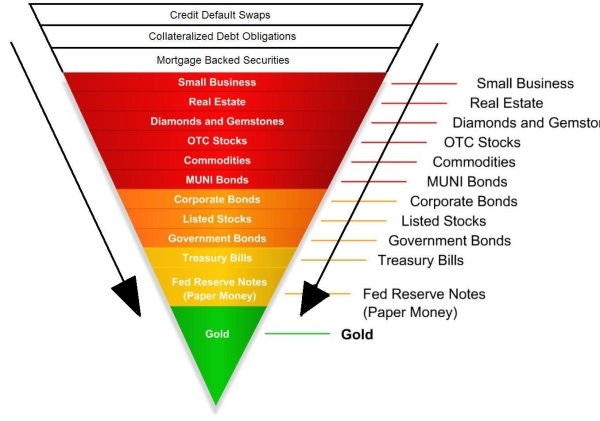 As you can see, John Exter believed the “foundation” of all things financial rested upon a small foundation of gold.  I say “small” because of gold’s rarity in relation to everything else financial and freely created by man’s mechanism.  I don’t want to make this an exercise in explaining the pyramid in a primer form.  Let me just say I agree with it and believe as you go further up the pyramid (and further away from gold), the asset classes have more and more risk.  The further up the pyramid you go, there is more “leverage” involved as each product is “derived” from something which is ultimately derived from “money” itself.

Since 1971, The U.S., followed by governments of most of the rest of the world have wanted us to believe that gold is not money.  They have “taught us” that what they print (currency) is money.  This is not so and I won’t spend the time here as I’ve covered this many times before.  Suffice it to say, the BRICS nations led by China fully understand and believe gold in fact is money as proven by their massive imports of gold.

We will specifically concentrate on the gold triangle at the bottom in this exercise with the assumption you understand the gold “foundation” is what everything financial is “derived” from.  If this is so then there is one very basic truth which MUST apply, the rule of law.  Why is this?  The rule of law applies to gold for several reasons.  First and most obvious is ownership, true ownership.  Secondly, the law of weights and measures.  An ounce, a kilo, a ton or any other measure must be fixed and of course at a specific purity level.

Cutting to the chase, the gold must be where it is supposed to be, in the correct quantities and purity.  If it is not, the rule of law is broken and with it will follow a “natural law” being broken called “confidence”.  Think about it, even the dullest knife would understand what it would mean if there was an audit of Fort Knox and it turned out all the gold was gone.  THIS is what the entire “game” has been about literally since 1971 (and even before)!  The Fed and other central banks have done anything and everything in their powers to make gold “look” weak because it is THE competitor to their paper notes, their electronic digits and thus their “power”.  For what possible reason would the Federal Reserve NOT have to suppress the price of gold?  The answer is none whatsoever!

Following this through, if you are an owner of gold or silver then you probably spent this past weekend in poor spirits because the metals were monkey hammered on Friday.  Again, more COMEX contracts hit the market in a few short hours to force price down …than there is total available gold to actually deliver.  Did real holders of real gold all of a sudden decide to collectively panic and sell?  No, the price was forced down in a psychological operation to scare people away from buying the real metal.  One lame explanation given was the Fed will have to raise rates.  I will comment tomorrow on the boogeyman of “rising interest rates”.  Rising rates it is said will be the death knell for gold and silver because they don’t pay any interest.  I will graphically and mathematically show you the U.S. Treasury will bankrupt itself should the Fed EVER decide to raise interest rates.  They simply cannot do it!

Getting back to the pyramid, what do you believe will happen to everything above the gold base if the gold really is not where it is supposed to be?  When answering this question in your mind, please remember that everything and I do mean EVERYTHING is based on “trust”.  You trust that when you put your paycheck into a bank this week, it will still be there next week and your bank will be open for you to retrieve or use the money.  You trust that when you accept dollars or euros, yen or pounds for your goods or labor, someone will accept them as payment for something else.  It’s ALL about trust or confidence and nothing else, which is the “why” part to having a rule of law.   A rule of law MUST be followed, adhered to and enforced (for everyone) in order to retain any confidence.

Let’s begin to wrap up with the statement “all roads lead to gold”.  I say this because if you look back through history, every single one of man’s “experiments” with money have failed leaving gold as the ultimate money.  “Ultimate” meaning last, final or best.  Think back to the tulip craze in Holland.  These tulips did have at least “some” value as they were pretty and needed to be grown which took some time.  How much time is needed for the Fed to create $1 trillion?  A hint might be found in the $16 trillion they created overnight and lent all over the world in late 2008 which was not even discovered until a periphery audit of the Fed in 2010!  Creating new dollars takes zero time, zero capital, zero labor and in reality is FREE.  I hate to point out the obvious but “free” meaning no real cost can also be equated to no real value.

In today’s world, perceived “money” and credit are interchangeable, they are one and the same.  In fact, the world has gone so upside down as to believe the more debt one has, the wealthier they are!  This is not so, never was and never will be.  The potential discovery of empty gold vaults is what steers Western finance and has done so since 1971. The perception of weak gold prices and abundant holdings has been paramount.  The realization or truth of empty gold vaults cannot be allowed to happen or confidence in currency will evaporate.  China knows this, Russia knows this as do many other nations which is why they have all accelerated their purchases and imports.  They are not relying on “the rule of law” being ironclad.  They are importing real metal and will not accept “receipts” in lieu of metal.

Even Western central banks like Germany, Belgium, Holland and Austria are no longer so “trusting” of London or New York.  Why is this?  For one thing, they can do the math of how much gold is being produced versus how much gold is being shipped.  They are acting by importing and repatriating because they do not want to “hope” the excess gold is not coming from their stash …because they know it is coming from somewhere it is not supposed to be!  And folks, this is it in a nutshell.  Gold is moving Eastward to the BRICS and other nations in amounts that do not make any mathematical sense unless the rule of law is being secretly and clearly broken.  What do you think?  Will gold “remaining” in the West be scarce or plentiful when the truth comes out?  If you understand Exter’s pyramid, this is a very valid and all important question!  As with any house or structure, the foundation to Exter’s pyramid is more important than anything else and for good reason…”they” want you to believe it is meaningless.