Even for me, last week was emotionally draining.  I exerted a significant amount of mental energy in my writing, plus five podcasts.  This week I have five more; and despite a thin “events calendar,” the odds of significant earth-changing events hasn’t been this high since 2008’s Global Meltdown I.  This morning, I’m going to take advantage of this morning’s (propaganda and market manipulation aided) lull to show you some pictures which cumulatively, tell a story of economic dysfunction as well as a “thousand words.”  As for said lull, don’t worry – the Iraqi military coup is nothing to be concerned about, nor American airstrikes just two years after “exiting” Iraq, nor the raging Ukrainian war, heightened Sino-Japanese tensions, or landmark Sino-Russian “de-dollarization” agreement.  And don’t worry about increased expectations of German recession; or an Italian bailout, surging PIIGS yield spreads, or plunging Chinese construction activity – as according to the captive MSM there’s “nothing to see here.”

To start, less of a “picture” than a “snip” of the key points of Friday’s miserable Canadian employment report.  Clearly, Canada’s economy is in as dire shape as America’s; and if commodity prices decline amidst a temporary deflationary shock, it could get really ugly up North.  Fortunately, Canada has far fewer people, more resources and a less reckless financial system.  However, as you can see below, it faces the same real employment issues as the States; wherein, the “unemployment rate” continues to decline, whilst the number of workers falls faster and real median wages faster still.  Frankly, if you look at any “developed” Western nation, you’ll see this same ugly pattern – which can only be “fixed” with increased government entitlements paid for with commensurate growth in money printing.

No matter where one looks, the obviousness of recession is difficult to miss – unless, of course, you’re part of the Washington/Wall Street/MSM propaganda machine.  In our recent article, “Need or Want, Demand Is Dying,” we discussed how U.S. consumer demand is declining across-the-board, even for low-priced staples.  And if the below chart of McDonalds’ U.S. sales trend over the past decade doesn’t drive the point home, what will?

The collapse in consumer demand has led to surging sub-prime lending, as evidenced by last week’s ominous announcement that FICO, the nation’s largest credit-scoring company is changing its “methodology” to enable millions of low-income Americans to become “creditworthy.”  The chart below is a perfect representation of how America’s financial sector – empowered by the Fed’s unaltered “too big to fail” mentality – has ramped up credit card approval rates to 2007’s peak levels, amidst a post-2008 environment in which cash strapped consumers don’t want more credit cards. Automobile companies have led the newest sub-prime wave, along with the king of all sub-prime bubbles, the U.S. government-funded student loan bubble.  GM, in particular, has boosted “sales” with record channel-stuffing to its dealerships; and as you can see below, essentially all new customer sales since 2008 have been in the form of leases in which the car company maintains ownership.  In other words, Government Motors has exposed itself – and U.S. taxpayers – to every imaginable business risk, amidst the worst global economy of our lifetimes.

And no chart tells the ugly story of the U.S. consumer better than the one below of total consumer debt less average employee wages.  As you can see, the consumer was barely earning enough to offset incremental debt for the past two years – until the battle started to turn against him this year, when debt growth started to accelerate faster than wage growth. 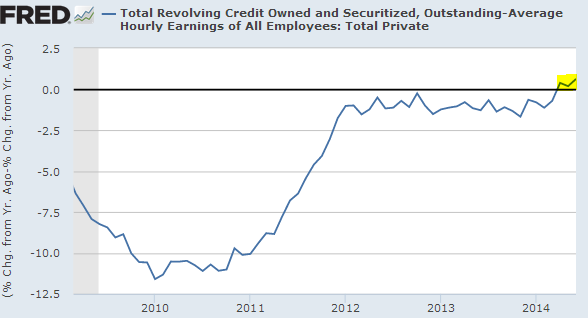 Amidst this environment, the Fed has fought reality with exponential security “monetization” – driving stocks and bonds to record valuations amidst the aforementioned, horrifying economic conditions.  To wit, retail investor cash balances have fallen below 1999’s peak level demonstrating just how much danger the Fed’s moral hazard policy has put the markets in. Worse yet, ultra-long term (greater than 30-year) bond issuance is 50% above the record levels set in 2007, whilst leveraged loan volume is nearly four times higher – as the Fed has inadvertently mixed the most lethal financial market cocktail ever. 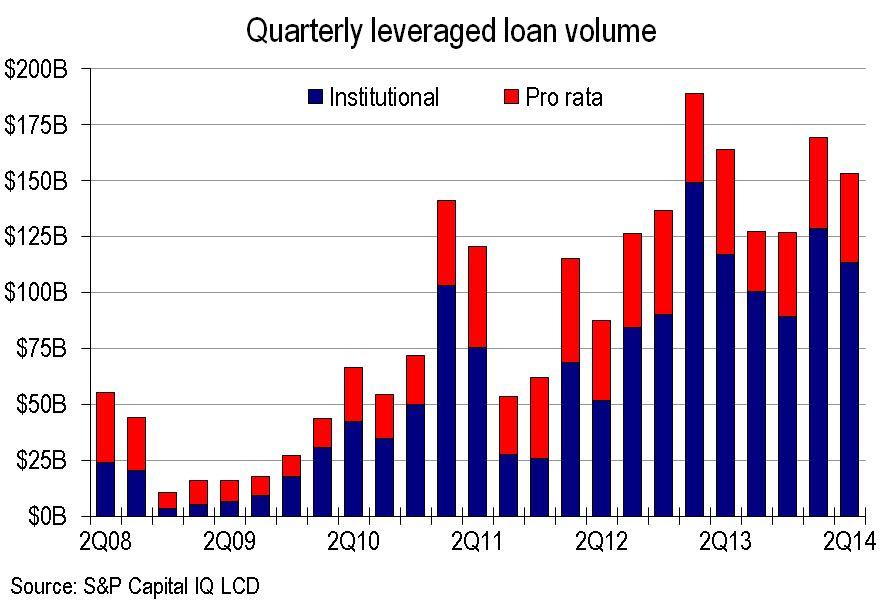 Consequently, they are probably scared senseless of the record 22 straight days of high yield fund outflows; not to mention, the “most damning proof yet of QE failure,” i.e., plunging rates amidst the so-called “recovery.”  And thus, when you see equities “suddenly” surge as they did Friday afternoon due to nonsensical rumors of Ukrainian “de-escalation” (really?), you can bet they are throwing everything but the kitchen sink at the markets. And of course, precious metals, where day after day the same algorithms are used to naked short them – despite record global physical demand.  To that end, what are the odds gold would be attacked on 59 straight Sunday nights; particularly 2014’s 30 so far, given gold is the year’s best performing asset class?  To answer the question, it puts to shame the concept of “sixth sigma events,” which have odds of one in 500 billion; as the odds of gold being taken down 59 straight times are one in 576 quadrillion.  But no, gold is not manipulated!

And last but not least, the largest “pink elephant” ever; i.e., the fact that bank-owned derivatives have decidedly not been reigned in by Dodd-Frank or any other means.  Conversely, outstanding derivatives are larger than the 2007 peak, when they nearly destroyed the entire global financial system.  Seriously, “what could possibly go wrong?” Hopefully, today’s “misery pictorial” helped to put together some of the dots – of how the Fed – together with the PPT and Congressional legislation (or lack thereof) have put the U.S. economy and financial markets in unprecedented danger.  Sadly, there is nothing that can reverse this damage – and when it inevitably implodes, if you haven’t protected yourself already it will be too late.  To that end, will Janet Yellen’s “Jimmy Shaker Day” occur this year?  And if not, just how much longer can the can be kicked?