By my estimation, the “official starting point” of the government’s commandeering of financial markets was September 17, 2001, when stocks were blatantly supported upon re-opening after the 9/11 attacks. Since then, the level of manipulation has gradually expanded – often, via PPT “trial balloons” following dramatic events like the Enron and Worldcom bankruptcies a year later. All along, the gold Cartel was doing its regular, day-to-day thing (albeit, less maniacally than today); but regarding stocks, the PPT – officially, the “President’s Working Group on Financial Markets” – was still utilized more for “emergency situations” than “day to day operations.” The 2008 crisis altered that status quo forever – although, as I have discussed ad nauseum, it undoubtedly took “TPTB” by surprise. And thus, their immediate reaction more closely resembled a “deer in headlights” than an orchestrated manipulation machine. Hence, the extremely sloppy, public debate regarding TARP; the collapse of major financial firms like Lehman Brothers, AIG, and Fannie Mae; and of course, plunging markets despite their best manipulative efforts.

Eventually, the gargantuan fiscal and monetary easing measures – and undoubtedly, covert operations like the “secret $16 trillion” Federal Reserve loans we learned of years later – enabled financial markets to temporarily rebound. However, by mid-2011, the world was in full-blown economic, financial, and market crisis – culminating with the U.S. itself losing its (ridiculously undeserved) triple-A credit rating. At this point, which I deemed the “point of no return,” the U.S. led a global effort to better organize market manipulations; as signified by the infamous “operation PM annihilation I” Precious Metal raid of September 6th, 2011 – when “dollar-priced gold“, having just hit an all-time high of $1,920/oz, was “mysteriously” smashed hours after one of the most PM-bullish news events of our lifetime; i.e, the Swiss National Bank’s ill-fated decision to peg the Franc to the dying Euro.

At that point, the rigging of stocks, bonds, and PMs increased dramatically – as not only had TPTB mastered the newest “weapons of mass financial destruction” (i.e., derivatives and HFT algorithms), but the global QE movement was shifted into sixth gear. In the U.S., the Fed launched its “Operation Twist” monetization scheme in September 2011, followed by QE3 in December 2012. Meanwhile, Mario Draghi made his equally infamous “whatever it takes” speech in July 2012 (whilst the ECB simultaneously bailed out the Spanish banking system); while in Japan, “Abenomics” was actively discussed throughout Japan’s 2012 election campaign, before being formally launched on April 4th, 2013 – which, “coincidentally,” was just a week before the historic “closed door meeting” between Obama and the heads of the top “TBTF” bank CEOs, on April 11th, 2013 – in which the stated agenda featured the “stability of the financial system.” That very day, Goldman Sachs issued a rare “short sell” recommendation” on gold, which was trading at $1,580/oz at the time; and what a surprise, on Friday, April 12th and Monday, April 15th – the “alternative currencies destruction” was launched.

In attempting to “reflate” markets so aggressively – and in doing so, create a mythical “wealth effect” economic recovery (not possible in a peak debt environment), the potential for a “market accident” – such as surging interest rates or Precious Metals – was extremely high. Thus, the rigging of such markets has since gone berserk – particularly in stocks, bonds, and Precious Metals – causing the greatest economic “deformations” in history. Moreover, said peak debt, coupled with collapsing economic activity and the resulting social and geopolitical unrest, inadvertently caused the “final currency war” to explode in nuclear fashion; yielding unprecedented global currency implosions, and with them, a whole new litany of horrifying ramifications – including an acceleration of the downward global economic spiral, yielding an historic commodity crash, explosive geopolitical tensions, and political revolutions throughout the world. And here we are today, in March 2015, just 3½ years after said “point of no return,” with the world at its low economic point of our lifetimes; debt not only at historic highs, but rising parabolically; the “final currency war” more explosive than ever; and global social discontent at unprecedented levels due to the inflation and wealth disparity caused by such suicidal monetary policies. Clearly, the root cause of this economic hell is the global fiat currency Ponzi scheme that commenced with the gold standard’s abandonment in August 1971; and equally clearly, its terminal stage is upon us. Thus, it wouldn’t surprise me if its final meltdown commences any day, either via collapsing of its own weight, or one of many potential “black swan” events.

As a career financial markets professional, it was very painful weaning myself of the stock investments that made up the entirety of my portfolio until four years ago. Actually, I sold my last non-mining stock in April 2000 – rightfully expecting the global economy to weak ad infinitum. However, I held major positions in PM miners until the spring of 2011 – when I finally gave up, realizing just how hopelessly suppressed they were. I’m still able to enjoy the thrill of the markets via my holdings of physical gold and silver – although obviously, less so lately. However, attempting to “analyze” what remains of “markets” has become near impossible due to said manipulation. Obviously, some markets continue to trade “freely” – and others, partially so; like, for instance, the world’s largest, most important commodity, crude oil. Others, like stocks, bonds, copper and Precious Metals, for example, barely resemble “markets” anymore – but in the latter case, fortunately, the inexorably bullish fundamentals of physical supply and demand will ultimately usurp TPTB’s best manipulative efforts. Ultimately, “Economic Mother Nature” will regain her footing in all financial markets; obviously, more quickly in some than others. However, as each successive market is “lost” to her powers, the odds that the others – all of which are in some way, shape, or form are entwined – doing so increase dramatically, particularly as TPTB have no control over said “black swan” events.

In recent months, I have dedicated a great deal of ink – and airwaves – to the historic crude oil price collapse, and the “island of lies” diffusion indices like the “PMI Services Index” continue to portray a “mythical services boom,” with absolutely no support from real, empirical data.

Obviously, the oil plunge’s impact is exacerbating the Ukrainian crisis, yielding the collapse of the Russian Ruble and Ukrainian Hyrvnia currencies; heightened military activity; and explosive Cold War rhetoric, particularly as Obama recently admitted America’s role in said plunge. Today’s fiery U.S. condemnation by Vladimir Putin – not to mention, the downgrade of Ukraine’s credit rating to “imminent default” status – exemplifies just how unstable the situation has become; and given Ukraine’s geopolitical importance as a continental energy hub, the ugly state of today’s energy markets clearly has the potential to blow the situation sky-high. Which, by the way, is exactly what we warned of a year ago, whilst the MSM propagandized “de-escalation.”

Of course, Ukraine no longer qualifies as a “black swan” situation, as it has been escalating for more than a year now. Will it catalyze World War III, as Paul Craig Roberts anticipates? Who knows? However, what no one was watching until yesterday was the instability in a nation far more geopolitically important, if that was in fact possible; i.e, the tiny OPEC nation of Yemen, which just happens to share a border with not only Saudi Arabia, but the narrow strait separating the Red and Arabian Seas; i.e, the world’s fourth largest oil supply “chokehold.” 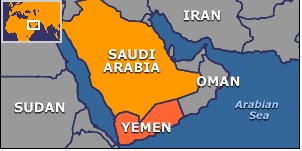 Like many Middle Eastern nations, Yemen has had a checkered history of political instability. And thus, it should be no surprise that now, following said historic oil price collapse, a bloody coup attempt has occurred, throwing the entire Middle East into disarray. Consequently, WTI crude prices are back above $50/bbl, having surged from a six-year low of $42/bbl last week despite some of the ugliest inventory builds in recorded history. To which, I point out what I have written for the past six months; i.e., “barring hyperinflation or Mideast war,” oil prices have nowhere to go but down.

Ironically, it was just Tuesday morning when I penned “the stock crash to end all stock crashes” – which, by the way, was not a short-term prediction; but, to the contrary, a broad analysis of how overvalued psychotic Central policies have caused stocks to become. Since then, the “Dow Jones Propaganda Average” has plunged 400 points; whilst gold – despite vicious Cartel contesting – has pushed back above the last month’s respective “lines in the sand” of $1,200/oz gold and $17/oz silver. Trust me, the PPT will fight tooth and nail to prevent stocks from materially declining. However, if they fail – let alone, if the Cartel, too, has trouble suppressing gold and silver – the Fed can always use said decline (“due to” the Yemeni War) as its excuse for the inevitable “Yellen Reversal” – and with it, the QE4 America’s debt addiction so desperately needs. Not to heal itself, mind you (it will only make it sicker); but conversely, to avoid it instantaneously dropping dead. Which, of course, it mathematically must; at which point, if you haven’t already protected yourself with physical gold and silver, it will already be too late.